U.S.-Russia Relations: What Would Henry Kissinger Do? 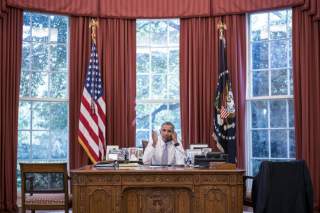 Over a public career that spans six decades, and now in his 93rd year, Henry Kissinger has been cautious about offering presidents advice in public.  But the outline of what he would say if Obama asked him about Russia is clear in the interview he gave to Jacob Heilbrunn in The National Interest’s latest issue.  Drawing on decades of experience with successive Russian leaders during the Cold War, as well as many hours of quality face time with Putin, Kissinger’s views about how the United States should manage its relationship with Russia could hardly differ more from the bipartisan Washington consensus and Obama administration policy.

First, Kissinger turns on its head the prevailing narrative about the impasse over Ukraine. In Washington, for Democrats and Republicans alike, Putin has been the prime mover in this drama, and his actions part of a grand geopolitical strategy to reconstitute the Soviet Union. In contrast, Kissinger insists that we start with the historical record: the sequence of events that led to the ouster of Ukrainian President Viktor Yanukovych in response to which Putin sent the “little green men” to Crimea. The most inconvenient of these facts is the coincidence of what happened in Ukraine and Putin’s signature project of the year: namely, showing the world that Russia could hold a successful winter Olympics in Sochi.  As Kissinger notes: “It is not conceivable that Putin spent 60 billion Euros on turning a summer resort into a winter Olympic village in order to start a military crisis the week after a concluding ceremony that depicted Russia as a part of Western civilization.”

Reviewing this history, Kissinger concludes that Putin was essentially reactive, responding to what he saw as a rush of events on the ground that would take Ukraine into the EU, and in time, NATO.  This began with an association agreement, which the EU offered Ukraine in late 2013 and which failed to take into account Moscow’s reservations about damage that the free trade component of the deal would do to Russia’s economy.  Yanukovych used this offer to negotiate an even larger aid package from Russia that would have tightened Ukrainian-Russian relations. Yanukovych’s domestic opponents responded with an uprising in Maidan Square. These protests just happened to coincide with Russia’s successful Olympic Games, where Putin was celebrating with more than 50 presidents and prime ministers from around the world (including the leaders of China, Italy and Norway).

As Kissinger notes: “No doubt in Moscow this looked as if the West was exploiting what had been conceived as a Russian festival to move Ukraine out of the Russian orbit.”  In taking the initiatives that provoked Putin, the West failed to appreciate not only the depth of the Ukrainian economy's dependence on Russia, but also as Kissinger emphasizes, the fact that “the relationship between Ukraine and Russia will always have a special character in the Russian mind.  It can never be limited to a relationship of two traditional, sovereign states, not from the Russian point of view, maybe not even from the Ukraine’s.”

U.S. and European leaders’ insistence that Ukraine was free to ally itself with the EU or even NATO sounded good in the abstract. But it ignored Russia’s views of its vital interests and Russia’s capacity and readiness to act to protect those interests. Having been invaded by Napoleon and Hitler, Russians are neuralgic about threats from their western front.  Even more than two decades after the Cold War was consigned to the history books, the Russian security establishment sees NATO as a major threat that is always seeking opportunities to move closer to Russia’s border. Against that threat, Russia’s security establishment sees Ukraine as an essential buffer.

Second, after misinterpreting the drivers and dynamics of events in Ukraine, according to Kissinger, the United States responded in a way that was bound to fail. Its strategy began by setting an unachievable goal: an objective it could not possibly mobilize the means to accomplish.  In Kissinger's words, that goal is “breaking Russia.” By that he means forcing Putin to submit to American interpretations of the U.S.-designed and adjudicated rules of international behavior. As Kissinger put it,  “the United States has put forward no concept of its own except that Russia will one day join the world community by some automatic act of conversion.”

This conversion is unlikely to be forthcoming, since Russia not only sees itself, but is, a great power with the independent capability to act where it sees its core national interests threatened. Given the country’s history, interests, and capabilities, no Russian leader would have stood by and watched Ukraine—including Russia’s major naval base at Sevastopol (which was built by Catherine the Great)—slide into a military alliance with what its sees as its principal security threat.  While Putin’s stunning approval rates among Russian citizens – now topping 80 percent – reflect in part the effectiveness of his government’s propaganda, no one who talks to Russians can doubt that he struck a responsive chord in standing up for Russian interests.

Instead of trying to break Russia, Kissinger believes America’s goal should be to  “integrate” Russia into the international order in a way that takes Moscow’s interests into account. That would begin with recognition of the realities of Russian power and interests, treating Russia like the great power that it is, and on that foundation exploring “whether their concerns can be reconciled with our necessities.”

On an array of pressing global issues, there is reason to believe that Russia’s and America’s needs can be reconciled. In dealing with the crisis in Ukraine, for example, Kissinger recommends searching for a formulation in which Kiev would be militarily non-aligned, thus satisfying Russian concerns about a buffer, but also assuring Ukraine its sovereignty and territorial integrity, which would require withdrawal of all Russian forces from Eastern Ukraine and Kiev’s control of its borders.

Terrorism is another issue where Obama and Putin could find common ground, since both the United States and Russia agree about the threat posed by ISIS and other Islamic terrorist groups currently operating in Syria, Iraq, and the Middle East. Russia’s recent movement of air and ground assets into Syria, as well as its newly announced intelligence-sharing program with Iraq, Iran and Syria, serves as another stark reminder to members of both parties in Washington that Russia is a player that does not require our permission to act. At this point, the Obama administration has no alternative but to engage in deconfliction talks with Putin about airstrikes and military operations on the ground in Syria. Better still would be exploring the possibility of coordinating or even cooperating in the campaign against ISIS as part of a larger effort to negotiate a political settlement that would set the stage for a post-Assad regime.

Most Republicans running to be their party’s nominee in next year’s presidential campaign, as well as many in the Obama administration, find the idea of trying to work with Putin appalling. In their view, the Russian leader is inherently hostile toward the West, and only interested in acting as a spoiler on the world stage.  But there is reason to believe President Obama does not entirely share that view. In announcing that the nuclear deal with Iran had been concluded, Obama went out of his way to give Putin a shoutout, noting that “Russia was a help on this…and we would have not achieved this agreement had it not been for Russia’s willingness to stick with us and the other P5-Plus members in insisting on a strong deal.”

If the president were to ask “What Would Kissinger Do?”  and then follow America’s greatest living statesman’s advice, my bet is that he will find Putin ready to play a more constructive role than most of official Washington could imagine.