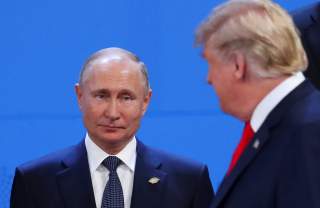 If Europe fragments, Russia will likely seek to enhance its influence in the eastern part. Whether that poses a threat to the United States will depend on the ability of Germany, France, and Great Britain to resist Russia’s advance alone or collectively. It these countries can mount a credible resistance, the situation will resemble nineteenth century Europe. The United States will have no need to intervene, although it will monitor the situation closely. One development it will want to impede in particular is a German-Russian rapprochement that would create an entity capable of dominating Europe to America’s detriment, while helping Russia counterbalance the rise of China. If on the other hand the big European powers prove incapable of resisting Russia’s advance, the United States will probably have to play an active role in containing Russian influence on the continent, as it does today.

After Europe comes the Middle East. Its strategic importance for the United States, as noted earlier, will likely diminish over time. For Russia, however, the region will remain of high strategic importance because of the threat extremist forces in the region pose to Russia itself through the radicalization of its Muslim population and because the region’s energy exporters are direct competitors for lucrative markets in Eastern Europe. Despite the different strategic priorities, both the United States and Russia will have an interest in stability in the Middle East, the United States to ensure the reliability of energy supplies for global markets; Russia to contain extremist forces. For that reason, both countries will favor the formation of a stable equilibrium among the major regional powers, including Egypt, Iran, Israel, Saudi Arabia, and Turkey. But they will support the equilibrium for different reasons: The United States to prevent the emergence of a regional hegemon that could control the flow of energy resources out of the region; Russia to reduce the risk of widespread conflict and instability. Consequently, the two countries will have a common strategic goal in the Middle East, but they might find themselves competing for influence with the regional powers as they seek to support a stable equilibrium.

Finally, as the ice cap melts, the Arctic will rise in strategic importance for both countries. They will both have an interest in developing its abundant resources, and Russia will have a direct interest in the opening up of the potentially lucrative Northern Sea Route. Given that the vast share of the known resources are located within the boundaries of the well-defined economic zones of the five Arctic littoral states (Canada, Denmark, Norway, Russia, and the United States), there should be little reason for sharp competition for those resources. Rather, the harshness of the climate should encourage the formation of multinational consortia to develop them. As a result, the Arctic has good chances of remaining a zone of strategic cooperation.

World Order: There will continue to be tension between the U.S. support for a rules-based order and Russia’s desire for a concert of great powers that works on the basis of understandings. But a multipolar world, particularly one consisting of powers grounded in different value systems, will inevitably erode a rules-based order because there will be no widely accepted authority capable of reliably adjudicating disputes and enforcing the rules. In these circumstances, global order will grow out of understandings among the most powerful countries, which may or may not be formulated in the guise of rules, sustained by a balance of power. Such an arrangement does not preclude the emergence regional subsystems, some of which might operate as rules-based orders, as the Transatlantic Community has since the Second World War. Nevertheless, the overarching global order as a whole would shift toward Russia’s preferred construct.

Values: History and tradition suggest that there will continue to be a values gap between Russia and the United States. Although a democratic breakthrough is unlikely, a liberalizing trend could emerge in Russia that would perhaps ease the tension, but not eliminate it entirely. Russia, for its part, is prepared to allow different systems of values to coexist.  The question is whether the same is true for the United States, but it is possible that the United States will revert to the position it held before the First World War, whereby the United States supported the spread of democracy but was ultimately prepared to defend only its own.  Such a policy would diminish tensions with Russia.

A Matter of Choice

Although U.S.-Russian relations today verge on a confrontation that has not been seen since the early 1980s and competition has been the norm for the greater part of the past 150 years, global developments during the next three decades could slowly erode the historical foundations of the competitive relationship and create opportunities for strategic cooperation. In particular, the emergence of a genuinely multipolar world could ease the tensions that have long existed between the United States and Russia over issues of world order. By moderating the claims of American exceptionalism and diminishing the role of rules in regulating international behavior, it would encourage the emergence of a concert of great powers and the coexistence of different value systems as the way of creating order and fostering peace. The United States could still seek to established rules-based subsystems where its authority predominated, and it would, consistent with its traditions, still advocate for the advance of democracy, but a space would be carved out for Russia where it could feel psychologically secure from American activism. Such conditions would make it easier to cooperate on geopolitical matters.

Indeed, some U.S.-Russian geopolitical cooperation would be needed to maintain a balance of power, the prerequisite for order and stability in a multipolar world. Such cooperation would be needed to forge a regional balance in Asia, as China’s power accumulates. The two countries could find themselves in a similar situation in the Euro-Atlantic region, should a more or less unified Europe slowly emerge in coming decades. And should Europe eventually fragment into nation-states, the United States, as the off-shore balancer, would likely keep open the option of cooperating with Russia to maintain the balance (much as Great Britain did in the nineteenth century). In the Middle East, the United States and Russia could work together in maintaining a regional balance that would serve both their interests. Last, the two countries would be compelled to work together, along with other major powers, to create and sustain strategic stability. The multipolar nature of the strategic equation should diminish the tension that has accompanied U.S.-Russian efforts to maintain stability in the bipolar context that has so far prevailed in the strategic realm.

Such cooperative undertakings would represent a marked change from the current situation. But U.S.-Russian relations would still fall far short of the strategic partnership to which the two counties once aspired. Competition would still claim a large share of each country’s attention and resources.

Where will the balance be drawn between the inevitable competition and possible cooperation? In the end, that is a matter of political choice. Competition requires little imagination from leaders for it is just a continuation of the present course. Their task is managing the competition

responsibly to reduce the risk of a violent confrontation neither side wants. In this sense, continued competition is the easy choice. Shifting the balance toward cooperation requires much more effort, and bears greater political risk, because it entails overcoming the deep estrangement and mistrust that prevails today. To move in this direction, leaders would need to see clearly the critical global trends and the implications for their countries, as well as the possibilities of cooperation. It would require them to elaborate a new vision for U.S.-Russian relations and then to persuade today’s skeptical publics and elites of its viability. Today leaders with such a talent are lacking; consequently, strategic competition will continue to define U.S.-Russian relations. Whether leaders with the requisite imagination will emerge in the future remains to be seen.

Thomas Graham, managing director of Kissinger Associates, was the senior director for Russia on the U.S. National Security Council staff 2004–2007.