U.S. Should Be Appalled by Japan's Historical Revisionism 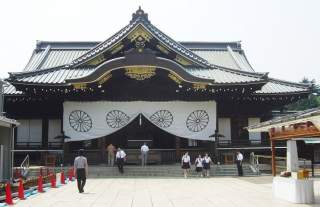 As the New York Times reported at the time, in the speech Mr. Abe vowed “to step up efforts to fight what he called mistaken views abroad concerning Japan’s wartime actions.”

The prime minister was referring specifically to references to Comfort Women in a McGraw Hill-published textbook used in some California high schools. However, while Japan’s historic revisionism may begin with the Comfort Women and the Nanking Massacre, it ends with President Truman and the atomic bomb. If Japan is the victim in the Pacific War, Tokyo would have it, then America must be the aggressor and Harry Truman, not Hideki Tojo, the war criminal.

Those who argue that the United States should have little interest in the current debate raging over the historic legacy of the Second World War in Asia need to think again. First and foremost, the Pacific War, which ended 70 years ago this coming summer, was very much America’s war too.

While the Second World War had raging in both Asia and Europe for years, it began for the United States on December 7, 1941 when Japan attacked Pearl Harbor. Following the surprise attack, America declared war on Imperial Japan, NOT Nazi Germany or Fascist Italy. The recent movie “Unbroken” is a chilling reminder of what that declaration of war meant for America’s Greatest Generation.

(Recommended: Sorry, China: Japan Has the Better Claim over the Senkakus)

Tokyo’s revisionist logic is centered on the premise of Japan being victimized by the Allied powers, most notably in the fire bombings of Tokyo and the devastating atomic bombings of the of Hiroshima and Nagasaki, which resulted in thousands of civilian casualties.

This revisionist narrative is laid out in detail at the Yushukan museum in Tokyo next to the Yasukuni war shrine. The logic is as follows: Imperial Japan waged the Great East Asia War (Daitowa Senso) in an effort to liberate the Asian peoples from the yoke of Western Imperialism. The “selfless goal” was to bring the enlightened modernization of Meiji Japan to hopelessly backward Asian brothers and sisters.

The Yushukan museum claims that U.S. President Franklin Roosevelt sought to halt this crusade of “Asia for Asians” by imposing an oil embargo that aimed to cripple Tokyo’s war-making capacity. According to the narrative, then, Japan had no choice but to respond to Roosevelt’s interference by attacking the U.S. Pacific fleet at Pearl Harbor.

The unprovoked attack on Pearl Harbor was the greatest such attack on American soil before 9/11. Notably, the Pearl Harbor attack also had civilian casualties, including a seven month-old infant.

In truth, Pearl Harbor likely had more to do with Japan signing the Tripartite Pact with Nazi Germany and Fascist Italy in Berlin on September 27, 1940 than with FDR’s oil embargo. Even the bravado of Japanese militarists would likely have been tempered by the sobering thought of taking on the industrial might of the United States all alone.

When the decision to attack Pearl Harbor was reached in the fall of 1941, Nazi troops were engaged in a full-scale invasion of the Soviet Union. It looked as though the Allies would be preoccupied with stopping the Nazi blitzkrieg, leaving Tokyo a free hand in Asia. Hitler’s troops reached the outskirts of Moscow before a Soviet counterattack on December 5, 1941 – a mere forty-eight hours before Pearl Harbor. As Japanese bombs fell in the Pacific, the Red Army and a ferocious Russian winter combined to begin to turn the tide against Hitler in Europe. Still, Hitler and Mussolini, foolishly in retrospect, honored their treaty commitment to Tokyo by declaring war on the United States in response to Congress declaring war on Japan.

Unlike in Europe, history revisionists in Tokyo are not limited to isolated neo-Nazis and skinheads. Rather they include respected figures in Japanese society, including politicians and journalists. The crimes committed during the Pacific War which these Japanese opinion leaders now deny are critical to the judgment of history. While the overwhelming majority of the victims in the Nanking massacre, the Sook Ching massacre in Singapore, the sacking of Manila, Tokyo’s slave labor system, Unit 731’s bio-chemical experiments in Manchuria, and the Comfort Women stations, were Asians, rather than Americans or Europeans, these atrocities join other Axis war crimes and crimes against humanity as a major rationale for post-war international tribunals, including Nuremberg.

(The torture of POW slave laborers, as chronicled in “Unbroken,” along with the Bataan Death March and Siam-Burma Railway laborer abuse, was directed primarily against Caucasians and African-Americans. One sobering statistic: “Overall, an estimated 40 percent of U.S. Army and Air Force POWs died while in Japanese captivity, compared to 1.2 percent in German and Italian custody.” The bushido militarist culture in Imperial Japan preached that any soldier who surrendered rather than dying in battle was below contempt.)

The continued validation of crimes committed by Imperial Japan during the war, thus, remains essential if the Allied narrative of repelling a war of aggression is to prevail. The structure of the United Nations itself, whose five permanent Security Council members are WWII’s victorious powers, is premised upon this. Remaining silent in the face of Japanese denials of Comfort Women or the Nanking Massacre could ultimately undermine the whole rationale for the post-war international system.

The International Military Tribunal for the Far East (IMTFE) was convened in Tokyo to try Japanese leaders— including Hideki Tojo, architect of the Pearl Harbor attack— as war criminals. The IMTFE, however, is widely dismissed in Japan as “victor’s justice.” Many argue that those who were tried were only performing their patriotic duty to the Emperor, whose role in the war was never officially examined. Many also contend that the Allies sitting in judgment had committed far greater war crimes on a helpless Japan, including, as noted previously, the firebombing of Tokyo and the dropping of the atom bombs.

In his excellent book, Wages of Guilt: Memories of War in Germany and Japan, Ian Buruma points out that when the United Nations convened a Conference on Disarmament in Hiroshima in July 1992, “all went well” until an American Harvard professor spoke. Buruma records how the professor presented the Greatest Generation’s explanation for the atomic bombing by stating that “it ended World War II and saved a million Japanese lives.” Buruma records that the professor’s statements caused “outrage” among the Japanese public and that the Asahi Shimbun opined that unless the United States “disentangled itself from this kind of view” it would face opposition from non-nuclear countries.

Yet without this explanation, the use of atomic bombs on two cities filled with civilians is horrific and unjustifiable. War correspondent John Hersey’s compelling book Hiroshima, written in the immediate aftermath of the attack, with its graphic description of melted eyeballs and the shadow of a vaporized victim burned into a tile wall, would stir any person’s conscience. Japanese people cannot be criticized for reacting with horror, especially since their textbooks and educational system reportedly gloss over the war crimes Imperial Japan committed before the atomic bombings.

If the Nanking Massacre “never happened,” as NHK (Japan Broadcasting Corporation) Governor Naoki Hyakuta declared in February of last year, then there is no problem with going to Yasukuni Shrine to honor the spirit tablet of General Iwane Matsui, who commanded the Shanghai Expeditionary Force (SEF) in the assault on Nanking in 1937-38 and was sentenced to death by the IMTFE. However, if, as documented by the IMTFE, at least 200,000 Chinese soldiers and civilians were killed in the massacre, then honoring the memory of Matsui is the equivalent of honoring Adolf Eichmann, who was convicted of murdering 437,000 Hungarian Jews.

Both the Obama administration and Congress should be concerned that, by losing control of the World War II historic narrative, they could pave the way to the ultimate determination that President Harry S. Truman was the real war criminal in WWII. Without the crimes against peace chronicled by the IMTFE, there is little moral justification for the atomic bombings beyond the “they saved lives” narrative (which is largely dismissed in Japan).

One reportedly popular narrative in Japan is that Harry Truman and his advisors were white racists determined to use the ultimate weapon on an Asian people to demonstrate to the Soviet Union the horror of a nuclear holocaust. (This ignores the fact that the bomb was developed to be used against the Nazis, who were busy trying to perfect their own atomic weapon. The plan changed when Nazi Germany surrendered and Imperial Japan kept fighting.)

Those who advocate expressing remorse for the atomic bombings of Hiroshima and Nagasaki, such as Nancy Pelosi— who placed flowers at the Hiroshima bombing site when she was House Speaker in 2008— should be aware that such gestures will be misrepresented by the revisionist right in Japan to paint Truman as a war criminal.