U.S. Spymasters Swat Their Fly on the Wall 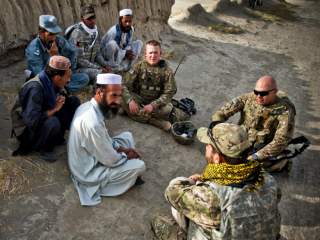 The U.S. Intelligence Community (IC) is the best in the world at determining what individuals are thinking. A global network of spies, phone intercepts and overhead imagery excels at analyzing persons. But it’s terrible at understanding people. This must change.

U.S. national-security priorities are increasingly focused, not on state actors, but on insurgencies, transnational terrorism and other forms of violent extremism. Defeating these groups means understanding and eliminating their popular support. But the IC has not changed much from the Cold War era in which it grew up. That does not have to be the case.

I had the privilege of leading the Consolidated Stability Operations Cell (CSOC), which managed atmospheric intelligence gathering for Coalition forces in Afghanistan. We developed a nationwide network that reported on what their communities were saying about development, governance, security and other pressing issues. The insights from our analysis were far more useful for Coalition resource allocation and international donors than tasked covert collection in Kabul.

How did we do it? Several hundred Afghans across the country reported on conversations they overheard during the course of their normal day. We instructed our Afghan network to report on passively gathered information, explaining that we had no interest in individuals’ identities. With CSOC’s large network, talented statisticians and analysts refined the data into atmospheric intelligence. For the first time, we had a meaningful measure of how Afghans felt about Afghanistan.

Unlike traditional intelligence collection, which focuses resources on the gaining access to information, CSOC served as the proverbial fly on the wall. Our focus was separating the signal from the noise. The talented CSOC team ran statistical analyses and tracked trends at quarterly and yearly intervals.

We saw how the presidential elections affected Afghans’ views on governance. We observed that a majority of Afghans prioritized increasing economic opportunities over improvements in security. We assessed areas that would become more or less sympathetic to the Taliban.

Moreover, unlike the IC's normal production of clandestine intelligence, CSOC’s information could be shared with a broad audience. Coalition forces in Afghanistan were voracious consumers of our reports. Away from the combat theater, U.S. government agencies (predominantly the Department of Defense and USAID) and special-operations forces leveraged our insights for their own missions. Perhaps most importantly, CSOC’s publications could be shared with foreign governments—which frequently requested briefings and roundtables to discuss our unique insights.

Paradoxically, it is this ease of sharing that probably contributed to CSOC’s death knell. The IC is uneasy with innovation. Intelligence is often defined by how hard it is to collect. Banners at the top of a page that read “TOP SECRET,” followed by a series of compartments, make readers feel as if they are being let in on a secret. “UNCLASSIFIED,” or “REL” (for releasable) to a series of countries, does not have the same effect.

As our security threats change, our static intelligence apparatus risks obsolescence. Yes, the United States will continue to be watchful of Moscow’s aggression in the former Soviet Union states, Beijing’s belligerence in the South China Sea and Pyongyang’s ballistic-missile threats. But what about local support for Ayatollah Khamenei, the Islamic State in Iraq and the Levant or Boko Haram?

We need to be better at understanding the population’s perspectives. Leveraging atmospheric intelligence helps commanders and policymakers identify regions that support militants and, more importantly, help them understand why. The often-used aphorism that “you can’t shoot an idea” continues to hold true. Kinetic actions are necessary, but insufficient. During the White House’s Summit on Countering Violent Extremism, President Obama emphasized the need to confront the societal, educational and political aspects that fuel radicalization. But one has to understand a problem in order to solve it.

Around the world, U.S. military campaigns are increasingly coupling with coalitions, not formal alliances. But intelligence sharing has to keep pace. Too many IC documents are marked “NOFORN”—no foreigner—indicating that they are only for U.S. consumption. Other publications are geared towards the Commonwealth or specific alliances—which leads to other members of the coalition not receiving critical information. (Classification guidelines require adhering to the most restrictive caveats, so including one “NOFORN” footnote makes the entire article U.S.-only.)

In addition to the IC’s reluctance to leverage atmospheric intelligence, the White House’s drawdown of 90 percent of servicemen in Afghanistan (from one hundred thousand to around ten thousand) limited CSOC’s ability to maintain a footprint in the country. Most CSOC analysts were located in-theater, to enable direct contact with our Afghan network and Coalition leadership. This hurdle could have been easily cleared, and I take responsibility for not finding alternatives for our operational support. Ultimately, it was the IC—not the military commanders, diplomats or policymakers—who decided to end the program.

The IC needs to try again. Programs like CSOC are invaluable to understanding what people want. Obviously, government and military leaders will make decisions based on a broad calculus, but atmospheric intelligence helps a soldier in knowing where to point a rifle, an aid worker in prioritizing an organization’s resources and a diplomat in negotiating with local officials. Without it, we are looking into a dark room with a penlight. It’s excellent for a pinpointed observations, but most of what is happening remains in the shadows.