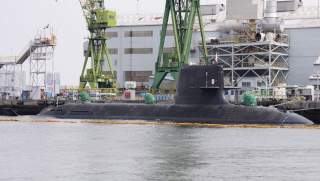 That's a 50 percent advantage numerical advantage for China—at a minimum. Again, allied submarines remain superior, boat for boat, but at some point brute numbers begin to tell. So the challenge before Washington is to add capable boats to its fleet on the cheap. (Tokyo could do its part by scrapping its self-imposed cap on defense spending and investing more generously in undersea warfare.) Here the figures are striking. The unit cost for the Soryu is estimated at $500 million, whereas each copy of the Virginia class comes in at a cool $2.8 billion. Do the math. It appears the U.S. Navy could afford five Soryus for the price of one Virginia, with change left over. That's bang for the buck.

Admittedly, the barriers to reentry into conventional submarine warfare would be formidable. For one, the ghost of Hyman Rickover would haunt any such debate. SSKs, unlike SSNs, command little obvious constituency within the submarine force, the navy, or Congress. Overcoming the all-nuclear mystique would demand concerted effort on the part of diesel proponents, perhaps with help from some truly dire budgetary pain. Such pain is more likely than not. In the 2020s, for instance, the navy will commence replacing its Ohio-class ballistic-missile submarines. Top navy leaders have warned that this project alone could drain shipbuilding coffers. Inexpensive non-nuclear alternatives may come to look palatable—if not downright appealing—under such fiscal circumstances.

Next, cultural proclivities aside, the nuclear navy would likely construe any move to acquire diesel boats as a threat to current SSN procurement plans. They might see an SSK program as a substitute for new Virginias, not as a complement to the nuclear-powered fleet. It would look like an attempt by cost-cutters to save money on the sly, at the expense of operational effectiveness. Defense manufacturers—particularly those specializing in naval nuclear propulsion—would add their voices to the din. And the outcry would be universal and twice as loud should Washington contemplate buying foreign—witness the uproar among Australian firms over Canberra's apparent decision to buy Soryus rather than replace its Collins-class SSKs with an indigenous make.

In short, the pushback from guardians of the status quo would be frightful to behold. This is a debate worth having nonetheless. Think about the upsides to diesel subs, even apart from their modest cost:

-     If indeed the Australian government proceeds with a purchase of ten Soryu-class boats to replace its underperforming Collins class, the Soryu could form the nucleus of a multinational East Asian submarine force spanning more than just the U.S. Navy and the JMSDF. Other partners could join in. Basing, maintaining, and employing a standardized fleet would be far easier than it is with the usual hodgepodge of ships built by many designers from many countries.

-     Multinational detachments could operate not just from Japan or Guam to the north but from the Philippines or Australia to the south. A standing allied presence along the first island chain would constitute a potent deterrent to Chinese mischief. So would an exterior position in Australia. Such a strategic position would grant diesel boats access to the South China Sea at many points along that expanse's permeable rim.

-     As World War II and the Cold War proved, proximity to patrol grounds magnifies the operational and strategic efficacy of undersea combat. Short transit times equates to more time on station and less wear-and-tear on people and hardware. Mounting patrols from homeports in the region thus boosts the number of hulls ready for sea when the balloon goes up.

-     Embracing a time-tested common platform would ease the interoperability problems that plague multinational ventures. Dissimilar gadgetry, tactics, techniques, and procedures, and national and service cultures throw sand in the gears of coalition operations, generating the "friction" that Carl von Clausewitz bewailed two centuries ago. The lubricant Clausewitz recommended was combat experience. Yes; and combat experience lubricates best when the warriors all carry the same arms. Never underestimate the power of standardized equipment—especially when a corps of experts, namely JMSDF submariners, already exists that can pass down knowledge and expertise to newcomers. U.S. submariners could ascend the diesel-boat learning curve swiftly, making themselves proficient in this new, old technology.

-     And lastly, a return to conventionally powered subs would confer side benefits within the U.S. Navy. Since the inception of atomic power, with its technical rigor and time-consuming training, it has become rare indeed for surface-ship sailors to cross over to serve in submarines, or vice versa. It's almost unheard of to do what, say, a guy named Chester Nimitz did: start off life as a submariner before going on to serve in cruisers. Reintroducing conventional subs could reintroduce the professional mobility of times gone by. Each community would profit from knowing the other's operating element firsthand. The navy as a whole would profit from collapsing some of the stovepipes—a.k.a. "cylinders of excellence"—that separate communities from one another to such baneful effect.

So let's open a new conversation within the naval community. And let's not accept "because...Rickover!!!" or kindred excuses for staying with current methods and hardware. If not diesel submarines, why not?

James Holmes is Professor of Strategy at the U.S. Naval War College and coauthor of  Red Star over the Pacific. The views voiced here are his alone.