U.S. Talks with North Korea Have Stalled—Now What? 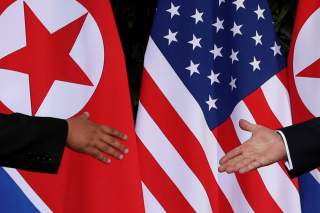 Last week, U.S. President Donald Trump prevented Secretary of State Mike Pompeo from visiting North Korea in September. This reflects the now-evident stalemate in the debate over North Korean denuclearization. The North Koreans want a formal peace treaty to end the still legally continuing Korean War. The United States does not think North Korean concessions to date have been significant enough to earn that. The process is now frozen as both side think the other needs to make a new concession.

This process began in earnest when Trump met North Korean leader Kim Jong-un at Singapore in June. We know now from reporting that Trump threw out all sorts of possible concessions to Kim in a seemingly desperate bid to get the North Koreans to move. In his press conference there, Trump talked of removing U.S. troops at some point from South Korea. He complained that the South Korean alliance was expensive, reflecting his broad belief that U.S. allies are free-riding on—“ripping off,” in Trump’s preferred locution—the United States. Trump cancelled this year’s Ulchi Freedom Guardian exercise—without so much as notifying U.S. Forces Korea or the South Korean government. And recently, we learned that Trump also floated a peace treaty.

A peace treaty is a central North Korea demand, because it implies the legitimacy of North Korea. State A signing a treaty with state B is implicitly recognizing that state B exists, is real, controls its people and territory substantially enough to be negotiated with, and so on. North Korea wants precisely that from the South, the United States and Japan. None recognize the North. All hope it will one day collapse, followed by unification on Southern terms. South Korea even enshrines this hope in its constitution, which defines the Republic of Korea as the sole legitimate state on the peninsula. A peace treaty would violate those hopes and aspirations. It would further the normalization of North Korea as a separate, distinct Korean state.

A peace treaty would also undercut the rationale for the United Nations’ presence in South Korea, and of USFK. If the Koreas are not at war anymore, and implicitly recognizing each other by cosigning a status quo-altering declaration, then why should the United States remain in the South? The left-wing coalition of the current South Korean president may not oppose that logic, but it is otherwise deeply suspect to centrist and conservative voters here. All of South Korea’s big newspapers oppose a rapid peace treaty which jeopardizes the U.S. tie to South Korea.

Precisely for this reason, no United States or South Korean president has ever assented to this. That Trump tossed this out rather nonchalantly has undercut Secretary of State Mike Pompeo’s efforts on denuclearization, because the North has now told him that it expects a peace treaty before denuclearization. Given that the treaty’s normalization benefits go to the North, hawks in the Trump administration, such as Secretary of Defense James Mattis and National Security Advisor John Bolton—have opposed it without greater, more strategic concessions. As Pompeo cannot deliver the treaty, the talks are now stalemated.

All this will become much worse later this year. This November, the Democrats are likely to take the House of Representatives in the U.S. midterm elections. It is widely expected that they will launch major investigations of the president’s behavior regarding Russia, and allegations of corruption and abuse of power. And at some point, Robert Mueller’s investigation of Trump and Russia will go public.

If enough dirt comes up, there may even be an impeachment effort against Trump. All of this will likely paralyze Trump’s administration over the next two years. Trump has struggled enough to pass major legislation. Big policy ideas like the Mexican border wall, an ObamaCare replacement, and an infrastructure overhaul have all stagnated. If next year sees a Watergate-style paralysis fall over Washington, which I believe is likely, North Korea will fall far down the list of Trump’s concerns. This year’s movement on denuclearization will be lost amid a tidal wave of media, investigations and scandal.

So what can be done in the remaining ten weeks, before Trump is wholly consumed by investigation?

North Korea has not made the necessary concessions to earn a peace treaty, given the treaty’s major ramifications for the U.S. position in Korea and normalization of North Korea. Trump should never have thrown this idea out there. The North has given us very little so far this year—three hostage releases, some unverified, uninspected build-downs at a few facilities, a test ban (when such tests are easily reversed and already prohibited by the UN), unverified Missing In Action returns, and family reunions. All of this is good, but small beer. None of it even approaches the kinds of political and strategic change that would justify a major change in United States and South Korean military posture.

The best chance now is for South Korean president Moon Jae-in to claw out a serious concession on nuclear missiles (or human rights) when he visits Pyongyang this month. At minimum, the United States and South Korea need a facilities and weapons list from the North of what they have so that we have a sense of what denuclearization might look like. Then we need to have a major debate over just what we want to give to the North in exchange for a portion of its missile and warhead inventory.

The North will never give up all its weapons. CVID (complete, verifiable, irreversible disarmament) was always wildly unrealistic. Instead, we need to think about what sort of sub-CVID solutions we can live with—North Korea retaining five ICBMs? Ten?—and what we will give them in exchange for these concessions. A peace treaty could be a part of that package, but it is worth far more than a test ban and some humanitarian gestures. Lesser concessions on our part might include sanctions-relief or aid.

The ideal way to pursue this would be stop searching for a massive, single-shot breakthrough and start working upward through small rounds of concession for counter-concession. That is normally how diplomacy works. Trump’s instinct, however, has been to reach for grand gestures that play well on T.V., but which then come apart later. That is what we are witnessing now. The strategic and ideological divides between the United States and North Korea are huge. South Korea can try to bridge that, but doing this all in one hurried summer was always wildly optimistic. And now with the U.S. campaign season upon us and investigations looming, the stalemate seems likely to continue, pushing the whole process back toward smaller steps.