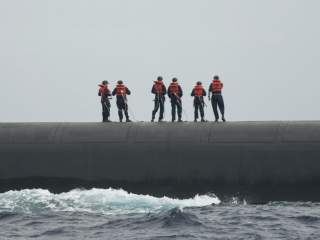 In a previous article, we examined the overall number of strategic nuclear warheads and carriers in the United States and Russia, including their compliance with the New Start Treaty. We also analyzed in detail the abilities of land-based intercontinental ballistic missiles (ICBMs) in the arsenals of both countries, and their prospects for development. Here, we will look at both countries’ submarine-launched ballistic missiles (SLBMs).

Let us briefly return to the Treaty for the Further Reduction of Strategic Offensive Arms (New START) and the second-to-last report on its performance, dated January 1, 2016 (the most recent one contains no data on the number of specific types of strategic carriers), prepared by the U.S. Department of State. According to the report, 236 of 762 deployed strategic carriers are Trident II SLBMs. Furthermore, they carry 1,012 (around 66 percent) of the 1,538 nuclear warheads available in the U.S. arsenal (according to data from April 1, the overall amount of warheads has reduced to 1,481, though it is difficult to tell which carriers caused the change). At the same time, Minuteman III land-based ICBMs carry 441 warheads (around 28.5 percent), while strategic bombers add up to eighty-five carriers with one warhead each (around 5.5 percent).

Now let us find out which percent of Russia’s warheads is carried by SLBMs. First of all, it should be noted that the existing data is somewhat less accurate, since there has been no detailed official report on the number of specific types of carriers and the number of warheads in recent years. Nevertheless, the existing unstructured data allows us to assess the situation accurately enough. According to this information, among 1,735 declared nuclear warheads, around nine hundred are located aboard 299 land-based ICBMs (approximately 52 percent), and around seven hundred of them on 160 SLBMs of various types (approximately 40 percent), while that there are around fifty combat strategic bombers (3 percent). The margin of error, revealing 5 percent of the weapons “missing,” indicates some inaccuracy in the existing information. But it does not change the situation significantly—the majority of Russian strategic forces are located on land-based ICBMs (what is more, the 5 percent error is apparently due to the new land-based ICBMs), while the overall situation is more balanced, with a very large SLBM share.

Now let us move from quantity to quality, and look at the parties’ SSBNs and their armament. We will also analyze the prospects of development of this field of nuclear deterrence forces.

Does the United States Own the “Perfect” Carrier?

The U.S. Navy uses only one type of strategic subsurface missile carrier: Ohio-class nuclear submarines. Currently, there are eighteen submarines of this class in service, though four of them have been redesigned into the carriers of Tomahawk cruise missiles, so they present no interest for us in this analysis. One Ohio missile SSBN is able to carry up to twenty-four Trident II SLBMs, which is a record—for example, Russian nuclear submarines of Project 941 Typhoon (there is one modernized sample redesigned into the carrier of new Bulava SLBMs left in service) and Project 955 Borei carry twenty and sixteen R-30 Bulava SLBMs, respectively, although their displacement significantly exceeds the parameters of their American rival.

Ohio-class submarines were produced between long-ago 1976 and 1997, and nevertheless maintain a very high ability, proving to be highly reliable machines: only one crew member death has ever taken place, and then only due to the violation of safety measures.

As for the Trident II SLBM itself, it has unique characteristics for a solid-fueled missile. Though the missile is not very new (it was put into service in 1990) compared to counterparts such as the Russian solid-fueled R-30 Bulava SLBM, it has a larger throw weight—2,800 kilograms, against 1,150—and a higher range capability, as well as world-beating precision: the circular error probable (CEP) of the warheads is only 90–120 meters, whereas the Bulava’s is 250–350 meters. Such precision allows the Trident II to be equipped with fourteen light W-76 warheads, each with a capacity of one hundred kilotons, since said precision ensures elimination of the opponent’s well-protected pits of land-based ICBMs. Besides, the missile has established yet another record: 134 successful launches in a row (with only four of 156 having been unsuccessful).

Today, an Ohio replacement program, also known as the SSBN(X) program, is being developed in view of the fact that the stock of Ohios in service will gradually start running out in 2027. By 2040, the last nuclear submarine of this type will have seen its expiration date.

According to the latest data available in the Congressional Research Service report dated March 31, 2016, the first SSBN(X) submarine should be laid down in 2021 and built by 2030. A total of twelve new-type submarines will be built, with the overall value of the program estimated at $95.8 billion.

The SSBN(X) design recalls the Ohio-class in many aspects, including its dimensions. However, there are also some serious differences: the new submarine will carry sixteen instead of twenty-four SLBMs, like its predecessor (the launching silos will be the same, designed to carry the Trident II missile). Moreover, the new nuclear reactor of the submarine will require no refueling during the life cycle (for Ohios, this process takes up to four years), while new systems will allow it to significantly reduce submarine noise.

As for the new SLBM, no thematic information is available on its development. It may resemble a modernized version of the most successful model, Trident II.

Russia’s Navy Was the First to Obtain Fourth-Generation SSBNs

Russia’s submarine forces have not yet reached the uniformity of the United States’. Currently, there are three 667BDR Kaľmar (Delta-III) submarines, with liquid-fueled R-29R (SS-N-18, NATO classification “Stingray”) SLBMs; six 667BDRM Dolphin (Delta IV) submarines, equipped with the most advanced liquid-fueled R-29RMU2.1 Liner and 29RMU2 Sineva (SS-N-23 Skiff under the NATO classification) SLBMs; and three new-generation Project 955 Borei submarines in service. The only Project 941 Typhoon submarine redesigned for tests with the new solid-fueled R-30 Bulava SLBM is in service as well.

As for the Project 667BDR submarines, their stock is near its end, and they will most probably be phased out in the early 2020s. Their R-29R SLBMs carry three warheads each, with a CEP of 900 meters—an unsatisfactory parameter for modern products. On the other hand, the Dolphin third-generation submarines will operate for a good while longer and, most likely, will exit service alongside their major opponent the Ohio class. They are equipped with liquid-fueled SLBMs, which surely have their disadvantages compared to solid-fueled ones (difficult and expensive maintenance, toxic and hazardous fuel, etc.), but their battle characteristics are still very good. The “freshest” SLBM modification, R-29RMU2.1 Liner, is capable of carrying four medium-capacity warheads with an anti-missile defense penetration system, or twelve low-capacity warheads to a distance of up to eleven thousand kilometers. The missile’s throw weight is identical to that of the Trident II, but its launch weight is ten tons lower. The submarine of this type has established the most important record—it remains the only strategic missile carrier in the world to shoot all its ammunition at one time (sixteen SLBMs). This happened in 1991, during an operation named Behemoth-2.

Now let us address Russia’s most advanced strategic subsurface missile carrier, the Project 955 Borei SSBN. This is the first fourth-generation submarine of its class. Currently, there are three Boreis in service; by 2021 they will already be eight, with the newest five built in a modernized variant, with lower noisiness. Another two to four submarines will likely be built later.

In general, the submarine concept is very similar to the promising American submarine SSBN(X). While they are similar in dimensions and displacement, both submarines carry sixteen solid-fueled SLBMs and have a significantly lower noisiness than third-generation submarines. However, unlike the SSBN(X), still available on paper only, the Borei is already in operational service.

As for the new solid-fueled R-30 Bulava SLBM, its creation progressed in a very difficult way. Eight of twenty-four launches appeared unsuccessful, but after a series of successful launches, the SLBM was put into service in 2013. At first sight, the Bulava’s characteristics are not very exciting—its throw weight is twice as low as that of R-29RMU2 and Trident II, while its CEP is estimated at 250–350 meters (there is no exhaustive information on this matter). The missile carries ten light warheads with a 150-kiloton capacity. However, it is known that the missile’s active trajectory leg is significantly shorter than that of its competitors (one of the anti-missile defense system penetration elements), while the flight trajectory itself is lower (the so-called low trajectory, which allows the missile to cover the distance to the target faster by reducing the opponent’s decision-making time). Thus, the missile creators explain the Bulava’s seemingly low characteristics by a large number of anti-missile defense penetration means featured in this SLBM.

The missile’s security issues should sooner or later be resolved. Another test is scheduled for June 2016, when a mass launch of two Bulavas will be performed.