The U.S. Withdrawal from Afghanistan Creates Uncertainty for Russia 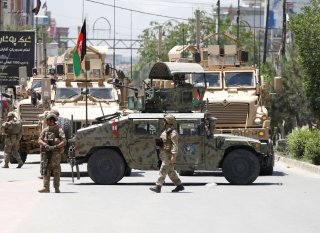 President Joe Biden's announcement that the U.S. military mission in Afghanistan will end on August 31 prompted mixed reactions in Washington, drawing open criticism from congressional Republicans and measured skepticism from some of his allies. Concerns linger that Kabul lacks the resources to stave off a Taliban resurgence in the country and that the withdrawal could bring a deluge of unintended consequences ranging from widespread ethnic cleansing to the potential destruction of Afghani statehood.

As America grapples with the implications of the withdrawal, similar discussions are taking place in Moscow — albeit with somewhat different framing. Russian political observers and Moscow elites did not miss their chance to underscore what they see as America’s failure in Afghanistan, with political commentator and prominent orientalist Yevgeny Satanovsky calling the withdrawal a “shameful flight.” Referring to the 1975 Saigon Embassy evacuations, Satanovsky added, “it’s not even that they fled in panic, as in South Vietnam, but they scrammed quietly, leaving everything to the whims of fate.”

Russian media seized on the accusations of Afghani officials that U.S. forces left the country’s Bagram Airfield in the dark of night without notifying the base’s new commander, who allegedly only learned of the departure more than two hours after the fact. Over the past week, Russia’s major media outlets constantly ran footage of munitions stockpiles, armored vehicles, and other equipment reportedly left in the wake of the U.S. military’s hasty retreat and subsequently looted by the Taliban. Russian commentators took the opportunity to draw what they see as a stark contrast between the Soviet and American experiences in Afghanistan. “When we left Afghanistan,” Senator Franz Klintsevich told the Russian newspaper Vzglyad, “the government that we supported in Kabul controlled most of the Republic’s territory. Soviet forces did not just conduct military operations, but also humanitarian projects — the rebuilding of bridges, roads, and de-mining of territories. All of this contributed to the peaceful development of Afghanistan.” Still, others painted the hastiness and alleged secrecy of the withdrawal as a warning to “would-be” American allies such as Georgia and Ukraine: “We [the Soviet occupying force] behaved [in Afghanistan] according to principles. What did the Americans do in Bagram? They left and abandoned their so-called allies to deal with the consequences,” said Russian columnist Maxim Yusin. “Could you imagine if we [Soviet forces] did that in 1988 when leaving the Bagram airbase,” he added.

But the vague sense of historical satisfaction over American failures in Afghanistan is quickly being overshadowed by more pressing geopolitical worries, keenly felt in the Kremlin and by Russian politicians. “Today the destabilization of post-Soviet regimes in Central Asia seems quite likely. It’s unclear how things will develop from here, how we will deal with the fact that the Taliban could win in Afghanistan and begin to expand and export Islamic extremism to adjacent states. That is a serious challenge for us,” Igor Korotchenko, a defense expert and member of the Defense Ministry's public advisory council, said.

The Taliban is designated by Russia as a terrorist group, but that has not stopped the Kremlin from engaging with the group in recent years. The fruits of those earlier labors were on full display this week when a Taliban delegation visited Moscow to discuss Afghanistan’s future. Russian Senator Vladimir Dzhabarov expressed hope for the normalization of Russian-Taliban relations: “we will interact with any legitimate government of Afghanistan. If the Taliban becomes the legitimate government — of course we will improve our relations, but only on the condition they are not hostile to our country.”

The Taliban delegation, for their part, went to great lengths to reassure the Kremlin that they harbor no hostile intentions toward Russia or Russia’s Central Asian allies.  The negotiators reportedly assured Moscow that they will not “attack the Tajik border,” adding that they will work to prevent the Islamic State of Iraq and the Levant (ISIL) from establishing a foothold on Afghan territory. Moscow remains committed to defending the territorial integrity of Tajikistan, which hosts a Russian military base and acts as a key buffer against inflows of militants from the broader Middle East into Central Asia and beyond. The Collective Security Treaty Organization (CSTO), a six-member Eurasian military alliance headed by Russia, said on Thursday that it will marshal all the resources needed to defend the Tajik-Afghan border, following an earlier appeal for outside help by CSTO member state Tajikistan. Despite the military steps being taken to shore up the border, the Kremlin has been clear that there are no plans to deploy Russian forces in Afghanistan. “As for the continued military action in the absence of the political process, then the events on Afghanistan’s territory concern us exclusively from the point of view of a possible spillover of troubles onto the territory of our allies," said Russian Foreign Minister Sergey Lavrov. “The fact that the Talibs have occupied border posts on the border with Iran, on the border with Tajikistan… while this is happening on Afghanistan’s territory, we’re not going to undertake any measures except for our insistent calls for the political process, which all Afghans have said they support, to happen as soon as possible,” he added.

The Kremlin is reluctant to unilaterally extend full diplomatic recognition to the Taliban, but, as implied by Dzhabarov, the political and military calculus behind Russia’s current stance may change if the militant Islamist group emerges as the undisputed winner from its ongoing power struggle with Afghan government forces.