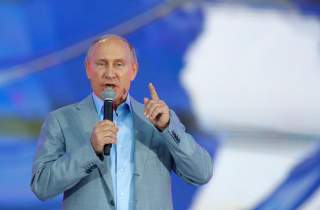 Last week’s fourteenth annual Valdai Club meeting in Sochi had the ambitious title “The World of the Future: Moving Through Conflict to Cooperation.” During its first few years, the Valdai Discussion Club—initially founded to provide foreign experts on Russia insights into Russian domestic and foreign policy—focused primarily on Russian developments. But, for the past few years discussion of Russian politics has been scant and the focus has been on global issues. This year, panels debated topics ranging from the conflict between rich and poor, between man and nature, and between “universalism” and “humanism,” to how prepared countries are for future challenges and the now-inevitable question “black swans.” There was only one panel on domestic politics, but the subject was not Russia. Instead, the topic focused on the United States, as in “America: What’s Next?” Myself and others were asked to discuss “the outcome of the political crisis in the United States.”

The highlight of the Valdai conferences is always Vladimir Putin’s speech. This year he was joined on the stage by former Afghan president Hamid Karzai and Chinese tech-super- entrepreneur Jack Ma, founder of the internet giant Alibaba. Putin, echoing themes that had already been raised at the meeting, focused on the heightened danger of war, particularly nuclear war. Arguing that Russia had fully complied with all the provisions of the arms-control agreements it has signed with the United States, he claimed that what he described as the U.S failure to fulfill its obligation under the 2000 Plutonium Management and Disposition Agreement was “perplexing and alarming.” While criticizing the North Korean nuclear weapons program, he called for dialogue.

Putin returned to one of his recurrent themes—that the West’s insistence on the recognition of Kosovo’s independence opened a Pandora’s Box of separatist movements. He went so far as to quote at length from the International Court of Justice’s 2010 decision upholding Kosovo’s right to secede from Serbia to justify subsequent separatist movements in the post-Soviet space. He blamed the EU and the United States for what happened in Ukraine, and blamed Kyiv for the failure to implement the Minsk agreement. He accused the United States of “massive support for separatism and radicalism in our North Caucasus.” And, when asked whether Russia itself had made any mistakes, he turned the question around and answered that Russia’s mistake was that it trusted the West too much, and the West’s mistake was that it took Russia’s trust as weakness and abused it.

Despite this by-now familiar litany of accusations against the United States, there was no criticism of President Trump. Indeed, President Putin went out of his way to say that Trump should be treated with respect as the legitimately elected leader of the United States and to blame Congress and the courts for obstructing his ability to implement his legislative agenda. He declared Russia’s readiness to cooperate with the United States when it was ready to do so, but only under conditions of mutual respect and full equality.

Criticism of the United States was repeated by several of the other speakers. A senior Russian official on the “America: What’s Next” panel argued that Russia’s difficulties with the United States began in 1994 with NATO expansion and categorically denied that Russia had interfered in the U.S. elections. He remarked that Americans claim that Russia does not understand the U.S. system, but that is not true. Russia, he claims, does understand the American system, but that does not help.

A senior official who discussed the Russian economy emphasized positive developments, such as rising GDP growth rates, increasing hard-currency reserves and less dependence on oil and gas revenues as a share of the budget. He claimed that Western sanctions had only cost Russia 1 percent of its GDP. Highlighting the turn to China and the growing economic importance of China for the Russian economy, he stressed the need to develop Russia’s Far East and tackle its acute demographic problems. Like others, he praised the recent turnover in regional governors that would rejuvenate the system.

This year marks the centenary of the Bolshevik Revolution, and official Russia has been in two minds about whether and how to commemorate it. After all, the Bolshevik Revolution was surely the mother of all “color” revolutions. Putin said that it had both positive and negative consequences. Some left-wing Russian participants complained that the revolution had not been adequately celebrated. The historians’ panel on the Russian revolution was one of the most interesting of the conference sessions. There was disagreement about why and how it had happened and what its consequences were. When the speakers became more personal and talked about their own families’ involvement in the revolution, the full complexity and tragedy of Russia’s history was on display. Their forbearers ranged from generals in the White Army, to peasant and worker revolutionaries, to Argentinian Jewish communists who traveled to Russia to join the revolution. The consensus? That it was perhaps too early to judge to full impact of the tumultuous events of a century ago.

The conference’s epitaph was provided by a senior Russian official: “We only look like Europeans, but we really are different.”

Angela Stent directs the Center for Eurasian, Russian and East European studies at Georgetown University and is the author of The Limits of Partnership: U.S-Russian Relations in the Twenty-First Century.

Image: Russian President Vladimir Putin addresses participants of the 19th World Festival of Youth and Students during the closing ceremony at the Olympic Park in Sochi, Russia October 21, 2017. REUTERS/Alexander Zemlianichenko/Pool