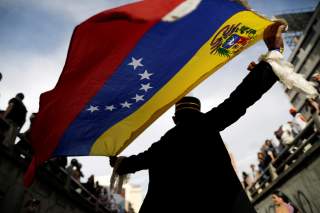 Last week, a number of left-wing activists occupied the Venezuelan embassy in Washington, DC, while Venezuelan-Americans counter-protested outside the building and demanded the end of socialism in the Latin American country. Today’s proponents of socialism often fault their critics for equating twenty-first-century “democratic socialism” with totalitarian versions of that philosophy, which dominated many countries in the twentieth century and continue to exist in places like Cuba and North Korea today.

But the comparison between old and contemporary kinds of socialism is still warranted.

First, democratic socialists too often slip into support for socialist dictatorships—the phenomenon extends beyond the Maduro fans at the Venezuelan embassy. Up until Venezuela’s collapse became undeniable, prominent socialists heaped praise on the country as an example of successful socialism. In 2011, U.S. Sen. Bernie Sanders touted on his official U.S. Senate website an article proclaiming, “These days, the American dream is more apt to be realized in … Venezuela … where incomes are actually more equal.” Sanders has also praised both Fidel Castro’s Cuba and the Soviet Union (where he honeymooned). The UK’s Labour Party leader Jeremy Corbyn has, on camera, called Chávez “an inspiration to all of us” for having allegedly, “showed us there is a different and a better way of doing things. It’s called socialism, it’s called social justice, and it’s something that Venezuela has made a big step toward.”

Mark Weisbrot of the left-leaning Center for Economic and Policy Research criticized warnings about Venezuela’s socialist path, writing in The Guardian in 2013, “Predicting a Venezuelan apocalypse won't make it happen.” Those words have aged badly.

Sympathy toward authoritarian socialism by some on the political Left is, sadly, nothing new. During the height of Stalinism, the Moscow correspondent for the New York Times (and Stalin admirer) Walter Duranty famously lied to hide the mass starvation in Ukraine and the extent of the dictator’s crimes, and was rewarded with a Pulitzer Prize.

As if socialists occasionally suffering from a blind spot for socialist despots weren’t enough, the second reason that the “old” socialism remains relevant is that the policy program of today’s socialists has not meaningfully evolved.

Today’s self-identifying socialists may no longer regularly speak of direct government ownership of the means of production (with occasional exceptions like analyst Matt Bruenig of the People's Policy Project), but the rhetorical shift of contemporary socialists masks support for what are, in effect, policies similar to those that existed in socialist countries in the twentieth century. Harvard University’s Jeffrey Miron and my colleague Ryan Bourne have noted that “the distinction between government ownership and financing will be illusory in practice.” When taxpayer dollars finance goods or services, private alternatives will struggle to compete with “free” ones, thus eroding market-based competition.

Rep. Alexandria Ocasio-Cortez’s proposed set of reforms, the “Green New Deal,” offers a wish list of socialist policies. Its demands for dramatic transport sector and infrastructure overhauls, a jobs guarantee that would make the government the largest employer, tighter labor market regulation, stronger labor unions, and restricted trade, all represent concrete steps away from market-led decisionmaking and towards centralized planning. Other policies popular among modern day socialists include “free” college (which will have to be covered through increased taxation), a higher minimum wage, distortionary tax rates on corporations and the rich, and converting shareholder firms into worker-owned cooperatives.

These policies would end up devastating the economy through a combination of enterprise-crippling regulation, elimination of market competition, and the removal of the price mechanism to match supply with demand and allocate resources efficiently. Like the so-called “market socialism” of the former Yugoslavia in decades past, the “democratic socialism” now enjoying popularity is simply an attempt at rebranding without new ideas or real improvement. Socialist policies inevitably do damage, even in the oft-vaunted Scandinavian countries, which achieved economic success before the rise of their welfare states. In Sweden, for example, out-of-control public spending led to the 1990 economic crisis and Sweden has since wisely reversed course somewhat. Norway and Denmark are both currently led by government coalitions favoring more free-market policies.

We should not ignore the lessons of twentieth-century socialism’s failures, nor turn a blind eye to what socialism has wrought in Venezuela—as some socialists, sadly, do. Until the socialist movement evolves different policies, these failures remain relevant. There is no reason to think that the same policies that failed in the past will produce different results in the future.

Chelsea Follett is a policy analyst at the Cato Institute.