Is Venezuela on the Brink of Economic and Social Collapse? 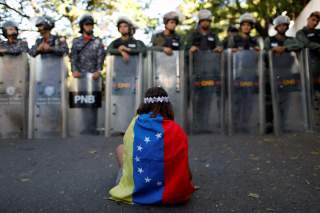 Venezuela is totally out of sync with most of Latin America and the Caribbean as it has headed in an increasingly autocratic direction politically, marked by stunningly inept economic mismanagement, reminiscent of Zimbabwe under Mugabe and the Congo under Mobuto. The problem is that as Venezuela sinks deeper into socioeconomic misery, many of its citizens are opting to leave. At the same time, the authoritarian regime continues to function as major conduit for illicit drugs in Latin America and the Caribbean, such is the need for cash among the Chavismo political elite. In a sense, the Venezuelan house is on fire and the neighbors are increasingly nervous of the spread of its problems into the region.

Venezuela is a mess. It clings on the edge of total debt default only thanks to the timely recent assistance of Russian money. At the same time, the economy has imploded—oil production and exports are struggling, inflation has zipped well above 2,000 percent (into the realm of hyperinflation), unemployment is in excess of 20 percent, and there are growing numbers of outbreaks of looting in the face of widespread shortages of food and basic goods. By one estimate, Venezuela’s economy has contracted by 40 percent in per capita terms from 2013 to 2017, while the country has one of the world's highest homicide rates.

President Nicolas Maduro survives by the graces of military support, Cuban advisers, a shrinking base of socialists and communist diehards in the Chavismo movement, help from criminal organizations, a base of voters dependent on food from the state, and external support from China and Russia. The regime is active in suppressing dissent, using institutions that have been coerced and, when necessary, willing to use lethal force as exemplified by the January killing of the charismatic rebel leader, Oscar Perez, a former police officer and movie actor. Last year more than one hundred people were killed in popular opposition to the regime. Maduro is also helped by an opposition that has been unable to unify on a lasting basis.

Venezuela’s next presidential election is supposed to be held in April. Maduro has “offered” to run again and is expected to win. The regime’s mantra is when the game looks competitive, change the rules. It did this when the opposition won control of the national legislative body in December 2015; in July 2017 the government held an election (not recognized by the opposition) for a newly created legislature, which was promptly packed with regime supporters. Voters will no doubt be reminded that it is the government that controls the distribution of food.

While Maduro continues to run the economy into the ground, the country is increasingly isolated. It has a tenuous relationship with its creditors, including the Chinese, who lent the regime around $50 billion and are not happy with Caracas’ slowness in meeting payment obligations (even in the form of oil shipments). Moreover, Venezuela is cut off from international capital markets. According to Moody’s, Venezuela owes $141 billion to bondholders, other nations and a long list of companies (including airlines, a number of which have stopped flying there).

The U.S. government has identified thirty Venezuelan officials (including the president and vice president) for criminal activities. The U.S. government also restricted the ability of the regime to borrow money from U.S. creditors. U.S. Treasury Secretary Steven Mnuchin stated that “Maduro may no longer take advantage of the American financial system to facilitate the wholesale looting of the Venezuelan economy at the expense of the Venezuelan people.”

Other countries have leveled sanctions against the regime’s leaders, including Canada, Colombia, the European Union and Mexico. Indeed, the EU in January sanctioned seven Venezuelan leaders for undermining democracy, which included a travel ban and asset freeze. The EU statement was based on “the non-respect of democratic principles or the rule of law as well as in violation of human rights.”

For change to occur it will have to come from within the ranks of the armed forces. While the top leadership has benefited from its close relationship with the Maduro gang, much of the rank and file is not immune to the ravages of socialist policymaking and mismanagement. There have been persistent reports of growing morale problems in the lower ranks. Maduro and his court must be giving considerable thought as to how political change came to Romania in 1989 and Libya in 2011.

As Venezuela limps into early 2018, it is increasingly isolated from a Latin America that is heading in a more market-friendly direction. That includes former allies, Argentina and Ecuador. Six presidential elections are scheduled for 2018—Brazil, Colombia, Costa Rica, Mexico and Paraguay—and none of them are likely to bring into office friendly governments willing to shield Maduro’s autocratic regime. The only friends left within the region are Cuba, Bolivia and Nicaragua, hardly shining examples of democratic governance and they are economically unable to help the regime. As the Venezuelan economy further melts down, more people from that country are going to flee to Colombia, Brazil and the Caribbean.

There have already been reports of boats with Venezuelans sinking and drowning, which gives the image that they could be Latin America’s newest round of “boat people,” fleeing horrible conditions at home. Venezuela’s growing destabilization is something that neighboring governments are watching closely. Colombia has had to deal with border closures and periodic threats. The Dutch islands, Aruba, Bonaire and Curacao, are also having problems, including reports of Venezuelans coming to the islands allegedly for nocturnal raids, people coming to buy goods unavailable at home and the Maduro government closing off all trade for a few days (which was done this January) to curb this popular outlet for its citizens desperate to buy consumer goods no longer available at home. Venezuelans are also crossing over into Trinidad and Tobago and heading up through the island chain, seeking escape.

Venezuela’s economic crisis is also hurting the Cuban economy, which had a special deal in receiving oil from its larger socialist ally. As Venezuela is struggling to export oil, it has stepped back from its Cuban obligations, which has forced the Castro regime to tighten its belt and seek greater help from Russia.

As Venezuela slowly hits bottom, it represents a risk to the countries in the region. The worst case scenario is that the country fragments into a number of political-military zones, much like Libya. The most likely scenario is that the regime is brought down by groups within the military that decide that enough is enough. However, the country is reverting to a barter economy and its population is more than restless. Many are without work, bored and increasingly hungry. The regime seeks to maintain its flow of goodies to its followers, but even many former supporters are frustrated and angry with the tragi-farce of the Maduro government. The clock is ticking to the end of the regime, which may not be as far away as many thought.