Venezuela Votes for Change After 16 Years of "Chavismo" 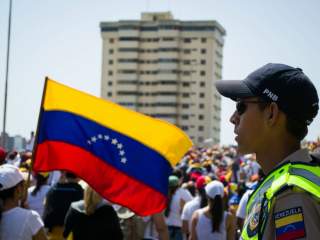 The December 6 election for the 167 seats in Venezuela’s National Assembly has come and gone. For the first time since 1999, the ruling left-wing coalition represented by the United Socialist Party of Venezuela (Partido Socialista Unido de Venezuela, or PSUV) lost. The opposition Democratic Unity Roundtable (Mesa de la Unidad Democrática, or MUD) won ninety-nine seats, to the PSUV’s forty-six. There are still twenty-two undecided seats, the result of close votes. With a voter turnout of 74 percent, it appears that the Venezuelan people have spoken and they want change.

Venezuela has entered a new political landscape. In the election’s aftermath, momentum is with the MUD, a broad left-right coalition that was formed in 2008. Although the MUD has managed to maintain unity in the face of considerable government heavy-handedness though several elections, success at the ballot box has eluded it until now.

What a difference an election makes. When the MUD enters the next legislation session, it is likely to attempt securing the release of political prisoners, a relaxation of press controls and an escape for Venezuela from the economic cul-de-sac where the late president Hugo Chávez and his hapless successor Nicolás Maduro have parked it. There is also talk about a recount of the contentious 2013 presidential election, in which Maduro squeaked home with a 50.8 percent majority.

Maduro’s presidency has been marked by economic near-collapse, a deterioration in personal safety—Venezuela ranks as one of the most deadly countries in the world in terms of violent crime—and a ready willingness of the president to blame every problem on a conspiracy of local capitalists and their allies, the United States and the European Union. The economy is in a second year of recession, driven by the drastic fall in oil prices—down over 50 percent since mid-2014. According to the International Monetary Fund, the Venezuelan economy contracted by 4.0 percent last year and is expected to shrink at an even steeper rate this year—and again in 2016.

Economic mismanagement has been evident in a widening fiscal deficit and questions over the government’s ability to repay its external debt obligations. At the same time, the state takeover of segments of the economy has led to major distribution problems, hitting everything from toilet paper and milk to condoms. Unemployment is over 10 percent and still climbing. Furthermore, the government’s policies have left the bolívar one of the weakest currencies in the Americas and helped stimulate inflation, which according to the IMF is expected to top 200 percent in 2016.

For most Venezuelans, the Maduro years have been a major disappointment. Lacking Chávez’s charisma and being unlucky enough to take office when oil prices collapsed, Maduro has compounded matters by his inability to assume any responsibility for the country’s problems as well as stirring up tensions with its neighbors, Colombia and Guyana. Add to this, the penetration of the drug trade into the government has only eroded the government’s legitimacy with the public. It is not difficult to see why the MUD was able to stage a landslide victory.

The main challenge in the short term is for the MUD to claim the majority of the disputed seats, which would give it a two-thirds supermajority (111 seats are needed). The MUD expects to gain at least thirteen additional seats out of the twenty-two seats that are disputed, which would give it the authority to remove Supreme Court judges, remove ministers and vice presidents, initiate a referendum to revoke Maduro’s electoral mandate from the 2013 election and rewrite the 1999 constitution. A simple majority would provide the MUD with the authority to vote down the government’s proposed legislation and limit the President’s travel.

While the 2015 legislative election was a major victory for the MUD, Maduro and the PSUV still control the presidency, courts and military. The PSUV also controls a majority of governorships and has made certain that the state-owned oil company, PDVSA, is packed with Chavista loyalists. This gives Maduro considerable leeway in regard to the disputed seats. He can cheat and disallow the MUD a supermajority, though he courts public demonstrations by doing so. At the same time, he could opt to replace the current legislative body with a Cuban-style election system, added to the constitution in 2010, which would create 18,000 “communes” to “exercise direct power.”

The Chavista government has changed the rules of the game before. In 2008, opposition candidate Antonio Ledezma won the election for the position of mayor of Caracas, an important and highly visible position in the country’s politics. In the election’s aftermath, the Chavista-controlled National Assembly voted to create a new capital district, whose head was then to be appointed by the President. Ledezma protested, but never served in the office to which he was elected.

Other options available to Chavista forces are to bribe or coerce newly elected MUD legislators to dilute the supermajority or move to arrest many MUD members on spurious charges. A more drastic option for the Chavista hardliners would be to remove Maduro, the source of popular discontent, either through a forced resignation or a coup, and then turn on the MUD via a state of emergency. For many Chavista hardliners, the fundamental ideas of the socialist revolution are still valid, but Maduro has failed in leading the movement.

Venezuela’s electoral outcome has an echo in the rest of Latin America. Under Chávez, Venezuela was able to project its influence throughout the region. But Chávez’s death, the downturn in oil prices, the related economic mismanagement and the penetration of Venezuela by drug cartels have diminished the country’s standing throughout the region. Much of the same process was evident in Argentina, where a corruption-prone left-wing administration was just voted out of office to be replaced by a more conservative government, and in Brazil, where the center-left government of President Dilma Rousseff is threatened with impeachment due to a brutal economic downturn and a major scandal involving the state-owned oil company.

Despite policies to reduce poverty (some of which have made headway), left-wing governments have proven to be just as prone to problems as many of the right-wing governments they replaced, including widespread corruption and erosion of human rights. Moreover, many of their economic policies, which rely heavily on state-based strategies, have not exactly left their countries in strong positions to weather the current downturn in global commodity prices and investment.

As for Venezuela, the country has moved into uncharted terrain. Beyond the issue of the twenty-two undecided seats, a major battleground could well be over the media. According to the human rights monitor Freedom House in its 2015 Freedom of the Press report, Venezuela’s media is “not free.” Indeed, the report noted: “Politicization of the press is an ongoing problem. Coverage in state-run media favors the president and his cabinet members, and public outlets adopt a clearly progovernment editorial line in news stories and opinion shows.” If the new National Assembly takes its seats, one of the first battles is likely to be over fairer coverage. For Maduro and the PSUV, loss of media control could take away a critical propaganda weapon, something not likely to be surrendered easily—if at all.

President Maduro’s term of office ends in 2019. The president will be lucky to see the end of his term. He faces some very difficult challenges, including how to deal with a reinvigorated opposition that has gained control of one branch of the government, a serious erosion in the public trust of his government and an economy set to deteriorate further. For the MUD, the political landscape is also daunting, but they have something they have lacked until now: a major electoral victory, and momentum. The task ahead is to maintain that momentum, something that the MUD will need if they want to put Venezuela back on track.

Scott B. MacDonald is a senior managing director at KWR International and the co-author of State Capitalism's Uncertain Future (Praeger 2015).