Venezuela's Elections: Why America Should Support the Opposition 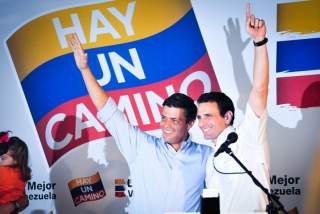 Sometimes we think a situation is so bad, it can’t get any worse. Then life proves us wrong. That’s the case with Venezuela today, where strongman Nicolas Maduro, the successor to Hugo Chavez, leads his people even deeper into the abyss.

Venezuela’s political and economic crisis continues to worsen. Hyperinflation and skyrocketing unemployment make life increasingly difficult for the average Venezuelan. And soon we will witness a miscarriage of justice by Mr. Maduro that will further estrange Venezuela from the norms of international behavior: the conviction and sentencing of Leopoldo Lopez.

The leading voice of the Venezuelan opposition, Lopez has been jailed since February 2014 on trumped-up charges of conspiracy and inciting violence against the government. On July 31 of this year, he and his defense team were advised that the government-sponsored prosecution had successfully “proved” the charges against him. His near-certain conviction will likely carry a sentence as long as twelve years.

The illegal conviction is but the latest in a long string of “blame game” steps taken by Mr. Maduro to explain away his total incompetence at governance.

Mr. Maduro’s style of governance exhibits all the bad traits of his predecessor, with none of the charismatic personality that Mr. Chavez enjoyed. This has resulted in an approval rating below 25 percent. Yet the former bus driver and union leader has a penchant for blaming others for his incompetency.

To justify his iron-fisted rule, Mr. Maduro cites “threats” against him and Venezuela’s national patrimony. These threats, he claims, emanate from the United States in general and from the “rightwing extremists” in Venezuela and Colombia. So great are these threats, he insists, that he has no alternative but to rule by decree and disregard political transparency.

He recently issued a decree declaring a “state of emergency” in Venezuela’s Tachira state: the Colombian “threat,” it seems, necessitated closing the border. This fear-mongering has now created a humanitarian crisis on the Venezuelan-Colombian border. An estimated 10,000 Colombians—some of whom had legal refugee status in Venezuela—have now been displaced.

What can Washington do to counteract Mr. Maduro’s uncivilized behavior?

First, lawmakers should join in a forceful, bipartisan condemnation of the regime’s railroading of Mr. Lopez. They should call out Mr. Maduro by name for his complicit role in this miscarriage of justice. Alongside of that condemnation, the Obama administration should rally similar voices of condemnation among the members of the Organization of American States. Our Latin American partners should willingly denounce the deepening deplorable state of human rights in Venezuela.

Secondly, the United States should unabashedly and unapologetically stand with the democratic opposition to Mr. Maduro in the run up to Venezuela’s December 6 legislative elections. International watchdogs should be called to witness the electoral process—including the chain of custody of the ballots and ballot counting—and validate the results. At present, Maduro is severely restricting electoral oversight. Not even the Carter Center is allowed to be present, and the international media will be constrained.

Finally, the Obama administration should end all high-level diplomatic engagements with Venezuela. Not only does that engagement appear to be a fool’s errand in terms of getting the Maduro regime to moderate its behavior, but it appears to reward intolerably bad behavior, sending a most disconcerting signal to the freedom-loving opposition.

A nation of nearly 30 million long-suffering citizens, Venezuela continues to sink deeper and deeper into political and economic despair under Maduro. And current American policy has left the democratic opposition confused.

It is time to reverse course and stand with those who will help bring Venezuela back from the abyss. The eventual recovery from the debacle of the Chavez-Maduro era will be sufficiently painful without having to explain why the United States chose to dance with the fiddler while watching his country go down in flames.

David R. Shedd, a former acting director of the Defense Intelligence Agency, is a visiting distinguished fellow in The Heritage Foundation’s Davis Institute for National Security and Foreign Policy.