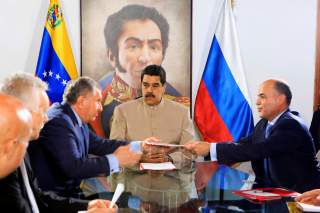 Petroleos de Venezuela (PDVSA) is indicative of the state of Venezuela. The once thriving company, which is responsible for exploration of the world’s largest proven reserves of oil and gas, is on the brink of collapse. Maj. Gen. Manuel Quevedo—a loyal follower of President Maduro who has no known energy sector experience—is now leading the company. Critics are viewing it as a safeguard against a military coup for Maduro who gutted PDVSA of top talent through arrests and firings as he tightens his grip on power. Before the purge, oil facilities were and still are crumbling, production has plummeted and Venezuela owes billions to Russia and China, which has South America and the United States concerned about geopolitical stability in the region.

The failures at PDVSA and the Maduro administration are a symptom and cause of the nation’s economic spiral, since Venezuela relies overwhelmingly on oil and gas sales for their economic well-being. Energy prices are now in recovery from the 2014 oil crash, but Venezuela is getting worse. With deepening troubles at PDVSA the nation is destabilizing rapidly and now, “The government is facing a dire recession, soaring inflation and unbridled crime, as well as food and medicine shortages.”

A decade ago, Venezuela was the richest country in South America and aspired to be the nexus of a diplomatic and trade alliance in the entire Western hemisphere. But now isolated, broke, and with Maduro regarded as a left-leaning despot in a region that has “shifted politically to the right,” Venezuela is looking to China and Russia for assistance. Beijing and Moscow have sought for decades to assert greater influence in America’s backyard—Maduro and his broken country have given them the perfect opening.

The rift with the United States worsened when Todd D. Robinson, a career Foreign Service Officer who was recently ambassador to Guatemala and is now the ambassador to Venezuela, said in an introductory video posted online, “that he would look for opportunities to help bring democracy and prosperity to Venezuela.” This was seen as American heavy-handedness by Delcy Rodriguez, President of Venezuela’s National Constituent Assembly who rebuked Ambassador Robinson by saying, “he had arrived to our country on the wrong foot.”

There are dangers to country’s meddling in Venezuela’s inner workings. Juan Gonzales, former White House and State Department official in the Obama administration who worked on Latin American policy said that, “Marginalizing the Venezuelan kleptocracy is important, but total isolation will cede the ability of regional leaders to shape political events on the ground to actors outside the region.”

This isolation by South America neighbors and Western hemisphere countries has consequences. According to statistics by the National Assembly, inflation in November was up 57 percent—anything above 50 percent is considered hyperinflation. Undeniable shortages of food, cash and public services has driven emigration, robbing the country of valuable citizens. As a result, Venezuelans are now literally starving. So the question is engagement or marginalization; but this third option of allowing China and Russia greater economic and diplomatic access seems to be winning.

As diplomatic affairs have turned sour in the region, Maduro is making increased overtures to Russia and China. Maduro visited Russia in October and thanked President Vladimir Putin for, “all the support, political and diplomatic, in difficult times which we are living through.” This gesture to Putin landed Maduro a lifeline by “restructuring $3.1 billion in debt.” In early December Maduro then met with Igor I. Sechin, chief executive officer of Rosneft, and negotiated the right to new ventures and two offshore gas fields in Venezuela.

Historically, China has taken a longer-term view on countries like Venezuela that are rich in natural resources. China is the world’s largest energy consumer and Venezuela will continue to be seen as a national and geopolitical priority for them to secure additional oil and natural gas. They will see their investments in Venezuela as risky but have a higher tolerance for the opportunity and vulnerability to manipulate Maduro, his government and country’s resources to their advantage. This is the perfect opportunity to lend billions, which China has done. As PDVSA falls behind on debt payments, Beijing is then able to scoop up precious Venezuelan energy and land assets for pennies on the dollar. It’s a perfect storm of opportunity for China and Russia to gain geopolitical influence over America, Canada, Central America and Mexico.

Russia and China have played the biggest role keeping Maduro’s crumbling regime afloat. In mid September, Evan Ellis, senior associate at the Center for Strategic International Studies and professor at the U.S. Army War College, appeared for a hearing before the US Congress’ Western Hemisphere subcommittee of the Foreign Affairs Committee and emphasized:

How Russia and China, in pursuit of their commercial and strategic interests in Venezuela, have provided capital, goods, services, and political backing that has indirectly enabled the populist regime to ignore and ultimately destroy the mechanisms of democratic accountability.

The downfall of Venezuela and the empty shell that is now PDVSA will have rippling geopolitical consequences that will be felt in Washington, Caracas, Moscow and Beijing. Since energy is the driving force of modern societies, expect Russia and China’s grip on Venezuela to tighten. What the Western hemisphere and South American nations in particular do to counter their moves are unclear at this time and anyone’s guess leading into 2018.