Venezuela's President Is Out of Control 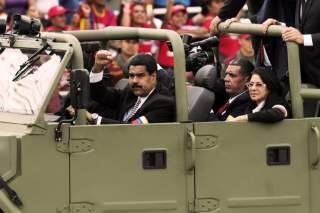 Venezuelan president Nicolas Maduro’s recent orders to arrest Caracas Mayor Antonio Ledezma, numerous opposition leaders and senior Venezuelan Air Force officers have pushed his country to the brink. The crisis illustrates not only the paranoia of a collapsing Venezuelan regime, but also the divergence between two blocs in Latin America—one set of countries following the failed, kleptocratic regimes left behind by “Chavismo” and another set pursuing liberal democracy, open markets and equitable development.

However, as the bloc of socialist nations—Venezuela being the most egregious example—has continued to backslide, the silence from those countries’ neighbors has been deafening. While the United States can and should continue to act as a strong advocate for democracy and the rule of law in the region, it is much more important for those Latin American nations that believe in these values to speak up and call out the abusive and authoritarian actions of their neighbors.

When Ledezma was hauled away by President Maduro’s henchmen, it was on trumped-up charges of “an American-led coup.” However, at this point, Venezuela’s desperate attempts to blame its shortcomings on the United States ring hollow. Blessed with oil, minerals and an educated population, the Maduro regime has continued to rob the Venezuelan people of their natural bounty. As a result, not only is the nation nearing bankruptcy, but those not connected to the regime are also deprived of the most basic staples.

Due to these failed policies, President Maduro’s popularity has fallen precipitously—down to around 20 percent—and the opposition stands to gain in December’s legislative elections. Rather than face the reality of the social and economic failure of Chavismo socialism, the Maduro government has turned to military and militia forces (including Cuban Las Avispas Negras special forces trained in counterintelligence and urban warfare), intelligence services and Soviet-style surveillance—all bolstered by a politicized judiciary—to suppress all opposition.

While the abduction of Mayor Ledezma is the most recent and visible example of repression, opposition leader Leopoldo Lopez remains held incommunicado on charges of treason, without trial, for over one year. Currently, it is estimated that there are over 6,000 political prisoners in Venezuelan jails and detention facilities, and of the seventy-six opposition mayors in Venezuela, thirty-three are currently facing some kind of criminal charge or trial.

On the other hand, the actions of the countries of the Pacific Alliance—Mexico, Colombia, Peru and Chile—present a welcome contrast, having left behind the tired clichés of Cold War socialism to chart a new course for Latin American countries.

The Pacific Alliance nations are at the forefront of a group of nations that have chosen a new path, one that supports the rule of law, commercial enterprise and free trade and will hopefully create a new regional integration based on these principles. They are building a middle class and broader-based economy than has yet been seen in Latin America.

Unfortunately, criticism of the actions of the Venezuelan government by those closest to the scene has been one of unseemly silence. While Colombian president Manuel Santos has called for the Organization of American States (OAS) to investigate the Venezuelan crackdown and the incarceration of Leopoldo Lopez, other key regional partners have done little—as institutions like the OAS have faltered, there is no better censure of Venezuela’s actions than that which comes from its neighbors.

(Recommended: Enrique Peña Nieto: The Most Interesting Man in the World)

Mexico, despite its current crises, still has a role to play as a regional leader and bridge between the North and South. Panama—currently a candidate for full membership in the Pacific Alliance—plays a significant role in the region’s finance and trade, and could serve as a significant voice against authoritarianism. Additionally, given its own experience with authoritarianism and peaceful democratic reform, Chile’s voice in these matters is vital. Finally, despite their own internal challenges with corruption, the Brazilian leadership could bolster their own reformist bona fides—and further legitimize Brazil as a global leader—by speaking out against what is happening in Venezuela.

At a time when Central and South American countries are seeking further regional integration and freer trade with the rest of the world, there needs to be a greater willingness to confront nations that undermine democratic institutions, free expression and the rule of law.

If Venezuela faces further economic and political collapse, it will be its neighbors that bear the brunt of the damage. Economically, there is already significant risk to the nations reliant on Petrocaribe, as Venezuela finds itself unable to fulfill its commitments. Further deterioration in these countries also raises the specter of increased narco-terrorist activity and other security challenges.

Ultimately, it is the leaders of these nations who will shape the region’s future. While their achievements in reform and regional integration have been praiseworthy, their voice is now greatly needed in confronting authoritarian abuses in their neighborhood.