The Victory of Jared Kushner 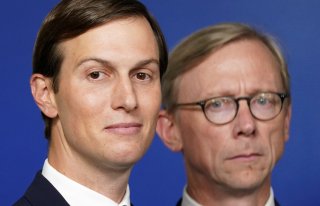 Israel and the United Arab Emirates have struck a historic deal to normalize relations—rewriting the political map of the Middle East. This is an unexpectedly positive move.

Known as the “Abraham Accord,” after the shared progenitor of Judaism, Christianity and Islam, the UAE-Israel agreement allows trade and investment to flow between the two regional economic giants and assures an exchange of ambassadors, embassies, tourists, pilgrims and investors. In exchange, Israel has agreed not to annex certain West Bank lands.

Together we can bring a wonderful future. It is an incomparably exciting moment,” Israeli Prime Minister Benjamin Netanyahu said. “I have the great privilege to make the third peace treaty between Israel and an Arab country, the UAE.”

Netanyahu wished Crown Prince of Abu Dhabi Mohamed bin Zayed “Salam Aleykum v’Shalom Aleynu—peace unto you and peace unto us.”

By choosing this path, “Bibi the strategic thinker” wins out over “Bibi the political tactician.”

President Donald Trump said in a statement that “opening direct ties between two of the Middle East’s most dynamic societies and advanced economies will transform the region by spurring economic growth, enhancing technological innovation, and forging closer people-to-people relations.”

In subsequent remarks in the Oval Office, Trump alluded to “many more countries” in the region normalizing ties with Israel, and “some very exciting things including, ultimately with the Palestinians.”

This is a landmark agreement that deserves a closer look.

First, no one believed that Jared Kushner’s innovative peace plans would bear any fruit. Now, Kushner’s peace plan seems to be working. What was once unthinkable is now a reality.

Second, it shows the power of the new rising generation, both in America and in the Middle East. Kushner did not approach the Middle East crisis through old memories and old wounds. He started fresh and asked an original question: What if we put economic growth ahead of drawing new borders between the Jews and the Palestinian Arabs? This question led him to an original idea. In the Arab world, a new generation is also coming of age. It is tired of its elders complaining about land lost in 1948; it wants homes, jobs, and schools now and of course security. The new Arab generation wants solutions for today’s pressing problems, not revenge for past perceived wrongs.

Third, it shifts Middle East politics from Palestine to Iran. Tehran’s proxy forces across the Middle East have long been feared to play a key role in any further escalation of tensions between the United States and Iran. The death of Maj. Gen. Qassim Suleimani increases the likelihood of Iran’s network of proxy forces posing a more direct threat to potential U.S. targets.

Trump’s Middle East adviser Brian Hook said the Abraham Accord was a "nightmare" for Iran. He’s right. If, as expected, other Arab nations follow the UAE’s lead, Iran, not Israel, will be alone in the region. The Abraham Accord also sets up the UAE as a broker between Iran and the United States, which terminated its nuclear-arms disarmament agreement with Tehran.

Fourth, this agreement is manifestly good for a new generation of Palestinians who deserve more than empty rhetoric and reactive gestures. The Palestinian Authority’s collapse is now a real possibility—whether caused by Palestinian revolts or U.S.-

Israeli initiatives. This is an opportunity for Palestinian Authority leadership to assume responsibility. They should seize the moment.

Lastly, now that the Abraham Accord is a reality,  it is time to recognize the possibility that people may be suddenly seeing the light at the end of the dark tunnel in the Middle East.