A Vietnam “Solution” to the Afghanistan War? 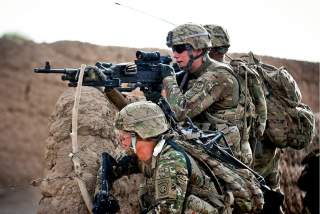 It was in 2010 that United States President Barack Obama told an interviewer that he could easily imagine a situation in which "we ended up staying in Afghanistan for another five years, another eight years, another ten years. And we would do it not with clear intentions but rather just out of an inertia."

Last year, well into that decade of inertial guidance, President Donald Trump, although noting that his “original instinct was to pull out,” authorized an increase of a few thousand American troops to the war in Afghanistan. It was, he said, “a plan for victory.” However, he then defined “victory” as something more akin to a stalemate—preventing the Taliban from taking over and then perhaps negotiating “a political settlement.”

Earlier this month, a brief three-day ceasefire took place, and Afghanistan President Ashraf Ghani has said he is willing to negotiate with the Taliban at any time and in any place. However, the Taliban has repeatedly said it wants to talk with the United States directly and that an American military withdrawal has to be a primary, up-front part of the deal.

There is, as it happens, a precedent for this condition.

It happened in the January 1973 agreement in Vietnam between the United States and the Communists that settled the war there for a while. It contained several elements that can be applied to the present, essentially stalemated, situation in Afghanistan. These situations are parallel as Afghan forces are incapable of being able to seize, hold, and then coherently govern areas controlled by the Taliban. Furthermore, substantial elements in the Taliban recognize that a takeover of government strongholds, in particular, the heavily-populated capital area of Kabul, is likely impossible.

These elements include 1) a cease-fire in place, 2) withdrawal of U.S. military forces, 3) continued resupply of the central regime by the United States, and 4) an exchange of prisoners. For instance, the Taliban has for years been particularly interested in getting the release of some aging prisoners in Guantanamo. The United States might still retain a considerable presence in the country, but any transfers of funds or munitions would be handled by civilians and any training, or private contractors would handle other military contributions.

As noted, the Taliban, while probably open to talks, wants only to negotiate with the United States, not with what they call the “slave” or “puppet” regime in Kabul. That happened as well in Vietnam where the U.S. pushed ahead with the 1973 agreement often without substantive participation by the South Vietnamese government.

However, there are, not surprisingly, some problematic elements to this proposal.

One is that the Taliban, unlike the communists in Vietnam, is not a unified force. There are disagreements and factions aplenty. The United States had contributed to this process at times as in 2016 when it killed the top Taliban leader who may have been favorable to a settlement only to have him replaced by a hardliner.

Moreover, also unlike Vietnam, an agreement with the Taliban would not bring the end of all fighting because there are spinoff and independent insurgent elements throughout the country. However, it is also at least conceivable that some of these could be brought into the agreement.

This case is still very much like Vietnam in that the settlement might well prove to be only temporary. In Vietnam, after a decent interval of two years, the communists launched an offensive and the U.S.-supplied South Vietnam military and government folded in fifty-five days. The United States wrung its hands from afar and then promptly, and with remarkably little obvious regret, moved on to other concerns. Later on, as it happened, the United States and the communist regime in now-unified Vietnam became bosom buddies.

It is possible that Afghan forces, trained and funded by the United States, would similarly collapse when pushed, but that is far from a certainty. For one thing, the Taliban, as a military force, is far weaker than the communists in Vietnam were in 1975.

On the brighter side, after a cease-fire, the main Afghan forces might over time develop a degree of cooperation and coordination even though the country would likely remain effectively partitioned. A great deal has changed since the American invasion, and a wired-in generation has been developed in Afghanistan’s cities. And at least some in the Taliban realize that a full return to the Islamic Emirate that existed there before the invasion is no longer possible.

But partition has been the effective condition for some time—indeed, it is how Afghanistan has traditionally been organized. The difference would be that the war, a decades-long disaster for all involved, would be ended or at least substantially tempered.

To begin with, however, the United States needs to realize that it would have to negotiate alone at least at the start and that a military withdrawal must, as in Vietnam, be a key up-front component of any agreement.

John Mueller is a senior fellow at the Cato Institute and a political scientist at Ohio State University. Among his books are The Remnants of War, Atomic Obsession, Retreat from Doomsday, War and Ideas, and (as co-editor) A Dangerous World?