Vietnam and the United States: The Ties That Bind 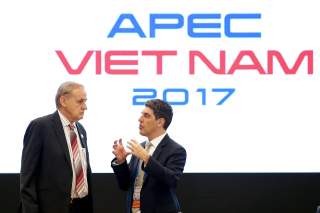 For watchers of U.S.-Vietnam relations, it is considered business as usual that the U.S. presidents visit Vietnam only at their “sunset” time—the final months or year while they are in office. That was the case with former presidents Bill Clinton, George W. Bush and Barack Obama.

The year started with the official visit by Vietnamese prime minister Nguyen Xuan Phuc to the United States, where he was welcomed by President Donald Trump at the White House. The two leaders discussed numerous issues of mutual concern, including the roadmap to develop, in a more comprehensive manner, the relations between the two countries which were once adversaries but are now equal friends. This visit contributed to the promotion of confidence and mutual understanding, and helped provide American political circles, scholars, businesses, investors and the general public with a better understanding of Vietnam as a country of renovation, integration and development.

On October 6, Admiral Scott H. Swift, Commander of the U.S. Pacific Fleet, visited the historic battle site in the Bach Dang river where ancient Vietnamese heroes defeated invading armies originating from their northern neighbor on three separate occasions. A few days later, General Nguyen Chi Vinh, Deputy Minister for National Defense, joined his counterpart, U.S. Deputy Assistant Secretary of Defense Robert Scher, at the Pentagon for the Defense Policy Dialogue. This was followed by a moving meeting with former GI’s who have played an important role in the normalization of diplomatic relations and further promotion of cooperation between the two countries.

Now, as Vietnam hosts APEC 2017, President Trump will come to attend the APEC Economic Leaders Week and pay his reciprocal visit to Hanoi. As the author of The America We Deserve, The Art of The Deal, Think Like A Billionaire and Midas Touch: Why Some Entrepreneurs Get Rich and Why Most Don’t, and is a very well-versed entrepreneur, his participation will surely be a contribution to the success of the event.

All of this speaks volumes about the actual state of U.S.-Vietnam relations.

An aesthetician once said to that if Helen of Troy’s nose had been just a bit shorter, then the world would have been totally different. Due to the twists and turns of history, the relations between the United States and Vietnam have gone through ups and downs for quite a long time, resulting in so much suffering for the peoples of both nations. But Vietnam has made it very clear that she “shelves the past and looks to the future,” earnestly striving to improve the U.S.-Vietnam relationship through earnest cooperation on “sensitive issues” for the interest of the two countries. The two governments have tried their best to do away with the “pains in the neck” and would by no means let the past hinder the present and future progresses in their relations, making breakthroughs in economic, cultural, education and defense cooperation. The upcoming visit by President Trump will be another push for the development of the relations between the United States and Vietnam.

Since the lifting of the trade embargo and the normalization of diplomatic relations, trade relations cooperation the two countries has developed dramatically. The 2016 two-way trade volume continued to increase by 20 percent, from approximately $400 million to about $53 billion, making the United States the third largest trade partner of Vietnam. In term of FDI, the United States ranks eighth out of 112 countries and territories which are investing in Vietnam. American companies are happy doing business in a stable environment. Vice versa, the United States becomes the biggest “campus” for twenty-one thousand Vietnamese students. The U.S. government is also keen on providing Vietnam with modern coast guard boats and improving the exchanging of intelligence.

By the same token, Vietnam always pursues an independent foreign policy, wishing to be a trusted friend and a responsible member of the international community committed to peace, security and development.  Even with its geostrategic location and well-known reputation as a giant-killer, the country has repeatedly reaffirmed that it will never be pressured by anyone, and in the same vein, will not ally with one country in order to oppose the another. Vietnam consistently stands for the peaceful resolution of disputes and tensions in the region, and welcomes any other presence that may be positive toward that end. Against the Southeast Asia backdrop, Vietnam must be strong so as to safeguard its independence and sovereignty.

The official visit by President Trump will be significant at a time when the regional situation tense due to circumstances in some parts of the sea surrounding several countries of Southeast Asia. It will therefore have profound implications beyond the bilateral relationship. The White House announced that during his first Asia trip, President Trump will present a vision for a free and open Indo-Pacific region. Discussion about this vision will surely find receptive ears in Hanoi. In a playground where there are often big bullies, one needs to have some bigger boy just in case. Lasting peace, security and stability in the region at this critical juncture needs that kind of big boy who would live up to his commitments.

The Vietnamese are peace-loving people and ever willing to welcome anyone who comes with a good intentions. Other former U.S. presidents had the opportunities to feel for themselves the hospitality from the “people of the smile.” It is unfortunate, due to heavy schedule of Leaders Week, that President Trump will be very busy exchanging ideas with the APEC Leaders and with the CEOs rather than with the rest of the population, all of whom are eagerly looking towards meeting the president of a superpower “in the flesh.”  But it is for sure that the people of Quang Nam and Da Nang will be giving him a most cordial welcome just as his predecessors had received in Hanoi and elsewhere they went in Vietnam.

One needs two hands to clap. Vietnam and the United States make two. It is believed that a big and meaningful hand-clapping is forthcoming this November.

Ambassador Nguyen Thanh Chau is the former Permanent Representative of Vietnam to the United Nations.