This Vietnamese Base Will Decide the South China Sea's Fate 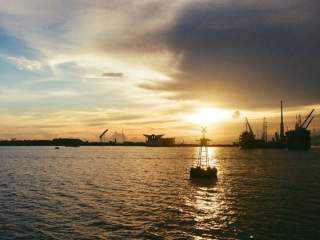 Tensions are running higher in the South China Sea as it becomes increasingly evident that China’s land reclamation and military buildup represents a concerted policy by Beijing to carve out a large exclusive economic and strategic domain for itself. The situation could further deteriorate if Beijing decides that with the United States absorbed by a presidential race for the ages, the time is right to further consolidate its hold on the disputed territories. No matter what China’s next steps are, it is important for U.S. policymakers to have an accurate understanding of what Southeast Asian states are willing and not willing to do in solving their territorial disputes with China. This is particularly true in the case of Vietnam.

Vietnam is the most capable and determined Southeast Asian state to challenge China’s claims in the South China Sea. The Vietnamese Navy fought several bloody skirmishes with the PLA over the Spratly Islands, and has been coordinating with other neighboring navies to carry out joint operations near the disputed reefs and shoals. Although China has been more provocative as of late, Vietnam also has a history of carrying out bold moves to stake claims in disputed waters. Lastly, Vietnam’s leaders are less likely to give in to Chinese pressure to abandon multilateral efforts to solve the dispute in favor of one-on-one talks that Beijing could readily dominate.

Vietnam is also home to the Cam Ranh Bay naval base, which is considered one of the best deep-water ports in all of Southeast Asia. The port’s strategic value is further enhanced by an adjacent airport suitable for landing heavy transport planes and strategic bombers. If a major naval power gained permanent access to the base, it would be difficult for any other country to exercise sole control over the South China Sea, even if that country held most of the disputed islands in question.

Cam Ranh was used by the French and Japanese navies during their respective periods of colonial rule and occupation. The modern base was built by the U.S. Navy during the Vietnam War. As the war intensified, the base steadily grew in importance. Cam Ranh served as a major logistics hub, a tactical fighter base and the primary location for treating injured U.S. soldiers. Cam Ranh was handed over to the South Vietnamese in 1973 as part of a general U.S. drawdown. Two years later, the base fell to the advancing North Vietnamese army.

Much to the disappointment of the Soviet Union, Vietnam initially declined to lease the base to the Soviet Navy at the end of the Vietnam War. It would take the 1979 Sino-Vietnamese War, and the massive Soviet military airlift to aid the Vietnamese army, for Hanoi to agree to a twenty-five-year lease of Cam Ranh’s facilities to the USSR. The Soviets moved quickly to expand the base, making it the largest Soviet foreign installation outside of eastern Europe. In addition to being a naval hub, Cam Ranh was used for signals intelligence against both the United States and China.

After the collapse of the Soviet Union, Russia had little need for Cam Ranh and the base was allowed to fall into a major state of disrepair by the time Russia left it in 2002. Since then, the Vietnamese government modernized the port and has allowed multiple navies to call on Cam Ranh— setting the stage for intense speculation about its future.

By most metrics, the United States is the frontrunner for regaining base access to Cam Ranh. Since normalizing diplomatic relations with Vietnam in 1995, bilateral economic and security ties have steadily grown in importance. In 2014 the United States relaxed an arms embargo in place since the 1980s, and there is strong support for lifting the ban on selling lethal weapons to Hanoi as well. Despite being bitter Cold War foes, most Vietnamese hold a positive view of the United States. On a strategic level, Vietnam remains suspicious of China’s long-term intentions and sees the United States as an important security partner.

Granting the United States access to Cam Ranh would be a major symbolic affirmation of a budding alliance between Washington and Hanoi, and would neutralize the military value of many of China’s installations in the South China Sea. On the other hand, it would also likely precipitate a serious deterioration in Sino-Vietnamese relations. At the very least, China could impose major economic punishment on Vietnamese businesses. Since the Vietnamese leadership likely believes that U.S.-Chinese relations are on an inexorable path towards greater competition, Vietnam would prefer to be courted by both Washington and Beijing rather than be forced to lean decisively towards the United States. Hanoi also has some residual doubts about the level of U.S. resolve in the South China Sea. Thus, the cost of inviting the United States back to Cam Ranh outweighs the current benefits.

Russia has been perhaps the most explicit in its desire to return to Cam Ranh Bay. Russian experts were hired for the recent modernization of the port, and Vietnam allowed the airfield to be used for refueling Russian bombers, prompting serious concern from the State Department. A base in Vietnam would be of largely symbolic value for Russia (the Russian Navy would be able to spare a handful of ships, at best) but it comports with the Kremlin’s broader strategy of restoring international prestige and playing a more active global role. Also working in its favor are longstanding military relations with Vietnam; the Vietnamese military continues to acquire most of its weaponry from Russia, including a recent $2.6 billion purchase of Kilo-class submarines. For its part, Vietnam has been publicly supportive of greater Russian involvement that falls short of outright ownership of the base: Hanoi recently granted Russia simplified naval access to the port.

The biggest factor working against Russia’s case is Moscow’s growing convergence with Beijing on the South China Sea dispute. Russia’s economic woes and international isolation after Crimea’s annexation and the war in eastern Ukraine have made the Kremlin increasingly reliant on China. As a result, Russia is now opposing the “internationalization” of the South China Sea dispute and calling for it to be resolved through direct talks of the parties to the dispute, essentially mirroring China’s official position. Under such circumstances, Russia’s preferential use of Cam Ranh’s facilities is unlikely to lead to an exclusive basing agreement.

Japan is also no stranger to Cam Ranh Bay. Two Japanese destroyers have called to port in Cam Ranh this year, as the Japanese navy steps up its involvement in the South China Sea. While the logistical need is there, it is highly unlikely that Vietnam would allow Japan permanent access to Cam Ranh. The move risks inviting major backlash due to Japan’s legacy of wartime occupation (the base was used for the invasion of Malaysia in 1942), which would play into China’s narrative about the revival of Japanese militarism. The decision is unlikely to sit well with Japan’s electorate, either, which is already deeply apprehensive about Prime Minister Shinzo Abe’s more activist defense policy. In short, Japan is a long-shot candidate for the Cam Ranh base.

Even though China invaded Vietnam in 1979 and subsequently clashed over the disputed shoals and reefs in the South China Sea, China’s bid for the base cannot be entirely ruled out. Both countries have developed strong economic relations, there are pro-Chinese elements within the Vietnamese Communist Party and Hanoi has hinted in the past that the base could be leased to China. During the late 1990s, when Vietnam hoped to renegotiate Russia’s rent payments for Cam Ranh, Vietnamese negotiators suggested that the base could be turned over to the United States or China if Russia did not pay up. While Vietnam has more ties with China than most in the United States realize, such a move would still be very unlikely in the current climate. A Chinese presence in Cam Ranh would further cement China’s position in the South China Sea and would risk turning the strategic international waterway into a de facto Chinese lake.

None of the above. Vietnamese officials have stated on several occasions that Hanoi is not interested in signing a military agreement for the use of Cam Ranh’s base with any country. They should be taken at their word. Permitting the naval facilities to be open to all international vessels allows Vietnam to pursue closer relations with several countries at once and keep its long-term options open. Vietnam’s position on Cam Ranh could change, but only if the situation in the South China Sea significantly deteriorates. And while the current dispute with China is serious, it’s nowhere close to the antagonism of the late 1970s, when the two countries fought a brief but intense conflict.

Yevgen Sautin currently works in the financial sector. He received an M.A. from the University of Chicago and speaks and reads Chinese and Russian. Mr. Sautin was a David L. Boren Fellow at the National Taiwan University and a Junior Fellow at the Carnegie Endowment for International Peace.