Vietnam’s Pivot to America Will Continue 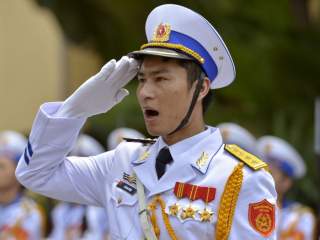 How Vietnam’s foreign policies will change after January’s 12th Party Congress has been a subject of vibrant debate in recent weeks, especially because the party congress has consolidated the power of party conservatives, led by General Secretary Nguyen Phu Trong. Some commentators have espoused the view that the reappointment of Mr. Trong will lead Vietnam to lean more towards China, due to the two countries’ shared Communist ideology and political system. The leadership reshuffle, which also involves the retirement of Prime Minister Nguyen Tan Dung, would allow leaders to reemphasize the security of the Communist Party over economic reform and nationalism. According to a recent commentary in the National Interest, this could mean that Vietnam’s pivot to the United States might come to an end under the new leadership, despite positive developments in recent years. The author, Matthew Pennekamp, argues that “Trong has repeatedly placed his thumb on Vietnam’s foreign-policy scales whenever he felt they weighed too much in America’s favor.” While much is still uncertain, the article is overall pessimistic about the future of U.S.-Vietnam relations.

Others argue that major changes in Vietnam’s foreign policies are unlikely, and that it would avoid leaning towards one major power to balance against another. Past lessons, such as China’s hostility towards Vietnam after the latter struck a defense treaty with the Soviet Union in 1978, have taught Vietnamese leaders that a clear balancing policy can be harmful for the country’s security. This argument predicts that Hanoi will continue to cultivate ties with Washington, while mixing the elements of engagement and resolve in its relations with Beijing. Further, it would keep developing stronger ties with other regional actors, including Japan, ASEAN, India and Russia. According to Carl Thayer, even after the 12th Party Congress, Hanoi will continue to pursue a policy of “multi-polar balancing – diversification and multilateralization of relations – rather than a narrower policy of balancing relations between China and the United States.”

Our assessment is that Vietnam’s pivot to America will likely continue into the future, for two key reasons:

1) Mr. Trong’s first term as general secretary coincided with a period of growing Chinese assertiveness. Based on this firsthand experience, he is unlikely to lean towards the northern neighbor, even though his tactics might be more conciliatory;

2) The signing and implementation of the Trans-Pacific Partnership would create incentives for Vietnamese leaders to enhance their cooperation with America. While the foreign policy making process in Vietnam is relatively closed, we find strong evidence to back our arguments in two key documents—the Resolution of the 12th Party Congress (January 28, 2016) and parts of the working agenda of the second meeting of the Central Committee (March 13, 2016). Both have been released publicly by the state media and can provide us with a window into the foreign policy thinking of the new leadership.

Even though General Secretary Trong is regarded by foreign observers as a conservative leader, he has accumulated experience dealing with China since his rise to the position in 2011. His first term overlapped with a period during which China adopted more assertive policies towards the South China Sea. Its reclamation and construction projects can significantly expand its naval and air power projection capabilities. With airstrips and likely future military bases, China can easily launch an attack on nearby Vietnamese forces, harass Vietnamese fishing and patrol boats, and even hamper Vietnam’s access to the high seas. In addition, China has imposed annual fishing bans and persuaded international oil companies from conducting business with Vietnam. The oil rig crisis in 2014 was arguably the most serious confrontation between Beijing and Hanoi since the 1979 border war. The Vietnamese Communist Party under Mr. Trong’s leadership has also watched China’s tough policies towards the Philippines, including the Scarborough Shoal standoff in which China forcibly occupied the shoal, as well as China’s denunciation of the Philippines’ case against the nine-dash line.

Analysts often focused on conservative camp’s hesitation to criticize China, as compared to former prime minister Nguyen Tan Dung. However, it is important to emphasize that China’s aggressiveness towards Vietnam happened while Mr. Trong was in power. Experience from the last few years would strongly suggest to the current leadership that China can inflict severe damage to Vietnam, both economically and militarily. This is suggested in the documentary evidence as well. The 12th Party Congress Resolution has highlighted that “increased major power competition on many fronts in the region, as well as complex developments in the East Sea [South China Sea] has negatively impacted our country.”

In addition, the document laments that the challenges to national defense and sovereignty have put additional pressure on the economy and the government budget, making it more difficult to meet other social-welfare goals. This signals that despite ideological affinity, the new leadership is well aware of the threat and pressure coming from the northern neighbor. Furthermore, they would be well aware of the strong anti-Chinese sentiments in the country at the moment. Major street protests broke out during the oil rig crisis in 2014. Recently, the public has also expressed strong dissatisfaction about a controversial metro construction project in Hanoi. The Chinese contractors have repeatedly pushed back the completion date of the project and almost doubled its costs. The public has accused officials of colluding with corrupt and incompetent Chinese contractors, which has further intensified resentments against China.

While Mr. Trong, in the position of the party chief, might not be as outspoken as former prime minister Dung, he is likely not less concerned about the threat from Beijing, especially as he has witnessed all the strain between the two countries during his first term. While outward acts of deference will continue, in the form of high-level visits or crackdowns on anti-China protests, it is unlikely that Vietnam will tilt towards Beijing. Political elites within the party might differ in their outlook towards reform and their foreign policy tactics, but to ensure domestic stability, they need to pay sufficient attention to national security and sovereignty.

Second, for the sake of domestic economic development, the new leadership needs to take advantage of the TPP agreement, which will create further incentives for deepening relations with the United States. The 12th Party Congress Resolution emphasizes the interconnectedness between domestic conditions and foreign policies, and how foreign policies can be implemented to serve domestic needs. However, this time around, leaders stress in particular the importance of the nation’s participation in the TPP trade agreement for domestic stability and economic growth.

The documents are relatively frank about the problems that the economy has been facing since the financial crisis, including the risk of lagging further behind other ASEAN economies, sluggish GDP growth and low levels of living standards, the effect of economic slowdown in other parts of the world, and the slow pace of economic reform. In this context, both documents highlight that the TPP can be an important driver for Vietnam’s export and economic growth overall.

According to the working agenda of the Central Committee meeting, the trade agreement with higher standards can help Vietnam overcome domestic difficulties, which can otherwise threaten political stability if they are poorly managed. Several other news reports and analyses have suggested that the country stands to gain significantly from the TPP, which can increase the country’s GDP by 11 percent (or $36 billion) and its exports by 28 percent in a decade. Apparel, footwear and seafood exports are likely to be the biggest winners. Vietnam will also benefit from increased FDI inflow as companies, such as those from China, relocate to Vietnam to take advantage of reduced tariffs.

If the new leadership can successfully implement the requirements of TPP, while simultaneously protecting the country’s fundamental political structure, this would set a new precedent for U.S.-Vietnam relations. This would mean that both can find a middle way to accommodate American liberal values as well as the stability of Vietnam’s Communist Party. The trade pact might be able to convince conservative leaders in power that “peaceful coexistence” with a democratic superpower is not only possible, but can benefit Vietnam’s economic and social development.

We are not arguing that the TPP agreement is the most important factor in stabilizing Vietnam-U.S. relations, but it can create a medium-term lock-in effect. Positive developments, such as the signing of the Memorandum of Understanding on Advancing Bilateral Defense Cooperation in September 2011 and the Comprehensive Partnership in July 2013, have signaled the desire on both sides to move towards stronger relations in recent years. In addition to this, the new leadership will receive President Obama in May, which might help to shift public perception of their foreign-policy stance and signal their eagerness to work with the United States.

To deter Beijing from continuing to change the status quo in the South China Sea and militarizing the dispute, Vietnam must cooperate with the United States. Ultimately, the greatest value of such cooperation, both bilateral and multilateral, lies in the ability to send a strong deterrence signal to China. The full lifting of the United States’ lethal-weapons embargo is a crucial move for more robust defense cooperation. There would be joint maritime patrols between the U.S. and Vietnamese navies, and a more robust U.S. commitment to ensuring maritime security and stability in the South China Sea in the event of Chinese aggression.