A Visit to Russia: Can Relations Be Improved? 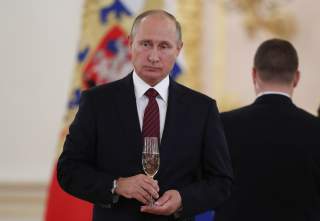 After returning from a series of meeting with senior officials in Moscow, the degree to which Russian officials remain eager to improve the U.S.-Russia relationship is apparent. Russia’s leaders are certainly not desperate—nor are they prepared to accept American terms to resolve the many outstanding disputes between Washington and Moscow—yet they are still hopeful that some way, somehow, President Donald Trump will succeed in overcoming political opposition to build a new and more cooperative bilateral relationship. What they may not yet fully appreciate is the depth of anger and resentment surrounding Russia’s interference in the 2016 presidential campaign, perhaps the greatest single obstacle to their aspirations for rapprochement. Nevertheless, they were positive in tone when talking about President Trump, U.S. officials and the United States.

I traveled to Moscow from September 25 to September 30 with a delegation organized by the Center for the National Interest. The bipartisan group included Drew Guff, Managing Director and Founding Partner of the investment firm Siguler Guff and a vice chair of the Center for the National Interest; Dov S. Zakheim, another Center vice chair, who served as Under Secretary of Defense during the George W. Bush administration; Zalmay Khalilzad, a Center board member and former U.S. Ambassador to the United Nations, Iraq and Afghanistan; Celeste Wallander, President of the U.S.-Russia Foundation and a former Special Assistant to the President and National Security Council Senior Director for Russian and Central Asian Affairs in the Obama administration; and my colleagues Center President Dimitri Simes and George Beebe, a former head of the CIA’s Russia analysis (until 2009) who now directs the Center’s Intelligence and National Security Program.

In addition to participating in a day-long seminar at the Moscow State Institute for International Relations (MGIMO), we met a number of senior officials including Deputy Prime Minister and Russia’s former NATO Ambassador Dmitry Rogozin, Foreign Minister Sergey Lavrov, Economic and Trade Minister Maxim Oreshkin, and Deputy Foreign Ministers Sergey Ryabkov and Mikhail Bogdanov. We also met Konstantin Kosachev, who chairs the Federation Council’s Committee on International Affairs, and the Committee’s newly elected vice chair—Russia’s former Ambassador in Washington, Sergey Kislyak. The trip was strictly a private one; we did not seek or receive any messages to deliver in either direction. Our goal was a candid exchange of perspectives with a wide range of officials and experts in Russia’s political and foreign policy establishments.

Russian officials were largely dismissive of U.S. and European economic sanctions, which some indirectly credit with significantly strengthening Russia’s agricultural sector—to such an extent that they claimed Russian products may fiercely compete in Europe if and when the European Union eases it sanctions and Russia lifts its protectionist counter-sanctions. Indeed, the U.S. Department of State itself asserted in 2016 that a loss of “at most … 1 percent of GDP can be potentially explained by sanctions” as opposed to declining global energy prices. The combination of “at most” and “potentially” in this sentence suggests that there is little empirical evidence that sanctions have caused real damage to Russia’s economy. Moreover, since U.S. sanctions could account for only a small part of this—because Europe’s economic relationship with Russia is far larger than America’s—there is no reason to think that new U.S. sanctions, which have yet to be fully implemented, will make a material difference at the macroeconomic level. (The State Department did find that sanctioned companies appeared to lose significant revenue and assets.) Still, some officials did privately admit that the sanctions undermine Russia’s investment climate, especially among foreign investors.

At the same time, however, some officials reacted quite strongly to the Trump administration’s decision to close Russia’s consulate in San Francisco, the latest move in an escalating diplomatic spat that began with the Obama administration’s expulsion of thirty-five Russian diplomats and seizure of two diplomatic properties in December, following a widely publicized intelligence community report on Russia’s election interference. Even in this area, however, our interlocutors seemed to prefer curtailing the dispute over extending it—notwithstanding President Vladimir Putin’s recent hint that the Kremlin could cut another 155 people from the number permitted to work at the U.S. Embassy in Moscow.

Yet containing this battle between the State Department and Russian Foreign Ministry bureaucracies may well be the easiest step in working toward a functional U.S.-Russia relationship. Far more important and more challenging will be addressing Russia’s election interference, which has poisoned the relationship to an extent that Russian officials—who describe the matter strictly as a U.S. partisan slugfest brought on by sour-grapes Democrats—did not seem to appreciate. As a practical matter, the fact that many Republicans are prepared to defend the Trump administration and to assert that Democrats are exaggerating and exploiting the many investigations now underway does not mean that the same Republicans are prepared to exonerate Moscow. Members of our group made a case that Russian leaders must take this matter seriously and that Russia’s past blanket denials have been counterproductive. This triggered vigorous exchanges that did not produce agreement but hopefully contributed to greater recognition of this problem among Russian officials.

Building the relationship that at least some Russian officials appear to want will at a minimum require a better understanding of what took place during the election campaign and a meaningful commitment that it won’t happen again. Some Americans may want much more than that and others may not find anything the Kremlin offers to be credible or satisfying. Still, with everything that has happened, a recent Chicago Council on Global Affairs poll found that 43 percent of Americans continue to think the United States should “undertake friendly cooperation and engagement with Russia.” While this is down from 58 percent a year ago, that may be enough for the president to work with—if the two sides can address the interference issue first.

Beyond Russia’s interference, of course, U.S. and Russian officials would have to develop workable and sustainable solutions to at least some of the issues that now divide them. Setting aside the 2016 presidential election, the ongoing conflict in eastern Ukraine is probably the most difficult of these. U.S.-Russian differences in Syria—while significant—are simpler. In both cases, however, there appear to be multiple perspectives within the Russian government; without clear directives from Mr. Putin to integrate them into a coherent policy, Russia’s diplomatic, economic, military and security officials will each seek to pursue their own objectives, sometimes contradicting one another. Also, because Mr. Putin does not seem to feel real pressure from U.S. sanctions, he is unlikely to be disposed to offer major concessions to the United States simply to reach agreement, especially in the runup to Russia’s 2018 presidential elections. Thus “getting to yes” on these or other issues will take persistence and creativity.

The bottom line for the United States is that despite political controversy and a rocky start, Russian officials haven’t given up on the Trump administration. If the administration wants to work with Moscow—and can navigate between the Congress and the media to do so—it will find an interested though quite difficult interlocutor. We can count on Mr. Putin to put Russia first.

Image: Russian President Vladimir Putin holds a glass of champagne during a ceremony to receive credentials from foreign ambassadors at the Kremlin in Moscow, Russia October 3, 2017. REUTERS/Pavel Golovkin/Pool