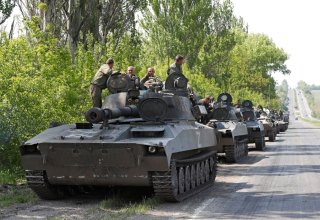 Russian president Vladimir Putin has made a dangerous choice. Not the one to invade Ukraine, although that has proved disastrous for everyone involved. Nor the one to continue wasting Russian lives in an increasingly unwinnable war. Instead, perhaps the riskiest decision to come from the Kremlin has been the increasing tendency to attribute the failures of the Russian military to foreign assistance provided to Ukraine and employ threats of nuclear force to discourage such aid. The dangerous combination of ignoring Russia’s failures while at the same time emphasizing nuclear options risks opening the door to a dangerous cycle of escalation.

From the early days of the conflict, nuclear threats have been geared more toward warning third parties, generally NATO, not to get involved. More recently, Putin himself said, “If someone intends to intervene in the ongoing events from the outside, and create strategic threats for Russia that are unacceptable to us, they should know that our retaliatory strikes will be lightning-fast ... We have all the tools for this, things no one else can boast of having now ... we will use them if necessary.” In case there was any ambiguity, the editor of two of Moscow’s leading propaganda organs posted on April 28 “The Anglo-Saxons publicly encourage Ukraine to take their hostilities into Russian territory. And they give them means to carry that plan out. What choice do you leave us, idiots? The total annihilation of what remains of Ukraine? A nuclear strike?” Leaving aside the depressing reminder that Russia is prepared to destroy Ukraine rather than accept its independence, these words from a creature of the regime indicate that the nuclear option remains on the table.

All this is consistent with Putin’s oft-expressed contention that Ukraine has never been a real country capable of looking after its own affairs. The response to the 2014 aggression, both the poor performance of the Ukrainian army and the West’s limp response, taught Putin to expect similar results in 2022. When Russia’s invasion failed so spectacularly, the search for explanations began, and with it an increasing frequency of warning other governments to stay out of the conflict. This points to an emerging policy from the Kremlin, in which Russian decisionmakers attribute Ukraine’s military success not to the heroic resolve of the Ukrainian people, but rather to the military assistance Ukraine receives from elsewhere.

This puts Russia on a dangerous path. Instead of admitting they underestimated the Ukrainian people and military, and overestimated Russian military competence, Putin and his lackeys have chosen to blame foreign actors. The key word of the previous sentence is “chosen.” Placing the blame abroad is a clear choice stemming from an unwillingness to acknowledge either Ukraine’s legitimacy or the decay of the main instrument of Russian power and prestige. And it is a singularly perilous choice because of its policy implications.

Keep in mind that, whatever Putin’s apologists would want the world to believe, the war continues not because of Western support to Ukraine, but the resistance of the Ukrainian people. If U.S. military aid were enough to keep a failed state going, there would still be a South Vietnam. Should Putin continue to base his policies on the assumption that the Russian military debacle is due to foreign interference, he will soon arrive at a point where he could face pressure to escalate. Thus far, Moscow has opted for threats, including of nuclear weapons use, in hopes of intimidating others, but these threats are growing more specific and could eventually lead to thinking that more than threats will be required to achieve the desired result—and the terrifying prospect that a nuclear weapon could be used to make a point. Obviously, it would make little sense to validate the use of nuclear threats and cement them forever as a viable instrument of state policy by caving to Moscow’s nuclear bullying. Trying to diminish the chance of a nuclear weapon being used in Ukraine could in this way greatly increase the possibility of such use in the future whether in Ukraine or elsewhere.

Pretending that NATO countries are somehow responsible for Russia’s dangerous choice will not protect the world from the consequences. Western governments should reject nuclear blackmail and renew pressure for an end to hostilities based on international law. Part of the approach should be openness to new arms control initiatives, along with a greater emphasis on negative security assurances, i.e., that nuclear weapons would not be used against a non-nuclear state. It should be clear that any appearance of Russian success, even if it is intended merely as “face-saving” could be spun as validating nuclear blackmail—a mortal blow for global non-proliferation efforts. The lesson to be learned should not be that nuclear threats are a viable policy but that the world will be safer with fewer nuclear weapons.

John Erath is the Senior Policy Director at the Center for Arms Control and Non-Proliferation, and a thirty-year veteran of the State Department, where he focused on arms control and non-proliferation issues.