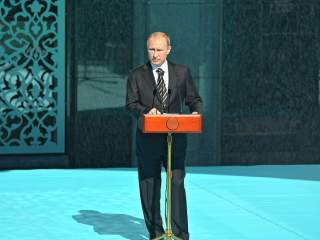 If Turkish President Recep Tayyip Erdoğan thought last November that by downing a Russian Su-24 bomber near the Turkish-Syrian border he could contain Vladimir Putin’s Middle Eastern ambitions, he is certainly regretting that now. An incensed Vladimir Putin vowed that Turkey would come to rue its actions. He warned that Russia would not settle its accounts with Turkey with mere economic sanctions, adding, “We know what we need to do.”

What Putin meant is becoming clear. Earlier this month, in what can only be described as a menacing signal to Ankara, the Syrian Kurdish Democratic Union Party (or PYD) formally opened a representative office in Moscow, its first in a foreign country. Meanwhile, inside Syria, the PYD’s armed wing has been using Russian arms and Russian air support to aggressively expand the amount of territory it controls along the Syrian-Turkish border. Ankara is alarmed, and rightly so. Despite possessing its own acronym, the PYD is a subsidiary of the Kurdistan Workers’ Party (Partiya Karkeren Kurdistane), or PKK, which is currently intensifying the insurgency it is waging in Turkey’s southeast. There, PKK activists have declared Kurdish self-rule and PKK fighters are holing up in cities, digging trenches and taking on Turkish security forces with everything from snipers and rocket propelled grenades to improvised explosive devices.

Erdoğan has declared his determination to crush the PKK, but no one should hold their breath: the Turkish Republic has been trying to vanquish the PKK for over three decades. Yet the PKK has perhaps never been so robust and well positioned, militarily and diplomatically, as it is now. Exploiting the collapse of central state control in Iraq and Syria, the PKK built its headquarters in the secure Qandil Mountains of northern Iraq a decade and a half ago. More recently, it established, via the PYD, the de facto autonomous governorate of Rojava in northern Syria. Now it is again waging a burgeoning insurgency inside Turkey’s southeast.

Perhaps most significant is that the PKK’s contribution to the fight against ISIS has won it unprecedented international legitimacy. Whereas in 1997 Washington formally declared the PKK a terrorist organization, and was followed in this designation by the European Parliament, today, U.S. Special Forces are training and arming the PPK’s subsidiary inside Syria. Washington justifies such collaboration with the fiction that the PYD is separate from the PKK, but efforts are under way in both the United States and Europe to remove the terrorist label. If those efforts succeed, they will yield a major boon to the PKK.

But the PKK may not need the assistance or goodwill of the West in order to realize its ambition of an independent Kurdistan. The PKK’s role in the war with ISIS also rekindled its relations with the oldest Great Power patron of the Kurds, Russia. The goals of the PKK and Russia possess a devilish synergy. The two now share common enemies in ISIS and Turkey. By working with the Kurds, Moscow can prosecute the war against ISIS, punish Turkey, outmaneuver the United States in Syria and provoke a rift in Turkish-U.S. relations, thereby weakening NATO.

The first thing observers need to understand is that today’s alliance between Russia and the PKK is hardly new or unusual. The Russian-Kurdish nexus has been a recurring feature of Middle Eastern geopolitics for more than two hundred years, since Catherine the Great commissioned the publication of a Kurdish grammar in 1787. Catherine’s interest in the Kurds was not purely academic. Kurdish tribes, tsarist officials recognized, were important actors along Russia’s southern frontiers. From 1804 forward, Kurds played important roles in Russia’s wars with Qajar Persia and Ottoman Turkey. As the century wore on, the Russian army made increasing use of Kurdish units to fight the Persians and Turks.

Kurdish motives for fighting alongside tsarist forces varied, but most often involved resentment at Qajar and Ottoman interference in tribal affairs or sheer opportunism. But by the dawn of the twentieth century, a number of Kurds began to see Russia as their best hope, not just to throw off external interference, but also to transform the Kurds from an overwhelmingly nomadic, tribal and illiterate society into a modern one that could compete in the information age dawning in the twentieth century. The most famous of these was Abdurrezzak Bedirhan, a scion of the last independent Kurdish emir of Cizre (Cizre, not coincidentally, has been the site of some of the most intense fighting inside Turkey today). Deprived of his patrimony and placed in the Ottoman foreign service, Abdurrezzak’s stint in the St. Petersburg embassy in the 1890s converted him into a true Russophile. In 1910, he crossed over to the Russian side and with Russian backing—arms, money and intelligence—began organizing Kurdish tribal chiefs and inciting a series of rebellions against Ottoman rule across Eastern Anatolia.

Abdurrezzak’s efforts were not limited to insurrection. St. Petersburg was the world’s center for Kurdology, and working with Russian experts in academia and the foreign ministry he opened in 1914 a Russian school for Kurds, and planned more schools, believing that a Kurdish elite trained by Russians and educated in Russian universities would lift the Kurds out of their poverty and ignorance. Only the outbreak of World War I dashed his dream.

He was far from alone. In the years leading up to World War I, multiple Kurdish chiefs began collaborating with the Russians to mount a chronic insurrection against Ottoman rule in eastern Anatolia. The depth of Russian involvement with the Kurdish movement was revealed in the famous Bitlis Revolt of 1914, when Kurdish tribesmen seized that town in April. The uprising erupted prematurely, with Abdurrezzak still negotiating in far away St. Petersburg, and thus failed. Upon the revolt’s collapse most rebels made dashes across the border to Russia while four ringleaders, unable to get away, took sanctuary in the Russian consulate where they stayed until the beginning of World War I.

Red Kurdistan, the Mahabad Republic and the PKK: The USSR and the Kurds

The end of the Russian empire in 1917 did not mean the end of Russia’s Kurdish ambitions. In 1923, Soviet authorities established “Red Kurdistan,” a nominally autonomous Kurdish province wedged between Soviet Armenia and Soviet Azerbaijan. It was the first ethnically defined Kurdish entity. Complete with a Kurmanji (Kurdish-language) newspaper and Kurdish schools, its purpose was to serve as a beacon of socialist revolution to Kurds throughout the Middle East. Deciding that devices to export revolution might serve instead to import counterrevolution, however, Stalin disbanded Red Kurdistan in 1930.

But Stalin did not forswear the Kurds as a tool of geopolitics. Divvying up Iran with Churchill in 1941, Stalin oversaw the establishment of a regional Kurdish administration centered in the town of Mahabad in northern Iran. The Mahabad administration declared itself a sovereign Kurdish republic in December 1945, and so when Stalin had to formally withdraw Soviet troops from Iran later year, he conveniently left in place a client state that was complete with Soviet military and political advisers but clothed in Kurdish national self-determination.

The Mahabad Republic lasted just a year. It fell in December 1946, after Truman warned Stalin not to intervene when the shah sent the Iranian army to crush it. But that was not the end of Soviets’ interest in the Kurds. The Iraqi Kurdish Mullah Mustafa Barzani, commander of the Mahabad army (and the father of the current president of Iraq’s Kurdistan Regional Government, Masoud Barzani), took refuge in the USSR in 1947 along with two thousand of his armed followers. Barzani remained in the Soviet Union for over a decade before returning to Iraq.

KGB Chairman Alexander Shelepin advocated using Barzani and other Kurds to “activate the movement of the Kurdish population of Iraq, Iran, and Turkey for creation of an independent Kurdistan.” Shelepin’s policy preference was no passing fashion. Famed Soviet spymasters such as Pavel Sudoplatov and Yevgeny Primakov notably recounted their involvement in the “Kurdish Question” in their memoirs.

As the guardian of NATO’s southern flank from 1952 onward, Turkey became a priority target for Moscow and stoking Kurdish separatism was one means to weaken Turkey. Among other things, the Soviets beamed subversive radio broadcasts to Kurds from inside Armenia, worked with the Bulgarian secret services to arm Kurdish rebels inside Turkey, and recruited Kurds from Turkey and elsewhere who were studying in the Soviet Union to become agents of influence.

The most formidable threat to the territorial integrity of the Turkish Republic to have emerged is the Kurdistan Workers Party. A young Turkish Kurd named Abdullah Öcalan founded it in 1978, during the heyday of Soviet-backed national liberation movements. Although the PKK was not a Soviet creation, as its name indicated it was certainly in the Soviet ideological camp. It espoused a variant of Marxist-Leninism, with the PKK and its founder, Öcalan, serving as the vanguard of the Kurdish socialist revolution. The PKK became a beneficiary of Soviet support, and in 1984 it initiated its violent struggle against the Turkish Republic in pursuit of its goal to establish a Kurdish state.