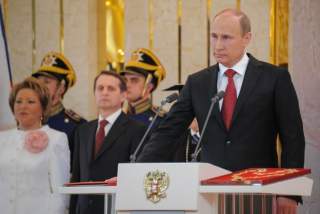 LONDON, UK-  In the recent makeshift referenda in Donetsk and Luhansk unrecognized by the West, a small minority of eligible voters voted in favor of secession from Ukraine. Now, some Western politicians and analysts are wondering: If those people came out to vote for "independence," aren’t we obligated to consider their opinion when pondering the future of Ukraine?

The Kremlin and the Russian Foreign Ministry are voicing similar thoughts, and carefully managing perceptions. In reality, the Kremlin does not care about the fate of the ethnic Russians and Russian-speaking voters in eastern Ukraine. It is concerned with whether Ukraine, which now has a major separatist enclave in the Crimea, can get into NATO and the EU.

Russia has a receptive audience in Western Europe. Germany does not want to intensify its confrontation with Russia and impose a new round of sanctions that could undermine Russian-German trade, which is flourishing. Germany buys billions of Euros worth of gas and raw materials from Russia, and sells back Siemens-made trains and turbines, along with Mercedes and Volkswagen automobiles.

However, Angela Merkel and Barack Obama understand that if they do not respond to Russia right now, they will have to either let Russian aggression slide—or be forced to confront it in a much tougher economic and political conflict. The West certainly is not interested in a hot war.

After Merkel's visit to Washington in early May, the United States and Germany spent the last two weeks in consultations about the details of future measures to be taken concerning Ukraine. The sanctions that are currently in place are not considered to be particularly effective, and the United States and the EU are likely to keep raising the stakes for Russia, hoping to deter any further attempts on the part of Moscow to dismember its "brotherly Slavic country." The alternative, according to experts in both Europe and the US, is another potential Cold War or even a future European hot war.

Another aspect of the current conflict, not yet understood by the United States, is being well monitored in European capitals. That is the foreign policy significance of the internal ideological transformation in Russia. The country’s officials and public figures are now spouting Eurasianism and ultranationalist ideology. Meanwhile, Duma member Vyacheslav Nikonov, Molotov’s grandson, has talked about "the Aryan tribes descending from the Carpathian Mountains" to conquer Eurasia.

Moscow is also becoming a guiding light for the European far right, from Marine Le Pen to the neo-Nazi Jobbik party, as well as for the Italian Lega Nord.

The extreme right, anti-American, anti-Atlanticist forces in Russia are ready to fight not only dark-skinned migrants and bearded “women" at Eurovision, but also the Euro-Atlantic alliance structure that has protected the West since World War II.

Thus, a Fifth International, a loose collection of anti–status quo forces, is emerging out of the chaos of the Ukrainian conflict. Supported by RT propaganda, it provides a new anti-Atlanticist and, in many cases, anti-Islamic and anti-Sunni narrative, which Russia is seeking to define.

Unfortunately, all this begins to set the scene for a transition from a purely geopolitical conflict in Ukraine to an ideological one. Clearly, the West wants to avoid a conflict with Russia. Paradoxically, the sanctions approach is intended to prevent a widening of the conflict, in a George Kennan-like containment strategy.

Short-term sanctions are already in place, which are doing a certain amount of damage to the reputations of both Moscow and Russian business. Leading world business leaders, including the CEOs of Citi and PepsiCo, will not go to the international economic forum in St. Petersburg this week (May 22). It is no secret that they were asked by the White House to skip the forum. If such “heavyweights” do not attend the forum, then the executives of smaller companies could decide not to travel there either.

After Russian Vice Premier Dmitry Rogozin banned sales of the RD 180 rocket engine used for U.S. missile launches, American companies began planning to develop their own heavy space-lift capabilities. And a California pension fund is divesting from an IT group, which owns the Russian social network VKontakte, which posts offensive videos of beatings of gays.

Of course, the Russian economy will not tumble because of these measures, but it will get the message. Increased political risk in Russia is already leading to higher interest rates, a freeze on many investment projects, and capital flight, which this year is projected to hit a record $160-$200 billion.

The expansion of sanctions into the banking sector will create difficulties with financial transactions and credit-card payments. These can be a serious blow to the business activities and private lives of rich Russians, and even of the middle classes, who try to escape to Turkey’s beaches once a year for vacation.

As part of the developing confrontation, a fight over Europe's natural-gas market share is on the way. There are a number of strategies in play that could reduce the dependence of Central and Eastern Europe on Gazprom. These include piping gas from North Africa (Algeria and Libya); launching liquefied natural gas (LNG) terminals in Europe, either on the Croatian island of Krk in the Adriatic Sea, or in Klaipeda, Lithuania, and in Swinoujscie, Poland; the construction of interconnectors; and allowing Qatari and Norwegian gas to travel from Croatia to Bulgaria and Hungary, and from Poland to Ukraine. An LNG terminal on the Black Sea, to supply Ukraine, could also further this effort.

A soon-to-be-completed Trans-Anatolian gas pipeline that in the future could pump not just Azeri, but also Turkmen, Iranian and Kurdistani gas, could further help the EU to diversify its sources of gas imports. LNG from the United States, the Eastern Mediterranean, Angola, and Mozambique is also on its way, along with shale gas from Britain, Romania and Ukraine.

Many Western politicians have regrettably swallowed Russia's seizure of the Crimea, but they should not accept the loss of Donbass and dismemberment of Ukraine. That is why it is important to calibrate new sanctions so that Moscow will stop supporting the separatists. In the long run, this should allow for a return to the status quo ante Crimea and encourage Russia's international behavior to become more benign. The alternative is a new Cold War—or worse, an option too unpalatable to contemplate.