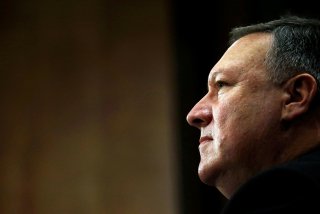 The Trump administration is seeking to portray Secretary of State–designate Mike Pompeo’s early work on North Korea—including an unprecedented meeting with Kim Jong-un—as an indicator that the CIA director is already hard at work on American diplomacy.

News breaking Tuesday night from the New York Times that Pompeo met with the North Korean dictator—according to two sources briefed on the trip—was confirmed Wednesday morning by the president.

“Mike Pompeo met with Kim Jong Un in North Korea last week. Meeting went very smoothly and a good relationship was formed. Details of Summit are being worked out now. Denuclearization will be a great thing for World, but also for North Korea!” Trump tweeted.

But Pompeo’s trip also comes at a time when his Senate confirmation for secretary of state is quite contentious.

Pompeo is bracing for a potential negative recommendation from the Senate Foreign Affairs committee in coming weeks.

News trickling out about the trip to North Korea, as well as a recent trip to ally Japan (as I’ve previously reported) on the issue, has the added benefit of increasing the hardliner Pompeo’s popularity externally, and creating the aura of a budding statesman on the Hill.

Creating such an impression is a goal, three sources close to the White House confirm. “Also need to build momentum for entire Korean approach,” one source tells me: the potential meeting between Trump and Kim Jong-un.

At a private briefing of administration allies on Wednesday morning, it was made clear that Pompeo’s confirmation is the White House’s top priority right now.

The Republicans, besides Sen. Rand Paul and possibly Sen. John McCain, need one Democratic vote to get Pompeo over the finish line.

A top aide to a prominent Democratic senator, who is already a “no” on Pompeo, confirmed this approach: “Yep.”

Top Democrats have begun announcing opposition to Pompeo in no uncertain terms.

“He supports the use of torture. He has longstanding relationships with anti-Muslim extremists. And his hawkish views on Iran and North Korea could very well lead us into another disastrous war. … I will vote against him,” said Sen. Bernie Sanders last week.

Sen. Chris Murphy said he was “impressed by Director Pompeo’s recognition of the many failures of Rex Tillerson’s tenure at the State Department” but “with John Bolton as the National Security Advisor... I am deeply concerned that the president is intentionally surrounding himself with people who will … [prioritize] military solutions over diplomatic solutions. This weekend’s illegal and counterproductive strikes against the Syrian government underscore the urgent need for a Secretary of State who will stand up for the Constitution. … I will vote no.”

The White House needs to turn it around and Wednesday has already provided a positive news cycle upon news of the trip.