A Vote Against Trump Is Not a Vote For Hillary 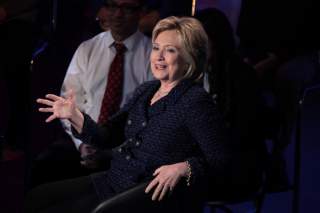 Hillary Clinton offered a compelling case against voting for Donald Trump in the upcoming presidential election. But the arguments she made on her own behalf were far weaker. It was easy for her to go after Trump: all she had to do was quote the inanities and insanities that pass for Trump’s national-security policy. And she did.

She rightly noted that Trump seems to have no problem contemplating the spread of nuclear weapons, whether to Japan, South Korea or elsewhere. She pointed out that he also seems to have no concern about the outbreak of nuclear war between Japan and North Korea, quoting him accurately on that subject: “Good luck, enjoy yourself folks.” Likewise, she cited his equally ludicrous assertions that “maybe Syria should be a free zone for ISIS” and that he “know[s] more about ISIS than the generals do.”

She pummeled Trump on his readiness to leave Europe to its own devices if the allies do not increase their own defense spending; presumably, she also takes issue with her former boss, who complained about “free riders” in his now-infamous Atlantic interview. She rightly stressed that Trump seems far too cozy with Russia’s Vladimir Putin than American national interests would dictate. Her assertion that “if Donald gets his way they’ll be celebrating in the Kremlin” may be less exaggeration and closer to the truth. And she was on the mark when tearing into him for his attitude toward Mexicans, Muslims and women.

Where Clinton fell short, however, was when she began to extol her own virtues and those of the Obama administration. She vigorously defended the Iran nuclear agreement (formally known as the Joint Comprehensive Plan of Action), claiming that it was she who led the way in imposing “crippling sanctions” that brought Tehran to the table. In fact, she and her administration colleagues resisted the imposition of additional sanctions until they were virtually forced by the Congress to accept them. She repeated the president’s flawed argument that the only choices available were either war or consummation of the deal with Tehran. She deftly glossed over the fact that the administration’s self-imposed deadline gave Iran the upper hand in the negotiation, however, which led among other things, to the absence of any constraints upon Iran’s development of long-range missiles capable of delivering nuclear or other weapons throughout the Middle East and beyond. Her promise to “distrust but verify” and to employ military action in response to Iranian violations of the agreement rings hollow in light of her silence in the face of the administration’s current efforts to enable European business to evade American sanctions.

Clinton had nothing to say about the Libya fiasco—what could she say?—nor about her inability to bring about any movement in the moribund Israeli-Palestinian “peace process.” She did talk tough when it came to ISIS, arguing that America needs to “take out” its strongholds in Syria and Iraq by intensifying the air campaign and supporting Arab and Kurdish forces on the ground. She was silent regarding the 2012 Obama “red line” speech, which the president delivered while she was still serving as Secretary of State.  And while it is true, as Clinton asserted, that she was in the Situation Room watching the SEALS eliminate Bin Laden, it was not she who made the decision to do so. She was a privileged spectator; nothing more.

Clinton also was silent regarding her views on trade, though she was quick to bash Trump for his readiness to ignite a trade war with China. In fact, while her tone might be less inflammatory than her soon-to-be Republican rival for the presidency, in practice, it is not much different. Having once supported the NAFTA agreement, as well as the Trans-Pacific Partnership, she now claims that she regrets both decisions. Opposition to free trade is the canary in the coal mine of neoisolationism; and Clinton therefore may simply be a half-step behind Trump’s “Fortress America.”

Clinton has nevertheless become the darling of the neocons. This should come as no surprise, since their views on national security matters were never far from the liberal interventionism she espoused while Secretary of State, while most neoconservatives are quite liberal on domestic issues. In fact, one of the archdeacons of neoconservatism, Reuel Marc Gerecht, told National Public Radio that both he and the other hundred or so Republican signers of the open letter attacking Trump’s national-security policy were now Clinton supporters.

Gerecht and several others who signed that letter may indeed now align themselves with Clinton. But not all. Some of those who signed the letter may well vote for the Libertarian candidate; others may write in a name; still others may simply skip the presidential line and vote the Republican down-ticket; and, should Trump backtrack from his zanier positions, some might bring themselves to vote for him. Many, like this writer, simply have not made up their minds what course they will take. But one thing is for certain: under no circumstances will they cast their vote for Hillary Clinton.