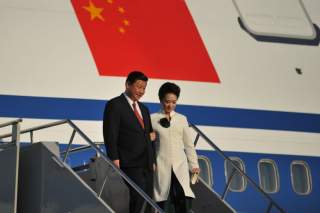 The United States needs to fundamentally change its grand strategy toward China.

One need look no further than the recent Asian Infrastructure Investment Bank (AIIB) debacle to understand how China’s ascent is aimed at challenging American global reach. The China-led international financial institution is poised to undermine the influence of the U.S.-led World Bank and International Monetary Fund while institutionalizing China’s geoeconomic coercion in the Asia-Pacific. Italy, France, Britain, Germany, South Korea, Denmark, and Australia have signed on as members of the AIIB, with Thailand and even Taiwan eyeing imminent entry. Meanwhile, the U.S. remains on the outside looking in as its influence is directly challenged by China’s rise.

Along with the AIIB, China is also pursuing a number of additional initiatives to expand its strategic reach in Asia and beyond. China has announced plans to advance a Free Trade Area of the Asia Pacific (FTAAP) and Regional Comprehensive Economic Partnership (RCEP)—trade agreements that link the economies of China, Japan, and India along with Southeast Asian countries.

Beijing is simultaneously promoting the creation of a New Silk Road, which would open trade routes through Central Asia and maritime routes around Southeast and South Asia, better connecting China geopolitically to growing Asian economies and, through them, to the Middle East and Europe. Add to these projects the ongoing discussions over the creation of a new BRICS Development Bank between Brazil, Russia, India, China and South Africa.

China’s sustained economic success over the last thirty-odd years has enabled it to aggregate formidable power, making it the nation most capable of dominating the Asian continent. Beijing’s economic rise has been staggering; its economy has grown at 10 percent annually for 35 years, and overall gross domestic product (GDP) has exploded from just $147 billion in 1979 to $9.24 trillion in 2013.

The meteoric growth of the Chinese economy, even if PRC per capita income remains behind that of the United States, has already provided Beijing with the resources necessary to challenge the security of both its Asian neighbors and Washington’s influence in Asia, with potentially dangerous consequences. Even as China’s overall GDP growth slows considerably, its relative growth rates are likely to be higher than those of the United States for the foreseeable future.

Backed by this robust economy, Beijing has embarked on a concerted modernization of the People’s Liberation Army (PLA) with the intention to amass military power capable of both defeating local adversaries and deterring the United States from coming to their defense in a crisis. China’s military budget, which was just $10 billion in 1997, saw an average annual increase of 15.9 percent between 1998 and 2007.
This year, China has announced that it will increase its defense budget by 10.1 percent, or roughly $145 billion in military spending. That total, however, doesn’t tell the full story; when weapons imports, military research and development, and spending on PLA strategic forces are included, China’s military spending could see an increase of 40 to 55 percent from last year. China’s emerging military capabilities enhance its ability to project power in the Asia-Pacific with the goal of limiting U.S. access to the region.

China’s grand strategy toward the United States is clear: to replace the United States as the primary strategic actor in Asia; to weaken the U.S. alliance system in the region; to undermine the confidence of Asian nations in U.S. credibility, reliability, and staying power; to use China’s economic power to pull Asian nations closer to Beijing’s geopolitical policy preferences; to increase Chinese military capability to strengthen deterrence against U.S. military intervention; to cast doubt on the U.S. economic model; to ensure American democratic values do not diminish the Chinese Communist Party’s hold on domestic power; and to avoid a major confrontation with the United States in the next decade.

In a classic work published at the height of the Second World War, Makers of Modern Strategy: Military Thought from Machiavelli to Hitler, editor Edward Meade Earle defined grand strategy as “the art of controlling and utilizing the resources of a nation…to the end that its vital interests shall be effectively promoted and secured against enemies, actual, potential, or merely presumed.”

For the United States, grand strategy has long focused on acquiring and maintaining preeminent power over various rivals. In the face of a rising China, however, the United States has failed to apply this centuries long approach to its national security.

Instead, a gamut of policy options and rhetoric has emerged for Washington policymakers to employ when it comes to dealing with China. There’s talk of a Group of Two (G2) relationship between Washington and Beijing, of encouraging China to become a “responsible stakeholder,” and—most recently—the emergence in Beijing of the concept of “a new type of great power relations.”

None of these policy alternatives are adequate to reinforce what should be the main thrust of U.S. grand strategy toward China in the 21st century—to maintain American strategic primacy in Asia. Thus, Washington urgently needs a new set of actions in the region that centers on balancing the rise of Chinese power rather than continuing to assist its ascendancy.

A new U.S. grand strategy toward China cannot be built on a bedrock of containment, as the previous effort to limit Soviet power had been, because of the realities of globalization. Nor can it involve abruptly jettisoning the long time U.S. effort of integrating China into the international system. Rather, it must involve crucial changes to current Washington policies in order to limit the dangers that China’s geoeconomic, military and diplomatic expansion pose to U.S. national interests in Asia and globally.

The United States needs to focus its policy on five distinct objectives: revitalizing the American economy to sustain asymmetric economic advantages; creating new preferential trading arrangements among U.S. friends that consciously exclude China; recreating a technology-control regime with U.S. allies to prevent China from acquiring advanced military and strategic capabilities; concertedly building up the capacities of U.S. allies and friends on China’s periphery; and improving the capability of U.S. military forces to effectively project power in the Asia-Pacific region. All of these objectives must be accomplished while continuing to work with China in the diverse ways that are consistent with U.S. national interests.

Of all nations—and in most conceivable scenarios—China is and will remain the most significant competitor to the United States for decades to come. China’s rise is producing increased geopolitical, military, economic and ideological challenges to U.S. power projection, to America’s Asian allies and friends, and to the U.S.-led international order.

Washington’s current approach toward Beijing, one that favors China’s economic and political integration into the liberal international system at the expense of the United States’ global preeminence and Asian primacy, is weakening U.S. influence throughout Asia and beyond.

Robert D. Blackwill is Henry A. Kissinger Senior Fellow for U.S. Foreign Policy at the Council on Foreign Relations. Ashley J. Tellis is Senior Associate in the South Asia Program at the Carnegie Endowment for International Peace. They are co-authors of a new Council on Foreign Relations report, “Revising U.S. Grand Strategy Toward China,” available online at CFR.org.