Wake Up, America: China Is a Real Threat 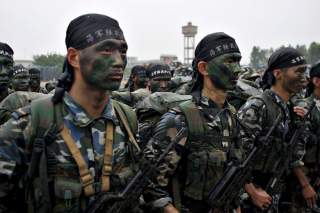 Between complacency and confrontation there is a responsible way forward that keeps the Asia-Pacific a big enough place to accommodate the vital interests of both Beijing and Washington. The heavy lifting will have to be done by the United States. That's okay. The work will make America a stronger nation and a better Asian ally.

In the last decade, the Chinese regime has shown itself to be anti-democratic, no friend of free markets, a first-class cyber bully and more interested in rewriting or ignoring international norms than in respecting them. Left unchecked, the Beijing method of managing international relations is not likely to make the world a better or safer place.

If America didn't share the same neighborhood with China, it might well ignore Beijing's behavior and let others deal with it. But China and the United States are stuck with each other.

Unfortunately, the current U.S. China policy isn't working. That’s why China thinks its U.S. policy is working—and Beijing's goal is to diminish and marginalize Washington's influence in the Asia-Pacific.

There is a diplomatic dimension to righting the relationship, but it requires the United States to work in a more synchronized manner with key nations that have the most to lose if China's bullying doesn't stop. Those nations are India, Australia and Japan.

There also has to be a military component to the U.S. approach. America won't be respected in the region if its armed forces aren't adequate to protect U.S. vital interests—namely ensuring freedom of the commons (air, sea and cyberspace) and deterring major regional conflicts (without relying exclusively on nuclear weapons).

But there is more on the U.S. to-do list.

Diplomatic and military initiatives are needed to respond to the threats engendered by Chinese behavior. But that same ham-fisted behavior has created opportunities for the United States.

To make the most of those opportunities, the United States will need to power up two additional elements of national power: economic power and public engagement. Ramping these up ought to be easy lifts and joyful tasks. They will not only check China, they will help build a strong and more resilient America, as well as improve the lot of our friends and allies in Asia.

Chinese behavior is increasingly rubbing raw Beijing's ties with countries that share more in common with the United States. The United States doesn't have to come close to matching China dollar-for-dollar in spending on university centers, television networks and traveling delegations. China has created enormous opportunities to counter its own efforts. Even as China dumps more and more money into its public diplomacy and outreach programs, its bullying ways are undercutting the Beijing brand name. All the United States has to do is take advantage of that.

Everywhere the Chinese go, the Americans should show up and say, "Wait a minute, here is another side to the story."

Rather than muddy the differences between what Beijing wants and where America stands, the United States should give its friends and allies a clear choice of visions for the future. Asia-Pacific nations will make their own choices and chart their own destinies. The United States needs to cover the bet that, given a choice, more will break our way.

America also needs a serious case of real economic growth. This is best accomplished by expanding economic freedom at home and abroad. Beijing was too ready to take the American recession as a sign that America's inevitable decline had begun and it was time for China to start taking over.

The 2015 “Index of Economic Freedom” shows that, after seven years of continuous decline, economic freedom in the United States has pulled out of its tailspin. In part, the American energy renaissance has helped. Politics helped, too. When the House flipped, Congress didn't accomplish much, but it did slow roll President Obama’s agenda of higher taxes, deficit-spending and more government programs.

If the U.S. economy really took off, it would be a true setback for China. Trade deals that actually promoted free trade and liberalizing markets would help make it so, as would tax reform, a free-market energy policy and trimming back the mind-numbing regulatory burden that Mr. Obama has been wrapping around the economy.

Meanwhile, China continues to steadily lose economic freedom. It has overinvested at home and abroad, and many of those investments are now looking decidedly unsound.

The double shock of a resurgent, self-confident American voice and an American tiger economy, paired with a more proactive regional diplomacy and a renaissance of American military power would have Beijing rethinking about whether all its bluster over the last year has left the regime better or worse off than when it started.

In the end, China may still be China. But that might not matter as much as it does now if a resurgent America pulls all the levers at its disposal to advance the prospects for freedom, prosperity and peace in the Asia-Pacific.