Walter Jones: The Future of the Republican Party? 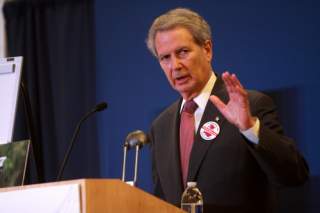 Normally, it is unremarkable when a twenty-year incumbent wins a primary. Even in an era of low congressional approval ratings, incumbent re-election rates for the House still routinely top 90 percent.

But what Walter Jones did Tuesday in North Carolina’s third congressional district is worth a bit more attention than Clay Aiken’s campaign, with all due respect to the former “American Idol” star. The ten-term Republican famously transformed from the man behind the anti-French “freedom fries” crusade into one of the most passionate opponents of the Iraq war in Congress.

Jones went on to oppose future proposed military interventions in Libya and Syria; support strategic withdrawal from Afghanistan; contemplate cuts in the Pentagon budget; push for greater oversight of National Security Agency surveillance; vote against extensions of the Patriot Act.

Moreover, he has done all of this while representing a Southern conservative congressional district that is home to two military bases, including Camp Lejeune, which houses some 40,000 Marines. Jones’ own congressional website notes, “In total, the installation surrounding community is home to an active duty, dependent, retiree and civilian employee population of approximately 180,000 people.”

If a principled critic of foreign military adventurism can survive politically in this district, it opens possibilities for Republicans skeptical of the neoconservative approach everywhere. Jones has managed to still be seen as a steadfast friend of the military and remains a committed social conservative.

But Jones has certainly taken heat for his antiwar stands. Outside groups poured $1 million into the effort to unseat him, with money coming from casino mogul Sheldon Adelson and TD Ameritrade’s Joe Ricketts.

“Once upon a time, Walter Jones was right for North Carolina but he’s changed,” intoned the narrator in a six-figure ad campaign by the Emergency Committee for Israel. “Isn’t it time your vote changed as well?” Jones fired back an endorsement from Jesse Helms’ widow, subtly zinging his main opponent—Taylor Griffin, veteran of K Street and George W. Bush’s White House—as a “Washington insider.”

The congressman’s Republican detractors found isolated votes on domestic policy issues—sugar subsidies, questionable appropriations bills—and highlighted his militancy against the Bush administration once he turned against the war. It was nevertheless obvious foreign policy was the main reason Jones found himself in the crosshairs after two decades.

Yet Griffin, like Justin Amash’s primary opponent, was reluctant to support warrantless surveillance or drones. His supporters characterized Jones as “anti-Israel” and a “liberal” but were much less heavy-handed about their own candidate’s views.

Jones’ ability to overcome his opponents’ collective war chest, well publicized slurs against his record, and a Sarah Palin endorsement of Griffin, sends a message to other Southern Republicans who might be as skeptical about military interventions as they are about government interventions in the American economy. A few of them, ranging from Mark Sanford in South Carolina to Thomas Massie in Kentucky, do exist.

The news is not all good for those who would like to see a less hawkish wing of the GOP prosper, however. Jones bested his last serious primary opponent by nearly twenty points in 2008, when the Bush Doctrine was still firmly ensconced as the Republican way of war. But because he was running in a political climate where Republicans could ill afford to jeopardize any more House seats, that challenger was woefully underfunded.

While Jones held off Griffin by 51 percent to 45 percent, that much smaller margin may embolden his opponents to try again—and spend even more money—next time. Perhaps 2016 will once again be a year where Republicans must scramble to protect congressional seats and raise campaign cash, making challenges to incumbents a lower priority. But Sheldon Adelson, having bankrolled Newt Gingrich’s presidential campaign long after it was hopeless, may not care.

In other races, more hawkish Republicans did just fine. Greg Brannon, the Republican candidate for U.S. Senate in North Carolina closest to Jones on foreign policy, failed to force establishment-backed Thom Tillis into a runoff. All Brannon needed to do was hold Tillis to less than 40 percent of the vote.

Nevertheless, Jones has now won five Republican primaries since adopting foreign-policy views that were once verboten in the party, overcoming two credible challengers in that time. He has done so in a district that would, in theory, seem more sympathetic to “freedom fries” than Ron Paul, keeping his conservative credentials mostly intact.

No one knows what the future will bring, especially in such a volatile political climate. But this much is clear: Walter Jones has taken the neocons’ best shot and is still standing.