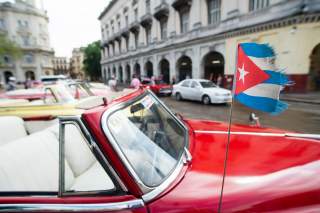 As the Trump administration carries out its promised review of U.S. policy toward Cuba, it should think hard about the national and economic security implications of its next move. Three apparent courses of action—rolling back engagement and increasing punitive sanctions, continuing with normalization, or conditioning improved relations on further changes in Cuba—have distinct ramifications for the White House’s stated priorities to improve border security and generate jobs at home.

The chosen strategy will also influence to what extent rivals like China and Russia move further and faster to cement ties with Havana, at America’s expense. If this occurs, like-minded allies from Europe and Latin America could become preferred partners instead. Most importantly, Washington’s approach will directly affect the ability of Cuba's eleven million citizens to fulfill their aspirations to live normal, prosperous and freer lives, in harmony with the two million Cubans living in the United States.

Let’s start with the longstanding premise, baked into the current U.S. congressional embargo, of forcing the Castro regime to crumble in favor of a democratically elected government with a free market economy. As President Barack Obama stated, it does not serve America’s interests, or the Cuban people, to try to push Cuba toward collapse. Even if that worked—and it hasn’t for fifty years—we know from hard-earned experience that countries are more likely to enjoy lasting transformation if their people are not subjected to chaos.

President Trump implicitly endorsed this principle when he told Congress in February that “we will respect the sovereign rights of nations . . . to chart their own path.”

While the Cuban people are certainly entitled to exercise their rights to govern themselves freely, regime collapse could spark civil conflict. Strife in Cuba would prompt thousands of civilians to flee north and would open the doors to criminal elements to smuggle people and drugs into the United States. Yet emotional pro-embargo voices in Congress, and some now entering the administration, continue to push for tightening the embargo unless the Castro government surrenders within ninety days. As Obama noted, U.S. policy has failed to achieve this feat for over fifty years. Even if one buys this argument, the price tag for rebuilding Cuba—which is already struggling to feed its people and pay them a decent wage—would fall largely on the American taxpayers at the expense of  nation-buildings priorities at home.

A severe tightening of the unilateral U.S. embargo against Cuba, a state which the former leader of U.S. Southern Command, Gen. John Kelly, told Congress poses no direct national security threat to the United States, would also further encourage Cuba to turn to countries like Russia, China, North Korea and Iran for help.

In addition to these national security risks, tightening the embargo would inevitably lead to retaliation from Cuba. This might include a shutdown of commercial exchanges that have directly benefited the U.S. travel industry, to the tune of $952 million in lost revenue and thousands of good-paying jobs for Americans disappearing, especially in Florida. Increased repression and civil strife on the island would raise pressure to reopen migration to any Cubans who make it to U.S. shores regardless of refugee status, a policy that President Obama ended shortly before leaving office. This policy would cost taxpayers an additional $2.45 billion over ten years in federal and state benefits, according to the Congressional Budget Office.

The second scenario—allowing the recent renewal of diplomatic relations to take root—would give the United States meaningful opportunities to build a constructive relationship with the post-Castro leadership set to assume power in February 2018. It would offer the best chance of achieving important security goals, like the returning fugitives for prosecution in the United States and the dispatching Cuban criminals back to the island. It would foster cooperation with Cuba’s public health system, which has a proven record of containing the spread of Zika and other infectious diseases, which in turn improves our health security. And it would help Washington to secure additional bilateral cooperation agreements in areas ranging from disaster relief and biomedical research to counter-narcotics and law enforcement.

Continued engagement with Cuba would also give its emerging private sector the best chance of expanding its role in the island's political economy. These entrepreneurs largely depend on the growing influx of American travelers spending money at privately run bed and breakfasts, taxis and restaurants. It is critical, therefore, that both sides maximize ease of travel so that American citizens can continue serving as goodwill ambassadors and facilitate the flow of information, ideas and commerce. If Congress finally agrees to let U.S. companies extend private credit for food sales to Cuba, it would unlock the potential of nearly $1 billion in U.S. agricultural and other exports from farms in Kansas, Arkansas and Louisiana.

Given the promises made by President Donald Trump and Vice President Mike Pence shortly before the elections to roll back the last administration's steps to liberalize the embargo—and the incessant demands from embargo hardliners like Sens. Marco Rubio and Bob Menendez—this status quo scenario is unlikely to unfold in the short term. But it does suggest a third option. The United States could continue normalization in the areas of greatest security and economic interest while linking further progress toward lifting the embargo on a series of negotiated steps to improve cooperation and advance Cuba’s own reforms.

What are realistic targets for progress? They should include accelerating negotiations toward settlement of outstanding property claims, whether in a package deal or segregated between individual and corporate claims; fast tracking the return of fugitives; releasing political prisoners; adopting of new laws on small and medium enterprises; permitting direct commercial trade relations with Cuba’s private farmers and entrepreneurs; and allowing more freedom for Cuban civil society, religious groups and independent journalists to join the ongoing debate about what the island’s post-Castro future will look like.

The manner in which these linkages might be conveyed, however, is of utmost importance. If the Trump administration decides to issue direct public threats of regime change to Havana, it will strengthen the hand of anti-reform hardliners in Cuba and the region at large. It would also directly undermine U.S. national security and economic interests in a more stable and prosperous Cuba. If, however, the White House follows a quiet diplomatic approach through its special negotiator for Cuba, Jason Greenblatt, it could create a healthy rhythm of parallel steps that would be well-received by Congress and the vast majority of American citizens who favor lifting the embargo.

Now is the time for quiet diplomacy with the post-Castro Cuba of tomorrow. The table has been set for further progress that will directly benefit U.S. border and economic security.

Ted Piccone is a senior fellow at the Brookings Institution’s Project on International Order and Strategy.

Image: A taxi sits in a Cuban parking lot. Pixabay