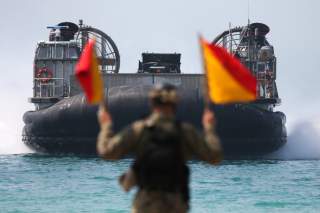 The U.S. Marines and their MEUs won't be only show in town for much longer. Within a few years the Chinese People’s Liberation Army (PLA) may have its own MEU operating in East Asia and into the Indian Ocean. Not too long after that, a second one. And given the speed at which PRC does things, maybe a third.

What is the United States to do then? Keep scraping together MEUs? Not likely, and especially not with amphibious ships costing $1-2 billion a piece. And what if the PLA implements its own version of a “permanent presence” scheme? The right Chinese officers using flattery, unlimited money and a Chinese MEU can builda lot of influence—despite the Marine Corps’ ninety years plus of amphibious experience and being the world’s experts.

This, of course, needs to be a joint U.S. Marine / US Navy effort—as without both there is no amphibious force. But this article focus on the marines since I’ve found the Navy in Asia willing to help whenever the Marines show some initiative. The Navy’s usual response: “What took you so long?”

This article overturns received wisdom and rice bowls.  That’s unfortunate, but one wishes there was more to show after fifty years of Marine/Navy effort in Asia.

Not everyone will agree. But one mustn’t mistake people liking marines (who doesn’t?) and being busy (who isn’t?) for being successful. And arguing “we still get access” as an excuse for stunted regional amphibious forces after fifty years doesn’t go very far. “Access” is easy—as long as America shows it’s still interested in Asia.

An additional MEU or two is overdue and welcome. And with some imagination and a little effort—and a half dozen officers—the Marines can achieve more—even having a strategic effect. But if the new MEUs are just another version of the Globetrotters, the Marine commandant should change his name to Meadowlark Lemon—the most famous Globetrotter of all time.

Grant Newsham is a Senior Research Fellow with the Japan Forum for Strategic Studies in Tokyo. He is a retired U.S. Marine Officer and was the first USMC liaison officer to the Japan Self Defense Force. He played a role in bringing about Japan's amphibious capability, and has also been involved in other regional amphibious development efforts.

Image: An U.S. marine directs a hovercraft onto the beach as they participate in an amphibious assault exercise as part of the "Cobra Gold 2018" (CG18) joint military exercise at a military base in Chonburi province, Thailand, February 16, 2018. REUTERS/Athit Perawongmetha​