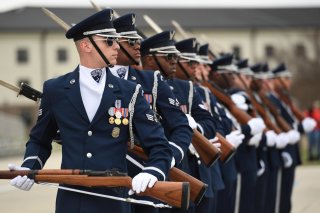 The Pentagon’s rosters are tens of thousands of troops short, as the department battles the worst recruiting crisis since the draft ended in 1973. Criminal records, drug use, and poor health bar three out of four Americans from serving without a waiver, while a booming civilian jobs market entices many of the rest. In response, the Pentagon ought to tap the largest pool of available talent: foreigners.

No self-respecting country should rely entirely on foreign troops. But enlisting some quickly fills the ranks with quality personnel. The British Army has long turned to Gurkhas, Fijians, and others from the Commonwealth, in part to make up for recruiting shortfalls. The Spanish Legion recruits from Hispanic countries and the French Foreign Legion from the world over.

Washington once grasped the sense of recruiting abroad. The Navy enlisted tens of thousands of Filipinos from 1900 to 1992, well past Philippine independence. They viewed the service as a way out of poverty and competed fiercely to join it. In the program’s last decade, as many as 100,000 Filipinos applied yearly for the 400 slots available—an acceptance rate ten times lower than Harvard’s.

Successful candidates were more educated and fitter than the average sailor, eleven times less likely to ditch the uniform after their first enlistment, and more quickly promoted. Some served at the White House. One, who earned the Medal of Honor in 1915, will give his name to the future destroyer USS Telesforo Trinidad.

This program ended in 1992 when America’s basing agreement with the Philippines expired and the Cold War petered out. The decision, sensible amid peacetime downsizing, is indefensible during today’s recruiting crisis.

All the more so because the program was savvy foreign policy too. It forged lasting bonds between Americans and Filipinos, burnished the United States’ image as a land of opportunity, and boosted the Filipino economy. It stood, in the words of one Chief of Naval Operations, for “a continuation of a traditional relationship.” The United Kingdom likewise ascribes its friendships with Nepal and Fiji to a shared military history.

Recruiting in the Pacific would help America compete with China. The White House plans to open embassies in Tonga and Kiribati, send an envoy to the Pacific Island Forum, treble aid for maritime resilience, and redeploy the Peace Corps to Fiji, Tonga, Samoa, and Vanuatu. Rightly so. But America’s outreach should also ease the armed forces’ manpower crisis. After all, what better way of drawing countries away from China than by putting their youths in American uniforms?

A start would be to recruit in the Philippines, where President Ferdinand Marcos Jr. wants to bolster defense ties with the United States. There are 115,000,000 Filipinos, most are under twenty-five, and many would race to enlist as their ancestors did.

Programs in other Pacific states should follow. What the likes of Tonga, Kiribati, and Papua New Guinea lack in population, they make up for in strategic value. Eager to leave their islands and provide for their families, locals would eagerly join up. That is why eligible Pacific islanders already enlist at record rates. The Army’s recruiting station in American Samoa (population 49,710) outperforms all others. In Palau, one of three countries whose compacts of free association with America allow their citizens to enlist, rates of service are higher than in any state or territory.

There are few easy fixes to the recruiting crisis. Reducing obesity takes time. Lowering standards hurts discipline and performance. Bonuses are not cheap. By contrast, enlisting allied citizens is a win-win solution. Given a chance to address a serious recruiting crisis while strengthening alliances, the Pentagon should take it.

Arshan Barzani is an officer in the Army Reserve and a student at Yale Law School. He has written for the Wall Street Journal and Lawfare. He is also the author of Chronicles of Caesar’s Wars, the first translation of Napoleon’s history of Julius Caesar. He received a BSFS from Georgetown and an MSc from St. Antony’s College, Oxford.