Want to Wreck the Trump-Xi Bromance? Sell F-35s to Taiwan. 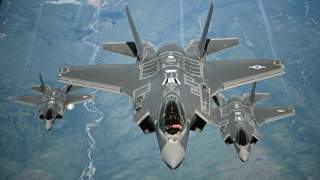 Everything came up roses during the summit meeting between President Trump and Chinese Leader Xi Jinping at Mar-a-Lago in early April. Previous condemnation of China as “a currency manipulator” and “job stealer” evaporated as the leaders of the world’s two largest economies agreed on a “100-day trade plan” to increase U.S. exports to China and shrink America’s enormous trade deficit. Singapore’s Strait Times quoted President Trump as stating “the relationship developed by President Xi and myself, I think, is outstanding.” Trump had further noted that he informed Xi over dessert at a summit dinner of the U.S. missile strike on a Syrian air base.

However, the president’s granddaughter, Arabella, age five, restored a feeling of conviviality before the summit concluded with a rendition in Mandarin of the Chinese folk song “Mo Li Hua” (Jasmine Flower), which she learned from her Chinese nanny. This personal touch was certain to have pleased Xi and especially his spouse, Madame Peng Liyuan, who reportedly sang the same song herself during her career as a vocal artist.

The two leaders also reportedly discussed the growing crisis over North Korea’s nuclear development. Bill Gertz noted in the Washington Times that “both leaders exchanged views on their assessment of the problem, but ‘there was mutual agreement the problem has become more urgent,’ a senior administration official tells Inside the Ring.” And a follow-up White House statement on April 24 noted that President Trump and his Chinese counterpart vowed to “strengthen coordination” to achieve the denuclearization of the Korean Peninsula, according to USA Today. The statement followed a late April phone call between the two leaders.

North Korea also served to underscore the urgency of the matter by firing yet one more missile just before the Trump/Xi summit. The BBC reported on April 5 that “North Korea has test-fired a medium-range ballistic missile from its eastern port of Sinpo into the Sea of Japan. South Korea’s defense ministry said the missile flew about 60 km (40 miles) . . . The launch comes on the eve of a visit by China’s President Xi Jinping to the US to meet President Donald Trump.”

President Xi reportedly gave President Trump a miniature history lesson on the importance of Sino-Korean relations. President Trump’s takeaway from the discussion, according to an April 12 interview with the Wall Street Journal, was that “Korea actually used to be a part of China,” a statement that caused heartburn in Seoul. This only added to the jitters of a South Korean ally convinced that, with a political transition taking place in South Korea, including a presidential impeachment and a heated election campaign, that there has been a “Korea passing.” The Korea Times editorial went on to note that “concerns over Korea's diplomatic isolation are mounting after U.S. President Donald Trump assumed office in January. Before his meeting with Chinese President Xi Jinping, Trump talked on the phone with Japanese Prime Minister Shinzo Abe for thirty-five minutes and discussed Pyongyang's ballistic missile test from its eastern port of Sinpo. But there was no phone conversation with acting Korean President Hwang Kyo-ahn . . . Even though there is no president in Korea at the moment after Park Geun-hye was removed from office last month, Trump should have communicated with the acting president over security issues on the Korean Peninsula.”

President Trump created further alliance anxiety in Seoul when he told Reuters that he expected to “either renegotiate or terminate a ‘horrible’ trade deal with South Korea (KORUS FTA)” and that he “wants South Korea to pay for the $1 billion THAAD missile defense system,” the deployment of which has already led to Chinese economic retaliation against South Korean companies. South Korea’s Yonhap News Agency reported on March 24 that House Asia and the Pacific Subcommittee Chairman Ted Yoho had introduced a bipartisan-sponsored resolution (H. Res. 223) “condemning China’s retaliation against South Korea for its decision to host the U.S. THAAD missile defense system and urging Beijing to exercise pressure on North Korea. . . . China’s retaliatory measures against South Korea potentially constitute a violation of its World Trade Organization obligations.”

While China has now become the center of the Trump administration’s diplomacy on the Korean Peninsula, Beijing’s ultimate resolve in seeking to rein in the petulant Kim Jong-un and his nuclear adventurism remains open to question. The website NK News carried a post Xi-Trump summit report of “four N. Korean ships, three with troubled pasts, allowed into Chinese coal port” despite Beijing’s earlier pledge to cut off coal imports from Pyongyang for the rest of 2017. Coal remains North Korea’s main legitimate export. President Trump himself has taken note of the pledged coal import ban, calling Beijing’s action “a big step” towards cracking down on the rogue state, according to CNN.

CNN further reported that a Chinese Foreign Ministry spokesperson, with Beijing caught with its proverbial hand in the cookie jar on the coal issue, issued the following statement on April 23: “There have been some reports that some coal ships have tied up in port. You are aware if these ships continue to remain out at sea, away from port, we need to make some humanitarian consideration for their crews.” The spokesperson added that “nothing that violates the implementation” of sanctions had occurred.

Subsequent to that, on April 27, ITV carried a report titled “Coal train seen travelling between North Korea and China could be breaching embargo.” The reporter noted that “all we can state is that in the early hours of Thursday morning we saw a coal train coming across from North Korea into China. The train was not turned back by those manning the checkpoint as it would have been easy to do.”

North Korean coal, however, may prove of secondary importance compared to another looming issue which could throw a wrench in the works of blossoming Sino-American cooperation. That is the issue of Taiwan, which was raised again during the recent thirty-eighth anniversary of the passage of the Taiwan Relations Act (TRA). The chairmen of both the House and Senate Taiwan Caucuses sent President Trump letters not only to commemorate the April 10 anniversary but also to note the continued “vital partnership with Taiwan” in light of the summit with Xi Jinping.

The TRA, of course, stipulates that the United States “provide Taiwan with arms of a defensive character.” The Republican Congress was critical of the former Obama administration for being what it perceived as rather anemic on the Taiwan arms sales question, apparently so as not to unduly provoke Beijing. Reuters had carried a pre-summit March 17 report, stating that “the Trump administration is crafting a big new arms package for Taiwan that could include advanced rocket systems and anti-ship missiles to defend against China, U.S. officials said, a deal sure to anger Beijing. The package is expected to be significantly larger than one that was shelved at the end of the Obama administration.”

Additionally, the South China Morning Post reported that “China’s first domestically built aircraft carrier was launched on Wednesday (April 26) in the latest display of Beijing’s growing naval power. The carrier was released into open water from a shipyard in the port of Dalian, northeastern Liaoning province, on Wednesday morning as a bottle of champagne was popped and the national anthem played in the background.” Such a demonstration of increased Chinese maritime might should only increase Congressional concerns about the growing Cross-Strait arms gap and the urgent necessity for Taiwan to have sufficient defensive arms, including updated diesel-electric submarines and F-35 fighters, as Taiwan has requested.

In the absence of backtracking by the Trump administration, the Taiwan arms sales issue will certainly throw cold water on the new rapprochement with Beijing on North Korea and, potentially, trade issues. Xi Jinping has been more forceful in his assertions on the Taiwan question than a number of his predecessors. Xi, known for using a favorite phrase of “brandishing the sword,” has moved up the timetable for political talks with Taipei on Beijing’s “great goal of national unification.” While Chairman Mao once told Henry Kissinger that China could “wait 100 years” for Taiwan, Xi warned otherwise in a 2013 meeting with a former Taiwanese vice president. “The issue of the political divide that exists between the two sides (China and Taiwan) must step by step reach a final resolution and it cannot be passed on from generation to generation,” he stated, according to a report in the South China Morning Post.

Based on past experience, there will be a fiery reaction from China if and when the Trump administration announces a new Taiwan arms sales package. And past precedent indicates that Beijing will then severely restrict dialogue with Washington to send a clear signal of its displeasure. That will likely include no discussions on North Korea. So the Trump administration may find North Korean coal in its Christmas stocking from China if it approves defensive arms for Taiwan.

That will clearly indicate that the honeymoon is over.