Wanted: A Coalition of 'Disinterested Powers' Capable of Saving Syria 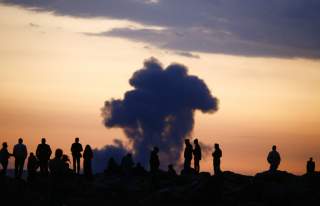 Lyle J. Goldstein is professor of strategy in the China Maritime Studies Institute at the United States Naval War College in Newport, Rhode Island. He is also an affiliate of the new Russia Maritime Studies Institute at NWC. You can reach him at [email protected]. The opinions in his columns are entirely his own and do not reflect the official assessments of the U.S. Navy or any other agency of the U.S. government.

Image: Turkish Kurds watch the smoke rises from Syrian town of Kobani near the Mursitpinar border crossing, on the Turkish-Syrian border in the southeastern town of Suruc in Sanliurfa province, October 18, 2014. A U.S.-led military coalition has been bombing Islamic State fighters who hold a large swathe of territory in both Iraq and Syria, two countries involved in complex multi-sided civil wars in which nearly every country in the Middle East has a stake.. REUTERS/Kai Pfaffenbach