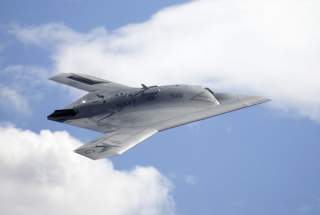 In a widely publicized speech at the Reagan National Defense Forum last month, Defense Secretary Chuck Hagel announced a new Pentagon initiative aimed at fostering a third “game-changing” Offset Strategy. Modeled off of Eisenhower’s New Look doctrine in the 1950s, and the Offset Strategy of the 1970s and 1980s, the Third Offset Strategy seeks to harness technological innovations to preserve America’s military primacy in the future.

Despite the grand rollout, much of the details of the Third Offset Strategy remains to be fleshed out. With this in mind, the House Armed Services’ Subcommittee on Seapower and Projection Forces held the first of what its chairman, Rep. Randy Forbes (R-VA), promised would be many hearings on the new strategy. Entitled “The Role of Maritime and Air Power in the Third Offset Strategy,” the hearing featured testimony from four prominent defense think tankers with previous Pentagon experience.

(What You May Like: 5 Chinese Weapons of War America Should Fear)

One of the more important debates that emerged among the witnesses concerned whether the Third Offset Strategy should focus on all the challenges the Pentagon deals with, or else more narrowly on a few of the most important threats it faces-- such as anti-access/area-denial (A2/AD).

On one side of this debate was Andrew Hunter, who is now at the Center for Strategic and International Studies after recently leaving Pentagon where he served as Ash Carter's chief of staff, among other positions. Hunter argued that the Third Offset Strategy “must be integrated in a broader national strategy” and focused on all the issue areas outlined in key defense strategy documents like the QDR and Defense Strategic Guidance.

“To address a mission set this diverse,” Hunter said, “the next offset strategy will have to focus on capabilities with a broad array of applications, from the high end to the low end of conflict. I believe there is a real danger of over specifying the problem particularly if you are specifying it at one end of the spectrum solely.”

(What You May Like: 5 Russian Weapons of War NATO Should Fear)

“It is my view that the next offset strategy should consist of a set of targeted capabilities that enable new operational concepts and be paired with a technology investment roadmap. I don’t believe that the next offset strategy should be a list of platform-specific investments,” Hunter said. One danger of focusing on platforms versus capabilities, Hunter said later in the hearing, was that it would encourage and intensify bureaucratic infighting within the military and especially between the services. If the offset strategy only identifies necessary capabilities, then the services would have the chance to make the case that they can offer superior platforms for acquiring that capability. This latter task, however, should be part of the budget process, not part of the strategy formulation period, Hunter said.

(What You May Like: The 5 Best Submarines of All Time)

Others disagreed, however, including Robert Martinage, a senior fellow at the Center for Strategic and Budgetary Assessments (CSBA) where he published an influential report on Offset Strategies back in October. Although Martinage has elsewhere discussed the need to maintain a balanced mix of capabilities, he told the committee on Wednesday that the Third Offset Strategy “is not a comprehensive national defense strategy let alone a national security strategy. It does not address every threat facing the nation, but rather should focus more narrowly on restoring and sustaining our conventional power projection capability and capacity, which is the sine qua non of a superpower and the bedrock of deterrence.”

He has a point. The two previous Offset Strategies were designed to overcome a very specific challenge: namely, the Soviet Union’s conventional superiority in Europe during the Cold War, which was undergirded by the massive number of men it kept under arms.

(What You May Like: Will the F-35 Dominate the Skies?)

At neither time was the conventional military balance in Europe the only national security challenge the United States faced. Indeed, among the many challenges of the 1970s, the U.S. was increasingly having to contend with various militant, insurgent and terrorist groups, many of them receiving strong support from the Soviet Union and other state actors. The U.S. did not try to find a one-size-fits all Offset Strategy to counter every possible threat the U.S. or its allies faced, and had it done so it would have failed. Nuclear weapons were useless in countering the Vietcong or the Iranian Revolution, but they proved enormously successful in preventing the Soviet Union from swallowing Western Europe.

Given that the Pentagon’s issue portfolio has expanded substantially since the 1970s, a one-size-fits-all Offset Strategy has only become more difficult as well. The U.S. would therefore do well to tailor its Third Offset Strategy to the more concrete goal of defeating the A2/AD challenge in general, and China's A2/AD capabilities in particular.

Zachary Keck is the managing editor of The National Interest.