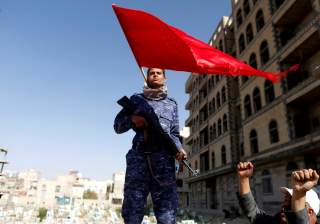 Recent Congressional debates about the Yemen war have put a high priority on imposing costs on the Saudi-led military coalition by restricting arms sales and military cooperation. Moreover, this past week’s vote in the U.S. Senate is just the latest in a series of Congressional actions sending a message of disapproval about the Trump administration’s military policy in Yemen. But that’s only one aspect of a deeper policy discussion that needs to emphasize diplomacy.

To get serious about peace in Yemen, we need to examine all of the measures needed to help Yemenis achieve lasting stability.

We recently visited Oman to understand the role that the small Sultanate plays in trying to de-escalate regional tensions and bridge divides within Yemen. Renewed, robust U.S. efforts—working with Oman and other partners—to resolve the conflict and the humanitarian crisis would promote U.S. values and national security interests in this strategic crossroad.

On the eastern edge of the Arabian Peninsula—bordering Yemen, Saudi Arabia, and the United Arab Emirates—Oman’s guiding philosophy is to build positive ties with all its neighbors and leading global powers. This approach has become increasingly difficult to maintain in a hyper-polarized Middle East dominated by powerful neighbors acting assertively to deal with the threats and challenges they see.

In Muscat, we met several senior Omani officials involved in supporting the efforts to resolve Yemen’s conflict through diplomacy led by United Nations’ envoy Martin Griffiths. They made clear their determination to help broker a solution. As one senior Omani official described his country’s foreign policy approach to us, “We don’t interfere, but we solve.”

The United States has relied on Oman’s knowledge of the internal political and social dynamics in Yemen to deal with specific challenges, such as gaining the release of American hostages and evacuating personnel from the U.S. embassy in Sanaa. Now Oman is playing a quiet but important role by seeking to shape the calculus of one key party to Yemen’s conflict, the Houthis, and bring them to the negotiating table.

In a separate meeting with key Houthi leaders who have represented the movement at recent international negotiations to end the conflict, we experienced how difficult it will be to negotiate peace in Yemen. We heard firsthand in private conversations, a Houthi ideology informed by the ugly anti-Semitic and anti-American ideas expressed in their public slogan, and it remains unclear how much control the voices seated at diplomatic tables have over the forces on the ground.

Yet Oman continues to lay the foundations for a negotiated settlement in Yemen. Its local knowledge, ties with both sides, reputation for even-handedness could prove essential in bolstering the efforts by the United Nations to broker a lasting peace. An effective and comprehensive resolution can only occur if several players are engaged with the warring factions within the country—a path Oman is pursuing. Given the worldview and actions of actors like the Houthis, these diplomatic and political efforts will likely take considerable time to bear fruit.

Another challenge exists at the regional and international levels to build sustained support for both diplomacy and reconstruction efforts. Yemen has become not just a conflict between the people of that country, but also the centerpiece of a struggle among regional power centers. But engaging those powers is essential to long-term stability—Yemen’s neighbors have a direct interest and the financial resources to help the country stand on its own in the long run, as witnessed in the recent donor conference on Yemen.

Yemen is a distant and relatively small country, so one may ask why any of should this matter to the United States. First, no one can dispute UN Secretary General Guterres’ description of Yemen as the world’s worst humanitarian crisis. Malnourishment, hunger, and cholera are persistent and growing; at least three-quarters of all Yemenis require assistance and protection. The United States has a proud and bipartisan tradition of addressing humanitarian crises overseas, from Herbert Hoover heading the American Relief Administration after World War I, to the Marshall Plan, to the establishment of the Agency for International Development.  Simply put, inaction is inconsistent with our values—as is acting in support of a bombing campaign that shows little promise of conflict-ending victory, while deepening the humanitarian crisis.

Second, Yemen’s war is a threat to regional and global security interests. Yemen is situated along key strategic choke points like Bab El-Mandeb, a strait between Yemen and the Horn of Africa that is vital for global shipping. Terrorist networks with a long reach, like Al Qaeda in the Arabian Peninsula, continue to exploit instability in Yemen. Yemen’s territory has been used to attack neighboring countries like Saudi Arabia, and it has provoked a military response by the Saudi-led coalition that has fragmented the country.

Ending U.S. military support for the Saudi-led coalition will not stop the war or address the humanitarian crisis. Successfully and comprehensively addressing the grave situation in Yemen will require patient diplomacy, which inevitably will see ups and downs given the nature of the conflict and the combatants inside and outside Yemen.

But it is worth intensifying America’s diplomatic efforts supporting the UN Envoy’s fragile peacemaking efforts and coordinating with key partners in the region like Oman to reduce tensions and build confidence. Doing so promotes U.S. values and security interests.

We owe it to the Yemeni people to employ all the tools available to support a lasting peace in their country.

Gordon Gray is the COO of the Center for American Progress and is the former U.S. Ambassador to Tunisia (2009–2012). Brian Katulis is a senior fellow at the Center.