Wanted: A Strategy to Limit China's Grand Plans for the South China Sea 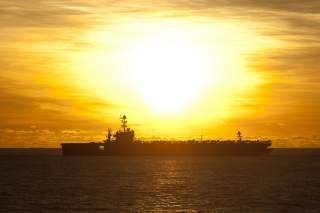 The United States has significantly accelerated the pace of it freedom of navigation operations (FONOPs) in the South China Sea. Last year it conducted four such operations in the span of five months. This contrasts with the four FONOPs conducted during President Barack Obama’s entire second term.

On January 17, the USS Hopper, a U.S. Arleigh-Burke-class destroyer, conducted the first FONOPs of 2018. This one occurred near Scarborough Shoal, much farther north than the previous operations. Like those earlier FONOPs, it rapidly drew a rebuke from the People’s Republic of China.

China’s Defense Ministry spokesman declared that the repeated “illegal” entry (feifa jinru; 非法进入) of American warships to Chinese island groupings and maritime regions in the South China Sea endangered both sides. He condemned the operations as a threat to Chinese sovereignty and security and said they disrupted regional security and stability.

Scarborough Shoal has been a source of ongoing friction. Claimed by both China and the Philippines, it was the scene of a confrontation between Manila and Beijing in 2012. The United States brokered what was supposed to be a mutual withdrawal, but which saw the Chinese remain establishing effective control over the area. Thus far, however, Beijing has refrained from engaging in the kind of island reclamation or building at Scarborough that it has conducted in the Spratly Islands and the Paracel Islands.

But that restraint may be coming to a close. China’s state-run news agencies now openly acknowledge that the nation has, indeed, engaged in significant land reclamation and artificial island building in the South China Sea region. Chinese media have also unveiled a number of new dredges. This includes the Tian Kun Ho, one of the most powerful excavation vessels in Asia. The 140-meter-long vessel can reportedly dredge six thousand cubic meters per hour, and reach thirty-five meters below the ocean surface. Beijing appears to be warning that it can engage in rapid island development at any time—and Scarborough Shoal is potentially one of those sites.

The People’s Republic of China has long promulgated a map of the South China Sea that includes a “nine dash line” encompassing most of the region. Based upon a map initially published by the Republic of China, Beijing has been ambiguous over what exactly the nine-dash line represents. Is it a claim over the land features within it, including the Paracel Islands, Spratly Islands and Scarborough Shoal? Or is it an assertion that the entire region, including the waters, belongs to Beijing, essentially making the South China Sea its territorial waters? Its behavior, including repeatedly interfering with American warships and military aircraft transiting the region, would seem to suggest the latter. Beijing, however, has protested this view, arguing that it has never interfered with civilian ships on the sea lanes that traverse the area.

But Beijing bluntly rejected the findings, often in very intemperate terms. Chinese Foreign Ministry spokesman Lu Kang described the PCA as a “law-abusing tribunal” engaging in a “farce.” China’s ambassador to the United States, Cui Tiankai, accused the tribunal of “professional incompetence” and “questionable integrity.” Indeed, since the ruling, Beijing has expanded its military presence, despite promises to President Obama not to “militarize” the South China Sea.

Meanwhile, Chinese actions have also increasingly worried Indonesia. Indonesian territory extends to Natuna Island and an associated array of natural gas fields in the southwestern portion of the South China Sea. Chinese fishing boats have steadily encroached on its waters—much like they had on Scarborough Shoal. More alarming, one Chinese fishing boat detained by Indonesian authorities for illegal fishing has been seized back by the China Coast Guard. China’s growing naval capabilities have therefore also raised concerns. Most worrisome, Indonesian requests to clarify whether Natuna Island (and the surrounding waters) are encompassed within the nine-dash line have not received official clarification from Beijing. Instead, the PRC has said that, while it recognizes Indonesian sovereignty over Natuna island, it still retains “overlapping claims to maritime rights and interests.”

These issues led Indonesia to expand military facilities near Natuna in 2016. This has included expanding the island’s runway and increasing the number of troops deployed there. In 2017, Djakarta announced that it would rename the area near Natuna, within its own Exclusive Economic Zone, the North Natuna Sea. The Chinese promptly rejected this move, warning that it would not be “conducive” to good relations.

The name change has been implicitly endorsed by the United States, however. Secretary of Defense James Mattis used the term while visiting Indonesia, saying, “We can help maintain maritime domain awareness in the South China Sea, the North Natuna Sea. . . . This is something that we look forward to doing.”

An Integrated Course of Action for the Future

There is no reason to think the Chinese will back away from their increasingly assertive stance toward the South China Sea. Far from opening to compromise, Beijing has steadily tightened its grip over the area, while its actions toward Indonesia suggest that its ambitions may extend even further. Beijing is clearly engaged in a long-term effort. It is essential, then, for the United States to have short-, medium-, and long-term responses.

One of the great challenges has been China’s island construction. Literally moving earth and sea, Beijing has built entirely new islands, complete with airfields and military installations, and thereby changing the facts on the ground. The growing strength of all parts of the People’s Liberation Army (PLA)—including the PLA Navy, PLA Air Force, and the PLA Rocket Forces—makes challenging China an ever more dangerous proposition.

But China’s ability to build these islands rests upon certain companies, such as the state-owned China Communications Construction Company, and their attendant ability to build and maintain dredging capabilities. Insofar as their dredging equipment relies on imported parts, restricting the sale and supply of those parts can affect the pace of operations. The Tian Kun Hao’s predecessor, the Tianjing, clearly relies on imported equipment.

It is also possible to restrict the operations of some companies engaged in Beijing’s dredging operations. Not all are state-owned enterprises. Some are commercial entities, based in China and Hong Kong. Denying them the ability to bid on commercial contracts in the United States (and, ideally, Japan, Australia and Europe), would compel them to assess whether South China Sea operations are worth the price. State-owned enterprises, too, can be vulnerable to sanctions. Even though they are less vulnerable to sanctions, China would nonetheless like to expand their global footprint. By publicizing their role in South China Sea activities, and imposing sanctions on their operations, it may be possible to limit their international presence, or at least affect perceptions of them.

Perhaps the greatest political challenge to limiting Chinese action is the lack of coordinated responses among the other claimants. In the Spratly Islands, it is not a matter of ASEAN states versus China, but rather an array of mutually challenging claims. Malaysia, Vietnam, Brunei and the Philippines all claim at least parts of the Spratly Islands. For there to be any hope for balancing the Chinese political push, the local states must first reach a common negotiating stance among themselves. The United States needs to play an active role in helping broker such a stance among Kuala Lumpur, Manila and Hanoi.

Similarly, any kind of common Southeast Asian response to China must eventually include Indonesia, the most populous of the ASEAN members. ASEAN is unlikely to assume a direct military-security role, but enhancing the members’ mutual information-sharing, maritime domain awareness, and general situational awareness would facilitate intra-ASEAN confidence. The inability to determine the fate of Malaysian Airlines MH17 underscores the general utility such improved information sharing could have, regardless of Chinese claims in the region.

Improving local coordination will also require rehabilitating relations with Thailand. Within ASEAN, Thailand is the fourth most populous nation, boasting the second largest GDP (in nominal terms) and one of the largest militaries. It is also a U.S. ally and has been a key partner in many U.S. military interventions in the post–Cold War era. It is also centrally located as part of the “Indo-Pacific” region.