Wanted: A Strategy for Stabilizing Syria 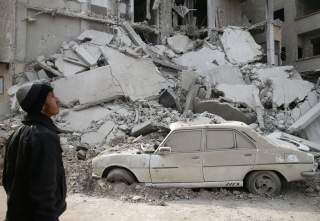 The recent bombings by the Assad regime of a suburb of Damascus called Ghouta have just killed several hundred people, most of them innocent civilians, and dramatized the point that despite America’s success in defeating ISIS on the battlefield, the civil war in Syria is far from over. The regime is ignoring a new UN Security Council cease-fire resolution and continuing on with the horrors. What is the world community to do about a conflict that has already killed half a million people, that keeps more than ten million people from their homes (about half as refugees in foreign lands), that provides sanctuary for an Al Qaeda splinter group as well as remnants of ISIS, that continues to allow playgrounds for Iranian and Hezbollah adventurism, and that still pits NATO allies Turkey and the United States against each other in their respective strategies towards the country’s Kurdish population?

The Trump administration is justified in boasting that it built on President Obama’s efforts of 2014–2016, expanding and accelerating the strategy it inherited to drive ISIS from areas in Iraq and Syria where they had controlled nearly ten million people. But with that important interim goal achieved, it is time to get serious about a sounder strategy for the war writ large. Otherwise, the human suffering could continue, the terrorist threat could return, and the opportunities for Iran and Hezbollah to expand their influence at the expense of U.S. allies like Jordan and Israel could expand.

In a January speech at Stanford, Secretary of State Tillerson made a start on this task. He outlined several principles for developing a fuller strategy towards Syria. Specifically, he promised:

- to sustain the military campaigns against ISIS and Al Qaeda affiliates,

- to continue the UN-sponsored process in Geneva that aims to produce a new government for the country,

- to diminish Iran’s influence in Syria,

- to help refugees and other displaced go home, and

- to ensure that Syria is free of weapons of mass destruction.

Tillerson also promised a continued U.S. role, through military and diplomatic and economic tools, to help stabilize that half of the country and population that President Assad does not actually control, while also vowing not to help Assad rebuild any of the parts of the country that he still does control. He pledged that America would respect Turkey’s concerns about Kurdish autonomy and Kurdish terrorist groups. He further promised to expand the use of local cease-fires in Syria to lessen human suffering; unfortunately, such ceasefires have been doing little to protect vulnerable populations in places like eastern Ghouta as well as the city and region of Idlib in the country’s north.

However, a truly serious strategy needs to do more. There are gaps and flaws in Tillerson’s admirable first draft of a comprehensive Syria strategy for the Trump administration. Collectively, fixing them will make our strategy more realistic, more muscular, and more operational. Specifically, three changes or additions are needed:

- Get Real on Politics

The United States needs to correct its belief that the UN can negotiate Assad out of power in favor of a democratic, representative government. For Assad, this would be snatching defeat from the jaws of something that for him approximates victory. Since he comes from the Alawite minority group in Syria, any national government based on majority rule will almost surely displace his closest allies and raise the risks of retaliation against them. Assad should go from office, but the United States must accept that he will insist upon having a major hand in choosing his successor, and that power-sharing with explicit roles and guarantees for all major groups will have to be part of any deal.

- Scale Up Economics and Security Aid to Autonomous Zones

The United States and its partners need to turn up the intensity of help for the liberated, autonomous areas. Flowing a few tens of millions of dollars to them through USAID is not enough. Big money is needed, including from Gulf states, the EU, Japan, and the World Bank, to rebuild homes, reopen schools and hospitals, and create self-defense capabilities more akin to police forces than opposition armies. Figuring out how these other donors can provide aid to unofficial entities within a sovereign state, bypassing the official government of that country, is going to be a difficult endeavor and has barely begun. Some type of informal peacekeeping arrangements may be needed down the road too, to create buffer zones between the autonomous zones and regime-held territory in parts of the north and south of the country. However, such funds should not flow to Assad or the regions he controls until he steps down, except for limited amounts of humanitarian aid once he starts respecting ceasefires.

- Develop a Sound Strategy on the Kurds and Turkey

Finally, if the United States is to pursue a strategy built largely around helping autonomous zones rule themselves (at least temporarily), then it needs a better answer to the Kurdish question, because Turkey will continue to see any such a strategy as a fundamental threat to its security. A continued, long-term American presence in northern Syria to help monitor the border against possible flows of fighters and weapons between the YPG in Syria and the PKK inside of Turkey must be one element. Another is to declare explicitly that the Kurds will need to have at least two separate autonomous zones, with Turkish forces juxtaposed between them indefinitely, and that they will need to allow non-Kurdish towns within their zones a degree of additional local autonomy. But the United States might go further, articulating a broader pan-Kurdish policy in which it explicitly declares that it will not support Kurdish independence in any part of the broader Middle East. As a practical matter, the United States won’t do it anyway, but to date, Washington has resisted such a strong statement. Now is the time to be more clear.

Even with these improvements in strategy, Syria will of course remain a challenging environment for much of Trump’s current term in office—and alas, as noted, it may be too late to save eastern Ghouta. But if the United States wishes to keep moving towards a net improvement in the situation, celebrating and sustaining the defeat of ISIS will not be nearly enough. It is time, seven years into the war, for a realistic and comprehensive strategy to stabilize Syria.

Image: A man stands near rubble of damaged buildings after an airstrike on the Eastern Ghouta town of Misraba, Syria, January 4, 2018. REUTERS/Bassam Khabieh