The War Against Donald Trump 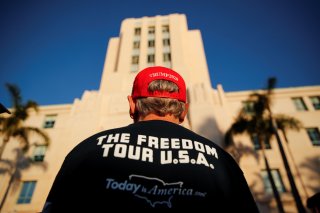 JOE BIDEN is the apparent winner of the U.S. presidential election. There are evident substantial discrepancies and improbabilities in the vote-counting of several states, and though Biden probably wins, even legally, it will be on the basis of questionable laws passed earlier this year to facilitate postal voting for coronavirus-related reasons and to facilitate fraudulent voting. But Biden undoubtedly led in the popular vote, as Hillary Clinton had in 2016, so whatever happened did not entirely negate the choice of a plurality of Americans. Yet it is very unedifying that Rounds 1 and 2 of the Great Trump War have included extraordinary incidences of illegal activity. Namely, the probably criminal politicization of the intelligence services and FBI in 2016, including fraudulent FISA warrant applications from senior officials to justify espionage on the Trump campaign and transition team, and more recent conspicuous electoral skullduggery in 2020. Donald Trump won the first round of the Great Trump War, even if the crimes committed against him go unpunished. And he has gained the substantial ratification of his policies and widespread success in Congressional and state elections, including the legislatures that will determine Congressional redistricting, even if he is evicted from the White House. He has won seventy-four million votes and conducted a tremendous battle against the massed opposition of regular and social media, Big Money, Big Tech, Big Sport, and Hollywood.

The Trump War continues, and the Biden administration shows no sign of being competent. The choice of Tony Blinken as secretary of state entitles us to fear the worst. He was an apostle of the Trump-Russian collusion nonsense and the supposed Mephistophelean influence of President Vladimir Putin on Trump. He holds to the necessity of gaining PLO-Hamas support for any arrangement between Israel and the Palestinians, and to the appeasement of Iran. The official commitment is to go back to the so-called Joint Comprehensive Plan of Action with Iran, approving Iran’s assumption of full status as a nuclear military power in five years. The Democratic Party platform holds that re-engagement with Iran will lead to Iranian renunciation of its nuclear military program and of its assistance to terrorist organizations, especially Hamas, Hezbollah, and the Houthis in Yemen, in exchange for an end of sanctions and access to the global economy. Iran would expect a softer deal from Biden than it could get from Trump, though it is possible that the new administration might just sound a gentler and more conciliatory note but be substantively as exigent as the present administration has been. Biden did give Trump some credit for negotiating the opening of relations between Israel and the Emirates and Bahrain, and he and Blinken might be pragmatic enough to continue a policy that seems to be working well while implying that they are more reasonable than Trump and Mike Pompeo, along with the obligatory adoption of more gregarious and upbeat language.

Because of his relaxed attitude to China in trade matters, and even for a time concerning the coronavirus, as well as the controversial financial relations of his family with the People’s Republic, Biden as president would likely substantially continue the Trump policy, though again, he would probably attempt a less confrontational and accusatory approach than have President Trump and Secretary Pompeo. Biden would probably be reticent about escalating relations with Taiwan, a country we can assist, but perhaps somewhat more vocal about the Uighurs, Hong Kong, and Tibet, whom we cannot.

As his entire background is legislative compromise and discussion, Biden would take naturally to the kind of jovial collegial discussion that keeps America’s official allies content and hopeful that they are really being listened to and have a share in collective decisionmaking. America’s allies are always uneasy with forceful administrations who emphasize the American national interest over collective security and international organizations. They were uneasy with Richard Nixon, though they soon acknowledged his expertise, and with Ronald Reagan, though they eventually had to recognize both his goodwill and success. They have been horrified with Donald Trump, which would make them comparatively easy for Joe Biden to please and reassure.

With all that has gone on, Biden is unlikely to be as wildly enthused about an integrated and ever-expanding Europe as Barack Obama was. While little is known of the Biden circle’s view of Latin America, they will make the usual efforts to improve the ambiance of relations and make some well-publicized improvements to border-crossing arrangements, but are unlikely to open up to substantially expanded illegal immigration. Increased aid to Central America, and greater attention to the principal South American countries generally, are likely. Some relaxation with Cuba and Venezuela may be possible, and is a bit of an Obama-Biden totem. Biden is a more unambiguous American than Obama, not requiring much persuasion to wear an American flag on his left lapel, and he has much more faith in jaw-boning—he invented the Russian “reset,” fiasco though it was. He is unlikely to apologize for Roosevelt, Truman, and Eisenhower, as Obama did, and is less prone to find the United States part of the problem, as Obama is.

The Far Left elements of the current Democratic Party are unlikely to exercise as much influence on foreign policy as has been feared, apart from what will surely be an appallingly fanatical effort by John Kerry to sell the Green Terror. In general, Biden is likely to be more of a reversion to the Clinton era than the latter Obama, which should be a matter of some relief and consolation to all.

Conrad Black is a writer and former newspaper publisher whose most recent book is Donald J. Trump: A President Like No Other. He is Chairman Emeritus of The National Interest.