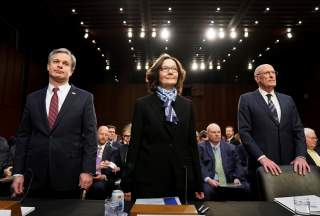 The state of open political warfare between President Donald Trump and the Intelligence Community (IC) goes beyond the ambivalence that has typically characterized relations between past presidents and spy chiefs and has serious implications for national security, according to three former CIA officers who spoke at a recent panel discussion at the Center for the National Interest. Assigning blame for this state of affairs is not easy, however, and there is no simple formula for mending ties.

Friction between the president and IC made headlines two weeks ago, after U.S. Intelligence Chiefs provided their annual Worldwide Threat Assessment to the U.S. Senate Select Intelligence Committee. The assessment’s judgments on North Korea, Iran, ISIS, and climate change seemed at odds with White House views, and the president tweeted in response that the IC was “naïve” and “needed to go back to school.” But this was not a policy dispute, observed Mark Lowenthal, a former assistant director of Central Intelligence and a former staff director of the House Permanent Select Committee on Intelligence, who pointed out that the IC is not “in the policy business.” The assessment simply “disagrees with a lot of his premises,” which he said was not unusual by historic standards.

But while clashing perspectives on global developments is normal and even necessary for formulating effective policy, “open warfare” between the president and IC is not. Many past presidents have fallen out of love with the Intelligence Community, including John F. Kennedy and Lyndon Johnson, who compared intelligence to “the dirty end of a cow’s tail swiping through a bucket of [the policymaker’s] milk.” But it is unprecedented, Lowenthal observed, for a U.S. president to say at televised press event that he believes the assertions of a foreign leader over the judgments of his intelligence professionals.

Paul Pillar, a former national intelligence Officer for the Near East and South Asia, addressed the controversial question of the politicization of intelligence. He noted that during the George W. Bush administration, erstwhile Under Secretary of State John Bolton’s repeated requests for evidence of a non-existent Cuban biological weapons program was a particularly unsubtle and egregious example of this phenomenon. Other examples include policymakers “only asking questions in one direction,” which can pressure intelligence to focus on evidence that corroborates the president’s preferred policy option, as happened in the run-up to the 2003 Iraq War. These pressures underscore the importance that intelligence provides objective analyses and avoids being used for political purposes by either the White House or the opposition party in Congress. This becomes more challenging during periods of intense friction between the White House, Congress, and the IC.

Open warfare between the president and IC can become dangerous, according to George Beebe, a former head of Russian analysis at the CIA and current vice president and director of studies at the Center for the National Interest. “The belief on the president’s part that the Intelligence Community really wants to see him out of office, that [it believes] he was illegitimately elected, that he has no business being president” makes intelligence warning much more difficult. “Intelligence warning is a relationship function,” he observed. For the IC to warn effectively, it requires a working relationship and effective communication with the president. Both the president and IC are responsible for building and maintaining this relationship, which Beebe called a “two-way street.” Acrimonious relations between the president and IC can also exacerbate natural human tendencies towards confirmation bias, to zero in on evidence that shows your side of the dispute is correct, which can color both intelligence assessments and policy judgments.

The panelists agreed that the relationship between President Trump and the IC is substantially damaged. But what should the White House-IC relationship look like in principle? Pillar noted that despite what some may claim, intelligence officers do not “have a right to be heeded on policy,” and “policymakers have not only the right but the responsibility to utilize their own judgment” when it comes to acting on intelligence provided to them. Beebe stated that intelligence by its nature is meant to “warn of approaching storms, but presidents don’t think they were elected to hand out umbrellas,” which means there will always be an element of friction in their relationship. The panelists agreed that politicians often have an intuitive feel for political dynamics that can help them anticipate discontinuities that intelligence experts might discount. A give and take between the White House and IC can take advantage of each side’s strengths and “make full and effective use of that decision advantage that Intelligence can provide.”