War by Other Means 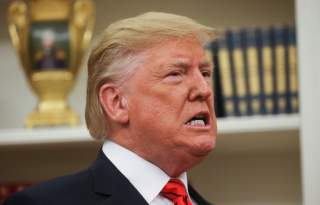 WITH THEIR decision to launch an impeachment inquiry of President Donald Trump, congressional Democrats have embarked on a step that will have profound implications both for American domestic and foreign policy. Much of the media discussion about the Trump impeachment inquiry has centered on handicapping this latest phase in the political battle between Republicans and Democrats to retain or regain the presidency. Far less attention has been paid to the question of the implications that the inquiry may have for the security and integrity of our republic.

Yet it is in this latter question where the stakes are highest. Absent decisive and forceful leadership, America will become more vulnerable to the designs of other nations. As Robert W. Merry has recently observed in these pages, a central reality of American politics is that “when the president is weakened at home, America is weakened abroad.”

The impact of Watergate, for instance, was anything but trivial. Arms-control efforts with the Soviet Union collapsed. An ignominious retreat from Vietnam took place. OPEC was emboldened. In short, the consequences were grave as American credibility around the world was tarnished. Not until the 1980s did America begin to regain the prestige and luster, the confidence and pride, that it had once enjoyed.

What happened before can happen again. This is why the move toward impeachment proceedings is cause for concern. If the impact of the earlier Mueller investigation serves as any guide, the implications of what Ukrainians are sardonically calling the “Monica Zelensky scandal” for American foreign policy might be significant. The earlier Russiagate controversy played an important role in hardening American policies toward Moscow, as the White House strove to counter a fusillade of accusations that the president was acting as an agent of the Kremlin. The charge that Trump sought personal political benefit by holding up congressionally-mandated military assistance to Ukraine is likely to impose similar constraints on his handling of the warfare between Kiev and Russian-backed forces in Ukraine’s east, thereby rendering a solution to the conflict less, not more, likely.

But beyond affecting the particulars of specific American policies toward allies and adversaries, the impeachment saga may have a more lasting effect on the process of foreign policymaking itself. The release of the president’s personal phone calls with world leaders sets a troubling precedent, not only undermining the ability of an American leader to trust that he can speak frankly but also constraining his counterparts.

Nor is this all. Some degree of trust between the presidency and the permanent bureaucracy—or, if you prefer, the deep state—is a critical ingredient in interagency decisions and policy implementation. An elected president must be able to rely on the intelligence agencies. Their relationship should be reciprocal, not hostile. Otherwise, information sharing within government slows to a trickle. The implementation of even a well-conceived policy inevitably suffers, as those tasked with carrying it out either actively resist or fail to understand what they should be doing and why.

Perhaps the most worrisome development is that the polarization that has afflicted American domestic policy is now seeping into foreign policy. Disputes over policy are no longer political but war by other means. When trust becomes a dead letter between the White House, Congress, media and national security apparatus, America’s foreign policymaking becomes crippled. Meanwhile, the changing fortunes of the participants in these domestic battles will prompt our friends and foes abroad to regard American foreign policy as the metaphorical equivalent of New England weather: when they don’t like it, they just have to wait a minute; when they do like it, they cannot be sure it will not shift in the blink of an eye.

The result is likely to accelerate a process already underway in which American power and preeminence are slipping away. Major powers abroad, observing Washington’s fit of national solipsism, will seek to constrain the United States rather than work with it. Not many years ago, former Secretary of State Madeline Albright called the United States the “indispensable nation.” That appellation looks less apt than ever. If it continues on its current course, America will head not only into a domestic but also a foreign policy crisis that is mostly of its own making.