War Is Still About Killing People 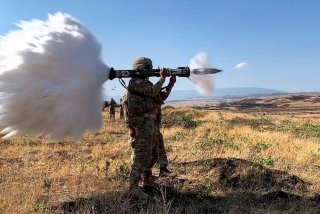 Death and destruction are part of war. That will not change anytime soon. Suffering and annihilation are curses humanity imparts to itself. Sadly, there will always be those willing to bathe their policies in blood.

Even the good guys, those who would seek peace and the protection of innocents, will find that justice sometimes demands the heaviest of hands. No issue merits more hard thinking than warfare, and thinking about war requires, first and foremost, thinking about killing.

A discussion of war without talking about lethality is about as helpful as a discourse on the Grand Old Opry without mentioning country music. Enter, Paul Douglas Lockhart’s Firepower: How Weapons Shaped Warfare—an erudite, accessible, and comprehensive overview of the development of lethal weapons technology in early modern and modern history.

Lockhart, a professor of history at Wright State, traces the development of killing technologies from the introduction of gunpowder in Western warfare though modern times. Firepower gives equal weight to war on land and seas, also introducing the advent of airpower in the twentieth century.

Firepower is not just about the changes in weapons, such as when marching armies moved from matchlock muskets to flintlocks. Lockhart also covers the dynamic relationship between the use of lethal technology and changes in the organization and tactics employed by military forces.

The book emphasizes the relationship between the development of military forces and governance, political economy, and industrial development. Lockhart restates how the rise of the nation-state, powerful militaries, and the dominance of states in conventional warfare go hand-in-hand. In many ways, his book is a useful update of William H. McNeill’s The Pursuit of Power: Technology, Armed Force, and Society since A.D. 1000 (1984).

There is much to appreciate in Firepower including the simple, explicit, and practical explanations of technical military innovations and how they were employed in battle as well as how they interplayed with political and economic change. What is most refreshing about this new military history is that, in contrast what is trendy in academia, Firepower does not shy away from the main activity of warfare—humans killing other humans. The distinguished war historian Max Hasting recently wrote a piece getting a lot of attention decrying the reluctance of academia to teach the blood and guts of military history. It is a great failing of colleges and universities that they don’t teach military history that’s particularly useful for understanding how militaries fight wars. Lockhart totally goes against the grain. Good for him.

If anything, Firepower, doesn’t go far enough (though at over 600 pages, the book is long enough). War is all about killing. There is, however, a lot more to killing in war than just lethal technologies. The history in Firepower is a necessary, but not sufficient, background to understand the dynamics of competition and conflict. A sound military history education requires delving into all the operational aspects of warfare from logistics to medical practices, as well as the breadth of how the tactical level of war interweaves with campaigns and strategy and the larger issues of geopolitics.

Perhaps the most important aspect of a sound military history education is learning how to learn from military history. There is not much value in winning trivial pursuit by knowing the names and dates of battles or the muzzle velocity of a smoothbore musket. Nor does knowledge come from tapping into experts like Lockhart. The great value of military history lies not in the greatness of the historians, but in the rigorous critique of the sources and methods behind their histories and the sharp assessment of their analyses. Military history is a laboratory for hard thinking about the hardness of war.

There has never been a more important time for hard thinking about war. The monopoly of conventional conflict by powerful states is likely to continue and accelerate in the age of great power competition. This trend is fueled by a global, private-sector industrial and services base that includes not just defense industries but also advanced manufacturing companies; software and services platforms; the space industry; and commercial sources of new products, services and innovations. We can also expect more of the ancillary forms of conflict, from insurgencies and terrorists to sabotage and disinformation. Buckle up. Some of the bloodiest military history has yet to be written.

The next age of warfare will introduce new capabilities as groundbreaking as gunpowder. They will, however, not make war any less messy, unmanageable, deadly, or destructive. Further, none of these technologies, not even artificial intelligence, will take the human out of the human aspects of warfare. Technology is a factor in war, not the deterministic force dictating the outcome.

Firepower reminds that, in the end, almost every state gets access to the newest killing technology. Further, the state that gets it first doesn’t always come out on top. Military history is not just an arms race. History is, however, shaped by what big powerful players do with killing technology. Not remembering that and figuring out how it applies to keeping nations free, safe, and prosperous in the modern world is a sure way to fail to prevent the next war…and maybe lose it.