War in Syria: Time for America to Get Tough on Russia 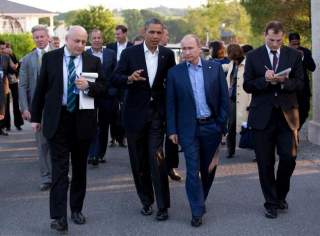 Last week, Russia hit Syria with 26 Kalibr cruise missiles fired from its warships in the Caspian Sea. The strikes mirrored the U.S. Tomahawk missile strikes against Iraq and Afghanistan of the past decade. This is the first time Russia is using military force outside the Soviet perimeter since the collapse of the USSR, returning to play global power politics. If Russia stumbles into a Cold War—or worse—it may be costly, if not fatal.

Fighting in Syria seems to be heating up, making a proxy conflict and potential confrontation between Russia and the USA more probable than ever since the end of the Cold War.

This is not new. Great powers have rubbed each other the wrong way before. In some cases, confrontations have led to de-escalation, in others—to more conflict. In 1898, the Fashoda incident brought the British and French Empires to the brink of war.

Both empires wanted a trans-African corridor—Senegal-Djibouti for the French and Cairo-Cape Town for the British. The French expedition met the British army commanded by Lord Kitchener near the town of Fashoda in South Sudan, ready to fight. The incident threw London and Paris into prewar frenzy, complete with naval mobilization. Thankfully, France realized that it could not compete with the British Navy, and both sides cooled off in time to agree on dividing Africa by the Nile-Congo watershed.

The trans-African railroads France and England dreamt to construct were never built, but the conflict resolution helped form the Entante Cordiale in 1904, which clashed with the Kaiser’s German Empire in the Tangier and Agadir Incidents, when Berlin backed off. However, in August 1914, the big showdown finally came, with catastrophic results for Europe.

Both Russia and the United States have ample experience with minor conflicts, proxy wars and regional wars. In the 1840s, the United States gained a sizeable piece of territory in the Mexican War. And in the 1898, the Americans were victorious against the decrepit Spanish Empire, occupying Puerto Rico, Cuba, Guam and the Philippines.

In the second half of the twentieth century, the United States was not as successful. The 1950-1953 war in Korea was a draw. Vietnam was a defeat. The Soviets won in Africa and the Middle East against American proxies in Ethiopia, Somalia, Angola and Mozambique. The United States did win in 1991 in Iraq, but the Second Gulf war ended in a painful draw, just like Afghanistan.

Russia has also fought with mixed results. The Russo-Japanese war demonstrated the weakness of the Romanoff imperial army, which the First World War confirmed. The Red Army lost in Poland in 1920. In the Spanish Civil War, Joseph Stalin backed the leftist Republicans, but Francisco Franco’s nationalists, supported by Hitler and Mussolini, won. Stalin did count Finland as a victory in 1940, albeit a costly one.

Afghanistan is the most recent limited engagement fought by Russia. It lasted fifteen years, cost 15,000 battlefield dead, and was unpleasant enough to limit Russia’s involvement in such conflicts for a long while.

However, Russian President Vladimir Putin has now decided that it is time to flex muscles outside of Moscow’s traditional sphere of influence, also known as the “near abroad.” While Russia has little experience in the Middle East, it knows Syria well. Moscow has been Damascus’s patron since the 1950s, and to the Assads, both father and son, since the 1970s.

In the current conflict in Syria, the Russian contingent is outmanned, if not outgunned, by the Sunni Syrian rebels. Coordination with the Iranians and the Syrians must be a nightmare. At the same time, the United States is facing military budget cuts, a severe shortage of suitable “moderate” allies, and an unruly sixty-country anti-ISIS coalition.

Russia does not seem to have enough forces for both the Syrian and Ukrainian theaters, and Putin has repeatedly said that he will not deploy a massive ground force in Syria. The United States should hold him to his word. Russian encroachment in the Middle East may further escalate the conflict, sending millions more refugees streaming toward the brittle European Union. Moreover, a Russian-Iranian axis from Teheran to the Mediterranean would present a massive challenge to the United States and its Sunni allies. Thus, Washington needs to be firm with Moscow, clarifying that aggression comes at a high price.

To avoid escalation, the militaries of both powers need to clarify the rules of engagement. The Americans and the Russians should establish proper military communication channels. Pilot rescue protocols and notifications of action between Russia and the US and Turkey have to be set. Absent these measures, border violations and “accidents”, including planes being shot down, may trigger clashes.

Barack Obama has no desire to fight with Russia, nor is he the only one who can. ISIS has plenty of gall; and behind the Islamic radical militias of Jibhat al-Nusra, an Al Qaeda derivative, stand Saudi Arabia, Turkey and Qatar, who might follow the ancient Middle Eastern tradition of washing away insults with blood. The consequences of Russian truculence in Syria might thus soon be felt in Moscow or the North Caucasus.

Moscow and Washington should be aware of the downsides of their past proxy wars and proceed into the future with caution.

After all, a direct confrontation could escalate quickly, and no one can “win” a nuclear war.

Ariel Cohen, Ph.D., is Senior Fellow at the Atlantic Council and Director, Center for Energy, Natural Resources and Geopolitics at the Institute for the Analysis of Global Security (www.iags.org)