From War to Tug-of-War: The Global Fight for Connectivity 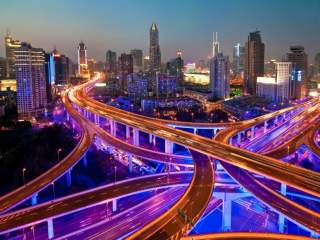 The rope in today’s geopolitical tug-of-war is connectivity. States want to control the transportation, energy and communications infrastructures and markets that enable them to acquire resources, access markets and move up the value chain. We don’t fight over the borders that divide us, but rather pull and yank the supply chains that connect us. While very few societies are at war, all societies are caught in this global tug-of-war, competing over the flows of money, goods, resources, technology, knowledge and talent transpiring between them.

Wars of connectivity are won by economic master planning rather than military doctrine. Think about it: twenty-first-century China is not a superpower because of the size of its military arsenal, but because it has become the central hub for the world’s manufacturing and electronics supply chains, built a sizeable trade surplus and enormous currency reserves, and penetrated most of its neighbors through robust infrastructure networks and become their main foreign investor and export destination. Do you have any clue how many nuclear weapons China has? Exactly: It doesn’t matter. But you probably know a fair bit by now about how China builds special economic zones, buys and steals foreign technology, and capitalizes companies with billions of dollars to ramp up quickly and capture global markets that range from solar panels to mobile handsets.

Britain’s elite Royal Military Academy Sandhurst publishes a manual of strategies for success in tug-of-war, pointing out that a good team “synchronizes its movements to the point that their pull feels like it comes from a single, unified being.” Does America act like this? Do Washington politicians, the Fed, Wall Street bankers, Texas oil companies, Silicon Valley tech companies and the other players on America’s team act like a single, unified being? Or does China do it better? Tug-of-war is won slowly and carefully. Smart teams dig in their heels to hold ground and tire out opponents while collectively taking small steps to ultimately gain control.

Tug-of-war is still war without end, a marathon without a finish line. Winston Churchill once advised that it is always better to “jaw-jaw” than to “war-war,” meaning diplomacy is preferable to conflict. Today’s world is a hybrid of the two: It is an endless tug-tug.

The future of global stability hinges on whether great powers think and act in terms of sovereignty or supply chains—if they learn the benefits of fighting tug-of-war instead of the real thing. It is no doubt unwise to argue that World War III is a passé risk. However, as the French scholar Raymond Aron argued, nuclear deterrence and the benefits of hindsight are crucial in warding against the uncontrolled escalations of the twentieth century or even harrowing episodes such as the Cuban missile crisis. Furthermore, China’s neo-mercantilism today is quite different from the zero-sum European colonial mercantilism of centuries ago: It is the pursuit of catch-up modernization rather than global hegemony. China seeks foreign raw materials and technology, not foreign territory. The smoother the supply chains, the more satisfied China will be.

A hyperconnected, multipolar world is uncharted and dangerous territory, but the paradox of tug-of-war may be that the longer it goes on, the more everyone wins. If we play our cards right, North Korea will become a supply-chain condominium of China and South Korea and other investors variously exploiting its tremendous mineral and agricultural resources while modernizing its nascent manufacturing capacity. India and Pakistan will revive the historic Grand Trunk Road of trade linkages stretching from Afghanistan to Bangladesh, and complete the natural gas pipeline from Iran via Pakistan to India. China and Taiwan will deepen their supply chain linkages and accept the outstanding differences in political systems. And China and Japan will settle their historical grievances through generational change in leadership, and accept with maturity the obvious hierarchy of Asia’s future.

Today’s world is full of tension, strife and hostility: nuclear standoffs, terrorist insurgencies, collapsing states and tragic civil conflicts. It is healthy to remind ourselves that many of our ongoing flash points could potentially escalate through unpredictable chain reactions into global conflagration. But it is even more important to pay attention to what we are doing that prevents the unintended slide into disaster—and do more of it. The future of global stability hinges on whether we continue global supply-chain integration and content ourselves with waging tug-of-war rather than the real thing. The world’s oldest team sport has an admirable track record: almost nobody has ever died playing it.

Parag Khanna is a senior research fellow at the Lee Kuan Yew School of Public Policy in Singapore, and previously a fellow at Brookings and New America. His latest book is Connectography: Mapping the Future of Global Civilization (Penguin Random House).