The War in Ukraine and the Return of Realpolitik 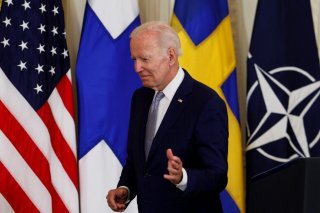 GREAT POWER competition is back. The transatlantic alliance must revise its grand strategy accordingly and downsize its idealist ambitions in favor of pragmatic realism. Throughout the crisis over Ukraine, the West’s ideological North Star—the promotion of democracy—guided statecraft, with NATO supporting and encouraging Kyiv’s aspirations to join the Western alliance. But Russian president Vladimir Putin, unwilling to let Ukraine leave the Russian fold and emerge as a democracy anchored in the West, launched a war to put Kyiv back under Moscow’s sway. Putin owns this war, with the death and destruction that it has produced.

The West’s reaction—arming Ukraine, sanctioning Russia, bolstering NATO‘s eastern flank while extending membership to Finland and Sweden—is fully justified. Yet legitimate outrage over Russia’s pummeling of Ukraine threatens to obscure the need to draw sober lessons from the war. Perhaps the most important is that the world is reverting to the rules of power politics, requiring that ideological ambition more regularly yield to strategic realities in order to ensure that the West’s purposes remain in sync with its means. This adjustment means that the West will need to focus more on defending, instead of expanding, the democratic community. To be sure, by combining its values with its power, the West has bent the arc of history away from the practice of realpolitik and toward greater freedom, human dignity, and peace. But the transatlantic community must now temper its idealist ambitions with greater strategic pragmatism to successfully navigate a world that has just shifted back toward Hobbesian realism.

The unrulier and more competitive world that is taking shape will naturally bolster transatlantic unity—just as the threat posed by the Soviet Union contributed to NATO’s cohesion during the Cold War. Yet the political ills that have been plaguing the West have not dissipated; Russia’s invasion, along with the prospect of a new cold war, is not enough to cure the United States and Europe of illiberalism and political dysfunction. In fact, the war in Ukraine has produced economic spillover effects that could further weaken political centrism. Accordingly, America and Europe face a double challenge: they must continue getting their own houses in order even while they stand together to resist Russia’s war of aggression against Ukraine.

THIS TENSION between lofty ambition and strategic reality is nothing new, particularly for the United States. Since the earliest days of the republic, Americans have understood the purpose of their power to entail not only security, but also the spread of liberal democracy at home and abroad. As Thomas Paine wrote in 1776, “we have it in our power to begin the world over again. A situation, similar to the present, hath not happened since the days of Noah until now.”

Paine was surely engaging in hyperbole, but successive generations of Americans have taken the nation’s exceptionalist calling to heart—with quite impressive results. Through the power of its example as well as its many exertions abroad—including World War I, World War II, and the Cold War—the United States has succeeded in expanding the footprint of liberal democracy. At the time of the nation’s founding, republics were far and few between. Today, more than half of the world’s countries are full or partial democracies. The United States played a leading role in effecting this transformation.

But these ideological aspirations have at times fueled overreach, producing outcomes that compromise the nation’s idealist ambitions. The founding generation was determined to build an extended republic that would stretch all the way to the Pacific coast—a goal that the nation achieved by the middle of the nineteenth century. Much of the United States’ westward expansion took place under the exalted banner of Manifest Destiny, which provided ideological justification for expanding the frontier—but also moral cover for trampling on Native Americans and launching a war of choice against Mexico that led to U.S. annexation of roughly half of Mexican territory. The Mexican-American War and the bout of expansion that accompanied it came back to haunt the United States by intensifying the sectional rift over slavery and pushing the North and South toward civil war.

President William McKinley in 1898 embarked on a war to expel Spain from Cuba—one of its few remaining colonies in the hemisphere—insisting that Americans had to act “in the cause of humanity.” Yet victory in the Spanish-American War turned the United States itself into an imperial power, as it asserted control over Spanish possessions in the Caribbean and Pacific, including the Philippines. “There was nothing left for us to do but to take them all, and to educate the Filipinos, and uplift and civilize and Christianize them,” McKinley insisted as U.S. forces occupied the Philippines. The resulting insurgency led to the death of some 4,000 U.S. soldiers and hundreds of thousands of Filipino fighters and civilians. The United States held on to the Philippines until 1946.

As he prepared the country for entry into World War I, President Woodrow Wilson declared before Congress that “the world must be made safe for democracy.” After U.S. forces helped bring the war to a close, he played a leading role in negotiations over the League of Nations, a global body that was to preserve peace through collective action, dispute resolution, and disarmament. But such idealist ambitions proved too much even for Americans. The Senate shot down U.S. membership in the League; Wilson’s ideological overreach cleared the way for the stubborn isolationism of the interwar era.

Just before launching the U.S. invasion of Iraq in 2003, President George W. Bush affirmed that “we believe the Iraqi people are deserving and capable of human liberty ... they can set an example to all the Middle East of a vital and peaceful and self-governing nation.” The result of the war in Iraq was far different: region-wide suffering and sectarian conflict poised to continue for generations. As for Afghanistan, Bush proclaimed in 2004: “Now the country is changing. There’s women’s rights. There’s equality under the law. Young girls now go to school, many for the first time ever, thanks to the United States and our coalition of liberators.” But two decades of exhaustive U.S. efforts to bring stability and democracy to Afghanistan fell embarrassingly short, with the U.S. withdrawal last summer giving way to Taliban rule and a humanitarian nightmare. Across these historical episodes, noble ambitions backfired with dreadful consequences.

THE UKRAINE question has similarly exposed the inescapable tensions between lofty ambitions and geopolitical realities. These tensions were, for the most part, in abeyance amid the bipolarity of the Cold War, when geopolitical expedience guided the U.S. strategy of containment. The Yalta agreement struck by Franklin D. Roosevelt, Winston Churchill, and Joseph Stalin at the end of World War II was the ultimate realist compromise, leaving much of Eastern Europe under Soviet domination. Roosevelt and Churchill were wisely yielding principle to pragmatism by providing Soviet Russia with a buffer zone on its western flank. Such strategic restraint paid off handsomely; it contributed to stability during the long decades of the Cold War, buying time for a patient policy of containment that ultimately led to the fall of the Berlin Wall and the implosion of the Soviet Union.

NATO’s eastward expansion then began in the 1990s, the era of unipolarity, when Washington was confident that the triumph of American power and purpose would usher in the universalization of democracy, capitalism, and a liberal, rules-based international order. The Clinton administration embraced a grand strategy of “democratic enlargement”—a key plank of which was opening NATO’s doors to Europe’s new democracies and formally welcoming into the West the states of the defunct and discredited Warsaw Pact.

NATO’s eastward enlargement has fostered both moral and strategic gains. The West capitalized on the opportunity to reverse Yalta; NATO members could reassert their moral authority by integrating Europe’s newest democracies. The allure of meeting the political standards for entry into the Western alliance helped guide through democratic transitions more than a dozen countries that long suffered under communist rule. Opening NATO’s doors also provided the alliance strategic depth and increased aggregate military strength. The defense guarantee that comes with membership serves as a strong deterrent to Russian adventurism—a prized commodity given Moscow’s renewed appetite for invading its neighbors. Indeed, Finland and Sweden have left behind decades of neutrality in order to avail themselves of that guarantee.

But despite these principled and practical benefits, the enlargement of NATO also came with a significant strategic downside: it laid the foundation for a post-Cold War security order that excluded Russia while bringing the world’s most formidable military alliance ever closer to its borders. It was precisely for this reason that the Clinton administration initially launched the Partnership for Peace—a security framework that enabled all European states to cooperate with NATO without drawing new dividing lines. But that alternative fell by the wayside early in January 1994, when President Bill Clinton declared in Prague that “the question is no longer whether NATO will take on new members but when and how.” The first wave of expansion extended membership to the Czech Republic, Hungary, and Poland in 1999, followed since by four additional bouts of enlargement. So far, NATO has admitted fifteen countries (encompassing some 100 million people) that were formerly in Russia’s sphere of influence.