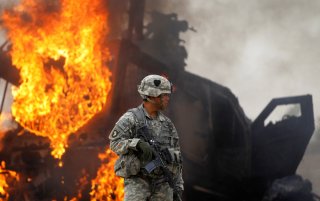 People lived their entire lives within the span of the Cold War. To them, it was forever.  For most, U.S. troops have always been in Korea. President Bill Clinton sent troops to the Balkans for one year in 1995. Troops are still there. In each case, they defend an important frontier, hot or cold, because it’s necessary for our prosperity and our way of life. If they were not there, then bad people might do bad things closer to America’s border, which would then require America to once again mount a defense at a great human and economic cost. Defending the frontier is a forever task and a good investment. There will always be a frontier as long as there are those who oppose our values and who abuse our goodwill. A vigilant tailored presence and a powerful deterrent posture on the frontier along with a demonstrated willingness to respond appropriately to either hostile or friendly intent is the best “lifetime guarantee” of both U.S. prosperity and the American way of life.

Michael C. Ryan is a retired U.S. Air Force colonel and defense senior executive who recently served as the Deputy Assistant Secretary of Defense for European and NATO Policy in the Pentagon. The views expressed in this article are those of the authors and do not reflect the official policy or position of the Department of Defense or the U.S. government.