Was That Really a Coup in Brazil? 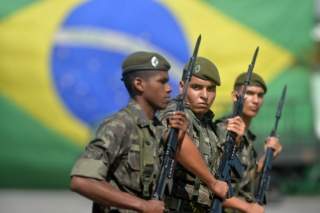 Dilma Rousseff, recently suspended as president of Brazil in an impeachment process that will likely remove her permanently from power in a few months, continues to claim she has been the victim of a coup d’etat. The claim, originated by left-wing leaders, academics, and journalists, is an affront to the countless victims of real coups in the history of Latin America's republics.

Nothing in Rousseff's conduct as president, nor that of her predecessor Lula da Silva, both of the Workers' Party that has ruled since 2003, would justify a coup. Ruining the economy (which has shrunk by 10 percent in recent years), spending gargantuan amounts of money to maintain a political clientele (the fiscal deficit amounts to 10 percent of GDP), overwhelming private enterprise with taxes and regulations (investment levels, at 15 percent of GDP, are 5-8 points below those of several neighboring countries), and presiding over a 10 percent inflation rate are economic sins typical of Latin American-style populism, not grounds for a coup.

“Lava Jato,” the corruption scheme involving bribes of some US$3 billion in exchange for contracts with public entities—started when Rousseff presided over the state-owned oil giant, Petrobras, during Lula's tenure and whose revelation is having consequences comparable to Italy’s “Mani Pulite” in the 1990s—is grounds for protests, judicial probes, parliamentary investigations and law-enforcement action, not a valid reason to overthrow the government.

But that is precisely the point—the government has not been overthrown. The opposition and several allies that broke ranks with Rousseff in the wake of “Lava Jato,” backed by massive street protests that called for her impeachment or resignation, used the Constitution against her, just as it was used by the Workers' Party in 1992 to impeach Collor de Mello. But since evidence has not yet come to light that Rousseff benefitted financially from what happened under her nose, the politicians have had recourse to a different issue on which her fingerprints are clearly visible: the manipulation of the budget (“pedaladas” in Portuguese) to conceal the real deficit during her reelection campaign so that money could be directed to programs tied to her political clientele. (It worked—she barely defeated Aécio Neves.)

Following the Constitution, the impeachment process ran its course until a vote in the Senate dictated her temporary removal from power. Her permanent removal will need a two-thirds majority in a vote that will take place within six months.

The suspended president is right about some things: Her vice president, Michel Temer, who took over from her under the law, betrayed her, as did various organizations. And, yes, there was an element of political vendetta in the air as many opposition politicians who are themselves under investigation helped remove her from power with sanctimonious speeches that rang hollow. But where in the world does the political process not involve backstabbing, political opportunism and personal grudges? It was only because Lula's corrupt populist legacy and Rousseff's disastrous administration brought Brazil to the brink of the moral, political, and economic abyss that her position became untenable. More than two-thirds of the people—millions of former supporters—wanted her out. It was unrealistic to expect the political class not to seize the opportunity to impeach her.

No law was violated, no constitutional principle or passage was broken, and no use of force was involved in her suspension. In large part this accounts for the smooth transition to the Temer administration, which is now trying to enact unpopular but necessary reforms despite a big question mark over the interim president's future as well as the future of some of his ministers in relation to the ongoing investigations.

One can only hope that, unless some revelation about him gets in the way, Temer, who will not run in 2018, can render his country the same service rendered by Itamar Franco, who took over from Collor de Mello in 1992, when he resigned just before he was to be permanently removed from power with Lula's enthusiastic backing. Franco contented himself with being a low-profile, short-term leader preoccupied with putting the house in some kind of order before handing the power and glory to the elected successor.

Alvaro Vargas Llosa is a senior fellow at the Independent Institute. His latest book is Global Crossings: Immigration, Civilization and America.