Was the Iraq War Conceived in a Secret 1992 Document? 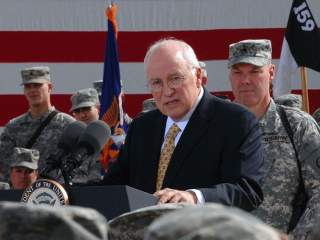 (Editor’s note: The following is adapted from the author’s new book, The Envoy: From Kabul to the White House, My Journey through a Turbulent World.)

“You’ve discovered a new rationale for our role in the world,” Secretary of Defense Dick Cheney declared, looking at me. “I read the document last night and I think it is brilliant.”

I was startled, hardly expecting such a favorable reaction.

It was March 1992 and the document at hand was a draft of the 1992 Defense Planning Guidance (DPG), the Pentagon’s traditional vehicle for providing strategic planning advice. I had been pleased that my office was assigned the task of drafting the DPG, which would inform choices for the 1994–99 planning cycle. For policy planners, periods of big change often provide the best opportunity to contribute. I saw the DPG as an opportunity to outline a grand strategy for the post–Cold War world that would guide our force structure well beyond 1999.

The policy planning shop can only be effective if the secretary is receptive to new ideas and approaches. Luckily, Cheney was serious about developing a new strategy. He was drawn to conceptual thinking and blocked out time in his schedule to engage in long, substantive policy discussions.

In Cheney’s reading of history, the United States had a record of demobilizing precipitously. After World War I, this enabled Germany and Japan to emerge as major threats. After World War II, the Soviet Union took half of Europe, and Mao won power in China. In a speech on the fiftieth anniversary of the attack on Pearl Harbor, Cheney had said, “The good news is that it’s a safer world and we can probably. . . reduce the size of the force. The bad news is it’s never been done successfully before. . .”

Cheney’s view squared with my own intuition. I was surprised by how muted the response was in the United States when the Soviet Union collapsed. The Cold War was over, and with it, the bipolar world of Soviet-American rivalry. Yet there were no celebrations commensurate with this monumental change. I expected, at a minimum, that a monument would be erected to celebrate freedom’s triumph and communism’s defeat, or that a museum would be built to document the struggle and remember the enormous sacrifices made by the Americans, victims of the Gulag, and others who had resisted the Soviet Union.

As a Pentagon planner, I was concerned that the American people, and their leaders, did not appreciate the magnitude of this event. I feared that the United States would miss the extraordinary opportunities at hand.

Among the strategists who were thinking about the U.S. role in the world going forward, there was little consensus. “We need another X,” the editor of Foreign Affairs had remarked, referencing George Kennan’s anonymously authored article from 1947. Written without attribution because Kennan was still at the State Department, the X article had analyzed the “sources of Soviet conduct” and prescribed in broad brushstrokes the containment strategy that guided U.S. foreign policy for the next four and a half decades.

The “new world order,” as the president called it, presented a particular challenge for the Department of Defense. President Bush was committed to preserving a “base force” after the Cold War of no fewer than 1.6 million troops. But it was less clear what he believed the central goals of U.S. national security policy should be and why he wanted a force of that size. In the absence of a compelling strategy, there was no logical baseline to determine the appropriate level of defense capabilities and spending.

Doves, including many of the Democrats who controlled Congress, wanted to collect a bigger “peace dividend” and spend it on domestic priorities. Their opponents in Congress wanted to protect the defense budget but were struggling to do so in the absence of a clear rationale from the Bush administration. The toughest challenge was to break out of “threat-based thinking” and pursue opportunities to shape the world.

I knew that large bureaucracies seldom produce sharp strategic insight. So I worked with a small team. At the same time, I wanted to cast the net wide for ideas and involve key officials so that they, too, would have a sense of ownership over the final product.

Throughout the winter of 1991 into early 1992, I convened discussions with a number of experts from both inside and outside the building. Our team developed a set of future contingencies that would be used to test the capabilities of proposed force structures.

The scenarios did not amount to predictions about the future, and they were not exhaustive of the possibilities. Rather, they were illustrative and, we thought, plausible.

We were not arguing that the United States should necessarily get involved in these scenarios if they materialized. Instead, our job was to identify the kinds of forces and capabilities that would be relevant should the president decide to deal with such scenarios.

Among the threats on our minds was a reprise of Iraq’s aggression against Kuwait. In subsequent years, a myth developed to the effect that the DPG set in motion thinking and planning to invade Iraq at some point in the future. This was not the case. In fact, senior officials in the Bush administration, including Cheney himself, opposed regime change in the first Gulf War.

The rapid defeat of Saddam’s armies had opened a debate on how to end the Gulf War. At first, General Norman Schwartzkopf, and then President Bush, announced that the United States would not advance further into Iraq. Senior officials believed that the devastating defeat would lead to a coup against Saddam. Yet, by leaking statements to this effect, they only alleviated pressure on Saddam. Without the prospect of further U.S. action against Iraq, officers in the regime were less willing to move against Saddam. When it became clear that Saddam’s security forces would stay loyal and intact, President Bush called on “the Iraqi people to take matters into their own hands and force Saddam Hussein, the dictator, to step aside.”

Insurgents in Basra began to rebel against Saddam. Within weeks, armed revolts broke out across Iraq. Saddam believed that his regime had lost control of seventeen provinces, with only Anbar Province remaining loyal. In negotiating an armistice with Saddam’s generals, however, Schwarzkopf permitted the Iraqi regime to fly helicopters over the south of the country. Saddam deployed the helicopter gunships to mow down his opponents, slaughtering tens of thousands of civilians.

Under Secretary of Defense Paul Wolfowitz had emerged as the leading voice in the administration arguing that the United States should aid the Iraqis who were trying to topple Saddam. I had agreed and suggested that the United States could overthrow the Baathist regime without sending large numbers of American troops to Baghdad. The United States already had F-15 pilots patrolling southern Iraq within one hundred kilometers of where the massacres were happening. They could prevent the gunship attacks and provide protection while we transferred arms to insurgents who were fighting Saddam’s military with only small arms, machine guns, and grenades.

I had been disturbed by the U.S. passivity in the face of Saddam’s massacres. Building, in part, on my ideas, Wolfowitz advocated for three moves: shoot down Saddam’s gunships, arm the Shia and Kurdish rebels, and create U.S.-protected enclaves in northern and southern Iraq.

Cheney had rejected these proposals.

When I kept raising the issue within the government, however, Chairman of the Joint Chiefs of Staff Colin Powell called Wolfowitz to complain about “civilians in the Pentagon.” At that point, Wolfowitz stood down.

The United States was less responsive to atrocities in the Shia-dominated south of Iraq. Hundreds of thousands of civilians fled to the borders of Kuwait, Saudi Arabia, and Iran to escape Saddam’s forces.

While we achieved our limited aim in the Gulf War, the outcome left unresolved the question of how to manage the continuing threat of a dangerous and unpredictable regime in Iraq.

Against this backdrop, I had, by 1992, developed a clear sense of the strategy I wanted the DPG to advance. With only 5 percent of the world’s population, the United States could not be a global hegemon. This meant that the United States would be vulnerable in the most foundational scenario we envisioned, in which “a single nation or a coalition of nations” would coalesce behind “an adversarial security strategy” and develop “a military capability to threaten U.S. interests.”