Was Trump Right to Walk Away from Kim's Offer? 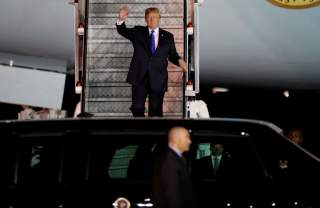 After the Hanoi Summit ended without a deal, President Trump refused to clarify whether he would allow North Korea to retain nuclear weapons. This was symptomatic of the biggest difficulty in solving the crisis. There is intense pressure in the United States to achieve full disarmament, which constantly threatens to let the perfect become the enemy of the good. A CNN Poll taken after the Singapore Summit last June showed as many as 27 percent of Americans still thought it likely that Kim would give up all of his nuclear weapons and facilities. This maximalist expectation runs counter to the assessments of two former Directors of National Intelligence; Dan Coats (“unlikely”) and James Clapper (“probably a lost cause”). It also runs against the 70 percent of the other respondents in that poll who answered “somewhat/very unlikely.” The dream of a total surrender nevertheless holds powerful sway in Washington, because of the way it shaped the Bush and Obama policies on North Korea. This maximalism hit the brick wall of reality when confronted with what turned out to be the only possible deal in Hanoi. The North Koreans were ready to freeze the development of their nuclear arsenal, but not to give up the weapons themselves. For the freeze, they wanted United Nations sanctions dialed back to what they were before North Korea’s fourth nuclear test in 2016. Trump had good reasons to walk this time, just not the ones maximalists applauded him for.

The abrupt end in Hanoi reminds the world how dangerous it would be to let the window of diplomatic opportunity close without a deal. The historical pattern is clear. When the North Koreans lose interest in diplomacy, they revert to nuclear and missile testing to develop their leverage until they feel they can get a better deal. They have already made a credible case they can make hydrogen bombs and inter-continental ballistic missiles that can reach the U.S. mainland. The next step would be for them to test enough to make them reliable and hence militarily useful. The U.S. response was typically to develop leverage through sanctions. Yet there is little that can be done beyond the current levels. The point of Trump’s “maximum pressure and engagement” policy was precisely to take the best possible shot at ending the problem once and for all. Existing sanctions already ban nearly all North Korea-related trade, investment and financial transactions. Ending smuggling from China would be a delicate affair in the midst of a trade war and mounting rivalry with Beijing. Meanwhile, military action against North Korea could rapidly escalate into a nuclear war and is hence strongly opposed by America’s ally that is first in the line of fire: South Korea. We would be back to the explosive “fire and fury” impasse of 2017. It could even be worse than that if North Korea also started selling its nuclear weapons, material or plans to State or non-State actors to recoup sanctions losses. At this point, they have little left to lose.

On Offer: Stopping the Development of the Nuclear Arsenal

There are two aspects to freezing nuclear development: stopping the production of nuclear material and stopping the improvement of bombs and missiles. The North Koreans addressed both in Hanoi. They proposed useful and easily verifiable measures which, with some tweaking and vigilance, can become the bedrock of trust-building and future deals with the United States. What the negotiating teams disagreed about was not the utility of these measures, but how much they were worth in terms of sanctions relief.

On bombs and missiles, the North Koreans offered to commit in writing to a “permanent halt of nuclear testing and long-range rocket launch testing.” The current moratorium is based on goodwill and is not formalized. The halt to testing ensures that North Korea cannot perfect its weapons to the point where they are reliable enough to be militarily useful. It is also not possible to cheat on a commitment to halt testing without getting caught because nuclear testing will be registered by seismographs and missile testing by satellites. It should nevertheless be clarified whether this commitment covers space launch vehicles, which use very similar technology to missiles. This ambiguity has killed deals in the past as North Korea insisted on its right to explore space.

The Price: Dialing Sanctions Back to Before the Fourth Nuclear Test

In return for Yongbyon and the permanent halt to testing, the North Koreans asked for a partial lifting of UN sanctions. They specifically asked for “the articles that impede the civilian economy and the livelihood of our people” in “five resolutions adopted between 2016 and 2017,” which visibly refers to 2270, 2321, 2371, 2375, and 2397. The distinctive characteristic of these resolutions is that they prohibited transactions with entire pans of North Korean industry regardless of whether there was a link to the military or the country’s elite. Some consider them the most effective part of the sanctions because, cumulatively, they forbid UN members to conduct almost any trade, investment and financial transactions involving North Korea. Once lifted these sanctions are difficult to reimpose because they require a Security Council resolution, including Chinese and Russian approval.

It is, however, an exaggeration to say that Kim asked for the lifting of “all of the sanctions” or even the “heart of the sanctions regime” when what he really asked for is to dial them back to what they were before the fourth nuclear test. Accepting the North Korean ask would still leave in place UN sanctions against “luxury goods,” anything arms-or WMD-related, and civilian items that have potential military uses (“dual-use” items). These sanctions were broadly interpreted and had an outsize chilling effect, shutting down in practice transactions on items as various as sports equipment, automobiles, pharmaceutical equipment, or computer software. Lifting the post-2016 resolutions would also still leave in place existing U.S. sanctions, which can be lifted and reimposed almost at will by the President or Congress. In other words, while North Korea asked for the lifting of the most damaging sanctions, lifting them would still leave in place plenty of other sanctions that can be leveraged for future negotiations.

Evaluating whether the absence of a deal in Hanoi was a good or bad sign for the United States depends on what blocked it. What transpired from the post-summit press conferences is that although Trump and Kim were close to a deal in Hanoi, Trump insisted on a particular item that Kim was not ready to budge on (“they weren’t willing to do an area we wanted”). North Korean Foreign Minister Ri Yong-ho explicitly singled out this insistence on “one more step beside the dismantlement of nuclear facilities in Yongbyon” as a telltale sign the United States was not ready for the North Korean proposal. The item was visibly related to denuclearization, as Ri insisted the proposal made at Hanoi represented “the biggest denuclearization measure [North Korea] could take at the present stage.” The item may have been some form of disarmament, but Secretary of State Mike Pompeo suggested that the negotiations did not quite get to missiles, warheads and weapons systems. Instead, the item appears to have been something “that was done a long time ago, but the people didn’t know about,” as Trump put it, and which involves at least a “second uranium enrichment plant.”

If what blocked the deal was indeed secret nuclear material facilities, then it is a good sign. Trump walked for the right reasons. It would have been a bad sign if he had walked to pressure North Korea to surrender weapons. Based on the history of negotiations, there is little reason to believe that would ever work with this country, especially at a trust-building stage. A demand to surrender weapons would also have been difficult to climb down from, risking to lock Trump into a “strategic patience” impasse that would have perpetuated danger to American and allied security. If all Trump was asking for was related to the freezing of North Korean nuclear development, though, it is likely that he will eventually arrive at a compromise with Kim. It made sense, in this case, to walk in an attempt to sweeten the deal for the United States. Foreign Minister Ri Yong-ho quickly countered this tactic by stating that the Yongbyon proposal was a final offer, a position that seemed to stun Secretary Pompeo in a post-summit interview. There is nevertheless ground for hope in the fact that Ri is not Kim Jong-un and that there is still room to negotiate on sanctions relief.