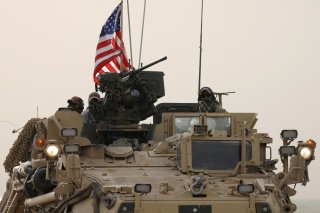 With the world’s attention focused on the Russia-Ukraine War and growing tensions between China and the United States over Taiwan, other worrisome U.S. ventures tend to fly under the radar. A prominent, potentially very dangerous example is the continuing U.S. military presence in Syria. That intervention should be objectionable on constitutional, moral, and strategic grounds, yet it retains widespread bipartisan support in Congress and the foreign policy establishment.

It is becoming increasingly difficult to justify that mission on any basis. Positioning U.S. occupation forces in northeastern Syria, the one region of the country with significant oil reserves, hardly seemed coincidental and has raised understandable suspicions about Washington’s motives. Moreover, the principal U.S. client in that region, the Kurdish-dominated Syrian Democratic Forces (SDF), is something less than a paragon of democracy. Meanwhile, U.S. troops have repeatedly come under attack, usually by pro-Iranian militias based across the border in Iraq.

As if those problems weren’t enough to cast a pall over the mission, the presence of U.S. troops is causing growing difficulties with NATO ally Turkey. Ankara launched a new round of airstrikes against Kurdish targets in northern Syria in November 2022. One attack came within 300 meters of a U.S. military base, leading to complaints from the Pentagon that such tactics were needlessly endangering the lives of U.S. personnel.

Mounting frictions with Turkey with respect to Syria are not a small problem, since the Biden administration badly needs greater cooperation from Ankara to implement NATO’s policy of isolating Russia in response to the Kremlin’s invasion of Ukraine. Thus far, Turkey’s stance on policy toward Russia has been ambivalent, and a new quarrel with Washington now has arisen over Ankara’s growing flirtation with Tehran—a move that is helping to cushion Iran from the effects of U.S.-led sanctions. The last thing the Biden administration needs is a new round of tensions with Turkey regarding Syria.

Washington’s unwise Syria policy has been unraveling for some time, but that process seems to be accelerating. The misadventure in that country began when Barack Obama’s administration launched an effort in collaboration with Saudi Arabia, Turkey, and other leading Sunni powers to unseat Syrian president Bashar al-Assad. The underlying reason for that campaign was Assad’s close ties with Iran; indeed, Syria was Tehran’s principal ally in the Middle East. The Assad family also was a longtime Russian client. Therefore, as far as U.S. officials were concerned, Assad’s regime was guilty of not one, but two unforgivable sins.

Syria’s Middle East adversaries fomented a Sunni-dominated revolt against Assad’s government, which garnered most of its support from religious minorities in Syria, especially Christians, Druze, and Assad’s own Alawites (a Shia offshoot). Washington increased its support for the Sunni campaign and highlighted the Syrian regime’s human rights abuses while ignoring equally egregious offenses by rebel forces and their autocratic foreign sponsors. The Obama administration tried to portray a brass-knuckles power struggle as a morality play featuring Assad as a monstrous villain and his adversaries as noble freedom fighters. U.S. policymakers persisted in that approach even as evidence mounted that many of those “freedom fighters” were Islamic jihadists—some of whom were even affiliated with Al Qaeda.

Russia’s 2015 military intervention to support Assad doomed Washington and its Sunni partners’ hopes of a rebel victory. Nevertheless, the Obama administration refused to abandon its ill-starred crusade. Indeed, it already was busy in 2014 and 2015 escalating America’s involvement by deploying U.S. troops over the strenuous opposition of the Syrian government. Such behavior made a mockery of Washington’s lectures about the need for nations to respect a “rules-based international order.” Syria was a sovereign state and a member of the United Nations, yet the United States brazenly deployed its forces in that country without the consent of the recognized government.

The intervention has persisted even in the face of growing tensions with Ankara. President Recep Tayyip Erdogan originally was one of the biggest foreign sponsors of the anti-Assad insurgency. However, his enthusiasm has faded dramatically as it became clear that one of the consequences of the rebellion was to create opportunities for Kurdish separatists in northern Syria along that country’s border with Turkey. In response, Erdogan warned President Donald Trump to relocate U.S. forces that were deployed in Kurdish territory. Trump finally did so on the eve of Ankara’s military intervention in October 2019 to clear the border area. Despite that redeployment, U.S. troops came under fire from Turkish artillery during the offensive.

The response in the U.S. political and foreign policy establishment to Trump’s prudent move to at least get American military personnel out of the line of fire highlighted the extent of its zealous support for continuing the ill-advised mission in Syria. Congress had never authorized the Syria intervention, yet a bipartisan hawkish coalition, led by neoconservative Rep. Liz Cheney (R-WY), pushed through a resolution denouncing Trump for even considering a withdrawal of the illegal U.S. occupation force. Despite official accounts insisting that a mere 500 American troops were stationed in Syria, evidence indicated that the actual number had ballooned to between 2,000 and 4,000.

Matters have not become either more constitutional or coherent under President Joe Biden. The Syria mission just seems to drift on, as though it were on autopilot. However, the circumstances are becoming increasingly dangerous. In October 2022, Syrian Kurdish leaders pressed for even greater military support from the United States. The SDF’s commander specifically called on the president to prevent a full-scale Turkish invasion to end Kurdish control of Syrian territory along the border. The Pentagon is expanding its ground patrols, creating the risk of a direct clash with Turkish forces.

Another quagmire is beckoning. Unfortunately, the usual suspects in the U.S. foreign policy blob may succeed in their efforts to deepen Washington’s involvement in Syria’s complex civil strife. The Biden administration’s reckless meddling in the Russia-Ukraine War assuredly is more dangerous, since it involves the risk of a confrontation with a nuclear-armed power possessing delivery systems capable of striking targets anywhere in the United States. Nevertheless, we must not lose sight of the growing, multiple perils in Washington’s Syria intervention.

Ted Galen Carpenter, a senior fellow in defense and foreign policy studies at the Cato Institute and a contributing editor at the National Interest, is the author of thirteen books and more than 1,100 articles on national security and international affairs. His latest book is Unreliable Watchdog: The News Media and U.S. Foreign Policy (2022)